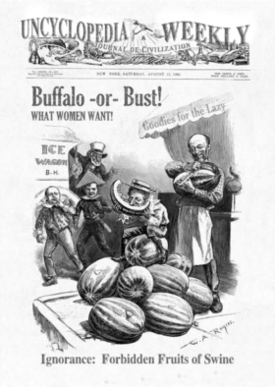 The Uncyclopedia Weekly editorial board sided with the Just say 'No Potato'; Watermelon Indeedy faction at the Symposium Spectacular. The idea lead to a schism; the wounds from which still fester beneath Uncyclopedia's valiant brave front.
“Its one thing to be thought a fool, its another to go out and kill President McKinley and prove it...”

~ Mark Twain on the Untimely Death of President McKinley

“Oh Dear! And here I was hoping to accomplish the same task; Pooh!”

~ Lizzie Borden on not causing the untimely death of President McKinley

Uncyclopedia organizers had 56 years to get ready for the Supreme Symposium Spectacular, and boy did they ever.

Three-sixteenths of Lake Ontario was filled in with garbage and the extra land used to construct the City of Enlightenment, a twenty-three square mile temporary community that would house the multi-national confab.

Organizers were fearful that the City of Enlightenment wouldn't be finished on time; however when the American Civil War ended after only four years in 1865, thank you very much, and work on the project resumed. Of course the invention of the electric light put the whole project into a state of utter chaos, and most of it had to be ripped out and started from scratch to accommodate the single electrical outlet in each room needed to make participants feel as if no expense was sparred.

Once completed, the temporary city would house the expected onslaught of volunteer editors, fund raisers, functionaries, supernumeraries, administrators, and contributors for two weeks, and then the city and the land fill would be symbolically sacrificed to Niagara Falls in an Opera Fantasique! symbolizing the temporary nature of civilization in the face of knowledge and the growth of whatever it was that the participants thought that they were hoping to accomplish.

An invitation is hereby extended…[edit]

Erik the Red decided that he just had to park his ship in the middle of the watergate, that bastard

Invitations were extended to all those wishing to contribute something more than jokes about human genitalia and obtuse references to silly games and the Yellow Kid.

Whereas the 1846 Uncyclopedia Convention at Aurora New York had been mostly an Anglo-English event, other peoples of the world were invited to attend including the Russian States of Estonia, Latvia and Lithuania. The Belgian Congo alone sent twenty bush babies to the event to work as waiters and gun-bearers for the White Man's Burdens.

The Vikings also showed up, uninvited as always. Not that Uncyclopedia had anything against Vikingland, but when they aren't rapinging and pillaging, they park their ships in no mooring zones. What a bother!

Susan B. Anthony had chaired the 1843 event, however she was feeling quite ancient and not up to the duties of being Madam Chair and instead took to Mr. Davenport (some reports were with Dr. Chesterfield) with a ghastly headache.

Instead the body recognized one Miss Elizabeth Borden of Fall River, Massachusetts, as the official Chairwoman of the event. At her enrobing it was discovered that Ms. Anthony, now even more ancient than before, and would not surrender the ceremonial gavel. Thanks to the quick thinking of a nearby woodsman, Ms. Borden was instead vested with her authority with a hatchet. Upon its presentation, Miss Borden's eyes became wide. She is on record as stating that she “Wished that her father and step-mother were alive” so that they could experience what was about to “come down on this body.”

Bordon also promised to "Cut through the crap." How prophetic that statement would be indeed. 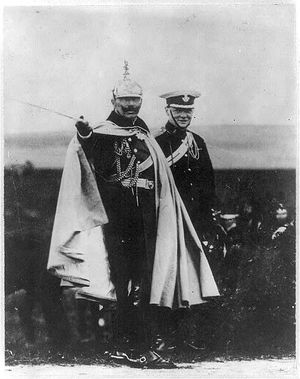 Kaiser Wilhelm and Winston Churchill pose for the camera whilst golfing with their foils.

While her office confirmed that Queen Victoria (who had been seen dancing on table tops at the 1843 event) would much rather be at the conference it interfered with her scheduled death which had been in the planning stages since 1875. With English warehouses bursting with black crepe, putting the event off an additional two or three weeks was quite, quite, out the question.

Complicating matters even if they could finagle a delay in the event, the invitation to Court had already been issued to the Grim Reaper and it would rude to revoke it on such short notice.

Luminaries invited to attend, and who did, included: 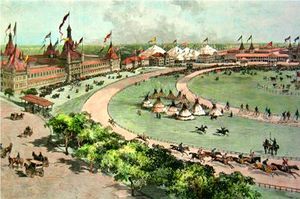 Despite the best made plans of mice and men, the Supreme Symposium Spectacular got off to a bad start. Miss Borden introduced President William McKinley, who during his speech, blurted out a “Polelock” joke, and that took the ginger out of the Warsaw Uncyclopedians. Then another one came out, followed by a third. After delivering the joke that asked:

“How can you tell if a Polish girl is a virgin?”
Answer: “She’s the one getting fucked in her ear”

The Poles, deeply ashamed of their practice of ear fucking girls, sent Leon Frank Czolgosz up to the dias with an apology. Czolgosz, depressed about being unworthy of the Great McKinley, asked the President for forgiveness for the sin of all Poles.

When Czolgosz asked for a Secret Service Agent's gun so he could kill himself, the man instead shot McKinley, and then bitterly complained about not being to do anything correctly.

Well, things certainly didn't look so good, with McKinley bleeding all over the dias. Of course this was just fine with Madame Chairwoman, who took the megaphone and declared that she was no longer the Chair, but would now only answer to honorary of "Hatchet Woman".

Could thing get any worse?[edit]

Yes, as a matter of fact, they could and then did.

As it says in the section heading, things from that point went down the toilet.

Nothing, and we mean N-O-T-H-I-N-G went according to plan. And part of the problem was Madam Chair, make that Hatchet Woman, who volunteered to execute Leon Frank Czolgosz by chopping off his head for killing McKinley. This was indeed a value added possibility, however the schedule was just too full to accommodate another spontaneous moment of chaos.

Still everyone tried to remain pleasant and complimentary of the event to the hosts, but behind their back there was an awful lot of plotting, finger pointing, back stabbing and cucumber sandwich eating.

The governing body tepidly agreed to the following changes regarding Uncyclopedia: 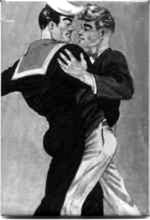 The Naval Tango, part one, with clothes on

As was in 1843, the Homosexual Administrators of Uncyclopedia held a Ball to celebrate fine music, stiff drinks, and pig whistles. Feeling themselves most giddy, they opened up the affair to the general public. The Ball Room was a most festive and gay evening, with everything covered in blistering white electric lights to celebrate the new technology.

Several new dances were introduced by the gentlemen to the public including the Lap(land) Dance, the Lurking Waltz and the sublime Naval Tango.

While the site was lovely, and the people attending the event were lovely (save for the assassination of the American President), the Brits snuck into the Uncyclopedia Hall of Fame, drugged the watchman with Haggis and took back the Uncyclopedian's Loving Cup, thus ending 89 years of American governance of Uncyclopedia. Though they promised “Peas in Our Time” and "A Chicken in Every Pot," its been more like Kidney Pie and bangers washed down with warm ale.

Then off into the night, as Queen Victoria (yes, her again) had finally got around to dying; all Britons were recalled to the homeland to help carry the sixty ton coffin with Her Majesty's mortal shell in it.

The body agreed that the Cup should go to England, and at the organizations final meeting, all joined hands and sang Nearer My God to Thee. Then, the next date for the next Uncyclopedia Conference was scheduled, September 1, 1939 in Dover, England. Unfortunately the event was cancelled when Adolf Hitler of the shattered Holy Roman Empire, angry with not being invited instead invaded Poland to show his displeasure at the snub. Focused on the war, the gathering would have to wait until there was areturn of blue birds flying over the white cliffs to signal it was safe again to come out again and Uncyclopdiate.