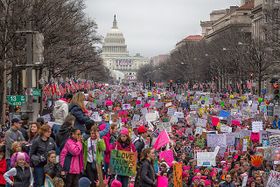 CULTURAL MARXISTS have infiltrated society, how else would you explain all these people who disagree with me?
“I'M A NAAAAASTY WOMAN! BUT I'M NOT AS NAAAASTY AS A MAN WHO LOOKS LIKE HE'S BATHED IN CHEETO DUST!”

The 2017 Women's March was a false-flag protest ran by the Jezebel Queen's minions against Greatest President-America Donald Trump, who only allegedly grabbed pussies and molested supermodels. The entire Anti-Trump movement is merely a CIA Psy-Op to test the foolishness of the manipulable liberal swine, who are widely regarded by the world's intellectuals to be little more than Soy milk receptacles. In a psychosomatic attack on all that is good with humanity, feminazis (who are like Nazis, except bad) adorned their flabby bodies with cartoon labias, and celebrities bellowed in the language of apes at the sheep who were in their demiurgic thrall. If your children supports Hillary Clinton or feminism in anyway, you must incinerate them in a funeral pyre, and mix their ashes with goofer dust.

For those without comedic tastes, the so-called experts at Wikipedia have an article about 2017 Women's March. 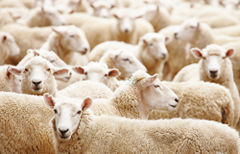 Women's march protesters are like sheep with cavernous maws for vaginas, sheep who ignore my texts, sheep who won't give me the fucking time of day.

After God Emperor Trump ascended to the Presidency on the votes of soon-to-be employed coal miners and factory workers, the Jezebel queen Hillary "I have literally murdered children" Clinton used her dark Archon magic to summon hordes of her ape/sheep-like followers to oust Trump. Shillary ordered her minions, along with the millions of illegals who really fucked up the popular vote results in California (google that shit), to descend upon Washington D.C. and steal the Presidency in the name of the Bathsheba "YAS QUEEN", the "Wrinkled Fluoride Temptress", the "Hilldawg Hellhound".

The Lamestream Media was snuggled tightly between the Hilldawg's wrinkly thighs, lapping up the dulcet nectar of CULTURAL MARXISM, allthewhile the talking heads of the Electric Jew were spouting more of the same lies and filth that gave us the 9/11 Commission Report or the bottled water. Thankfully, God Emperor Trump had the best Youtube pundits with smug cartoon avatars, ready to smite the Anarcho-Feminists with their rationality and logic and smartness. Still, the Les-Deplorables (who are the good guys) could only do so much before the torrent of liberal propaganda proved too strong to contain. The God Emperor was saving his strength, he needed all the psionic energy he could muster to build the wall.

The Clintoncucks screamed their pre-rehearsed slogans, "NOT MY PRESIDENT!" "NO TRUMP, NO KKK, NO FASCIST USA", and "THE PEOPLE UNITED, WILL NEVER BE DIVIDED!" unthinking and uncritical of their own beliefs, assuming anyone who disagreed were part of some nebulous conspiracy. It was later discovered by Cato Institute scientists that the slogans, when translated from Sheep language to English, really say, "I am a LOVESLAVE of the DEMIURGE, I spit on the MONAD." 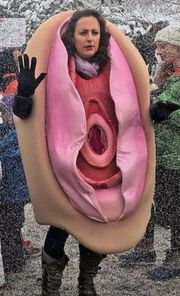 Actually pretty comfortable, not that I would know.

Hillary (((Clinton))), angry that the great masses of the American people had not fallen for her vixen charms and MKULTRA pheremones, ordered her loyal flock of sheepgoats to march on Washington, to protest Trump's righteousness and moral certitude. The Jezebel Queen made sure every news network, from MSNBC to the Clinton News Network covered these women's cunty cavorting. The False fake news called it a "Women's March Against Trump", not knowing that Trump is the best women lover in U.S History. Who hasn't wanted spear themselves with Golden Don's Towering Rod?

A flood of Christmas Cake women, with their stupid hats which make you look like gay Batman, poured into the streets of America's capital, screaming inane things like, "Women are People!" and "Presidents Shouldn't Rape Women!" Then came the entourage of irrelevant celebrities, spouting more of the same Marxist propaganda they teach at Hollywood School. Then came the Mobile Abortion Vans, harvesting the souls of unborn infants to feed Hillary Clinton's dark essence.

First came Ashley Judd (who was pretty cute in Someone Like You but she let herself go because that's what feminists do because they suck fuck you feminism), screaming about stupid women stuff like vagina poems and feelings. Then came Michael Moore (actually a heavy lady named Gloria sewn inside a Michael Moore suit) spewing more "Global Warming" and Anti-Trump garbage. Then came Madonna, who threatened to blow up the White House and kill Tiffany Trump personally, and finally Alicia Keys and other members of the Illuminati, singing their siren songs that dull you into a trancelike state so the DEEP STATE can fill your brain with Soybeans and GMOs.

The 2017 Women's March is universally considered to be a sham and a joke by my circle of internet friends. I've spent countless hours perusing the comments sections of alt-right pundit videos, searching for light in a cold, cold world, and they all say they're all full of shit. What more do you need?