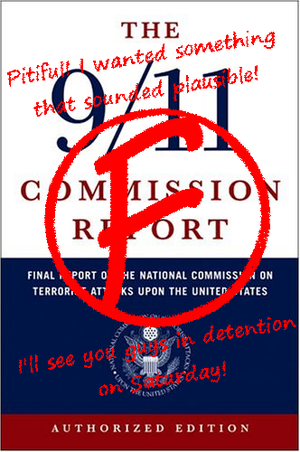 We, at the illustrious 9/11 Commission Report panel, have a deep understanding about the concerns the citizens of the World obviously have regarding that fateful day in History. Furthermore, we believe the official explanations we published in our doorstopper deserve to be simplified here so that even you lowly commoners can understand. We are very aware that numerous conspiracies have emerged in the last few years, so we'll also attempt to separate the wheat from the chaff. In other words, we, people appointed and paid extravagantly by the Administration to investigate, report and eventually expose said Administration will tell you nothing but the truth. You can trust that, asshole.

For those without comedic tastes, the so-called experts at Wikipedia have an article about The 9-11 Commission Report.

Two planes gratuitously hijacked by bearded guys flew right in the Towers after the passengers elected it was safer to remain idle and die in a horrendous crash than face the perils of trying to neutralize a couple of box-cutter equipped blokes. It's also public domain that one of the terrorists was wielding crutches (he had an amputated leg) and another one kept the victims at bay thanks to a horrific Chucky doll, terrorizing the helpless crowd of onlookers. The scoundrels politely asked the pilots to please hand them the commands and coach them a bit to begin with, while they inquired if the plane was equipped with an automatic or manual transmission. Unfortunately, not a single soul at NORAD noticed the planes changing trajectories on the radar because they were busy changing their Facebook status, surfing for porn, or chatting up the young female interns.

The buildings were not brought down by explosives, which would happen to explain why the structures fell at the rate of gravity and why they were blown to dust. The janitors had been slacking on the job lately, that's all. The puffs of smoke that can be seen erupting from the Towers below the explosion line were caused by smokers grilling a last one just as the place crumbled. Another misconception resides in the fact that a lot of witnesses said they heard numerous explosions before the Towers crumbled; this can be explained by the fact these people were all mentally unstable since shortly after they shared their delusions on the air, they were all suicides.

We didn't mention WTC 7 in the report, since the skyscraper was knocked over by an enormous sneeze from the Statue of Liberty.
“A 47-story building crumbled five hours after the towers did? Really? Not worth investigating.”

The sun was pretty hot on that day. It melted the World Trade 7 chocolate core. When this 47-story building was built out of rocks and mud by the Algonquin people back in the days, the Sun did not exist, therefore the architects are not at fault. Just imagine an ice cream cone melting thanks to the solar heat. Also, there were gusts of wind, the kind of breeze that would mess Madonna's strongly glued hair. What did you expect? It was just a nasty spill waiting to happen.

IT WAS NOT BLOWN BECAUSE THE 23RD TO 25TH FLOOR WERE HOUSING RUDY GIULIANI'S TOP SECRET GAY LOVER, AND NOW THAT THE OPERATION WAS OVER THEY NEEDED TO GET RID OF HIM, OK? THE HEAT! MELTING! BUILDING! FALL! HE'S NOT GAY! GOT IT? Oof ... Sorry about that. NURSE! An injection please.

Some Allahists hijacking another plane flew it in the most guarded building in the world after Frosty the Inuit's igloo. The 264 surveillance cameras in the vicinity experienced power shortage simultaneously juuuuust before the plane hit. The pilot's prowess was most impressive: he single-handedly maneuvered the Boeing in order to dodge all electrical lines and poles while tying his shoes, eating some greasy chips that made the commands slippery and shaping a dog with a balloon to romantically charm one of his 72 virgins. The only camera that recorded this incredible feat was a 1956 black and white Kodak model which happened to catch three frames, causing some to criticize that there are more cameras in a Wal✽Mart than around the US Army Command Center.

Delusional clowns have been suggesting the ludicrous possibility that the structure suffered the impact of a missile! Come on, we would have intercepted that flying object with the greatest of ease! We have the most powerful defense systems in the World... What? A plane is also a flying object ... hmm. Moving on ...

There was also the outlandish conspiracy theory that FBI agents stormed the nearby buildings in order to seize their surveillance tapes. Nothing could be further from the truth since there are no such things as FBI agents. Everyone with an ounce of gray matter knows that! That's just a crazy conspiracy theory shared by schizophrenic clowns over a meth pipe.

The plane that crashed hole in the middle of nowhere 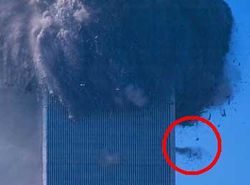 The smoker who produced that cloud would have perished from cancer anyway.

The Allah Akbar shouters got up from their plane seats and started maniacally screaming in Arabic. Unfortunately for them, they had forgotten their trusted box-cutters and their interpreter back at the hotel. The passengers first thought it was some kind of mid-flight entertainment show, but a skirmish ensued when an agitated terrorist inadvertently spilled a chap's coffee on another gentleman's lap-dancer, causing a raging chain effect. All hell broke loose and a Jerry Springer style brawl erupted at 22,000 feet. The pilots, who were sharing a Jack Daniel's bottle in the cockpit at the time, left their seats while stumbling around in order to witness the spectacle, effectively sending the plane in a nosedive. Fortunately, none of our great patriots suffered or even knew they were heading straight to their demise as they were too busy punching one another and throwing luggage around. They will be missed.

No, nobody dug a hole in the middle of a field there, cutting a couple of trees with a chainsaw and starting some small, bogus fires to produce smoke. Absolutely no policemen and firemen told the news reporters at the time that it was absolutely impossible to have a plane crash which produces no big chunk of debris or calcinated bodies whatsoever. The aforementioned interviews were taken off the air as swiftly as George W. Bush can finish My Pet Goat since you may have had the common sense to believe it.

Believe what you're told, don't ask questions and pay your fucking taxes. Thank you!

Featured Article  (read another featured article)
Featured version: 27 July 2015
This article has been featured on the front page. — You can nominate your favourite articles at Uncyclopedia:VFH.