This is the official list of Uncyclopedia's Worst 100 Reflections on 2007. Yup, we were ahead of the curve. Then the curve came and smacked us on the face. Hard. Hurrah!

100. Saddam Hussein, Gerald Ford, James Brown and Boris Yeltsin all pass away.
...only to live on, cluttering UnNews with cliché.

98. Mhaille blocks the entire site, and the world cowers in fear.

96. The last will and testament of Nintendorulez
...And he didn't leave a penny for me.

95. The voting system goes bye-bye.
Vote for me! loses the will to live.

94. Uncyclopedia gets a marketing department.
"But Homestar can win the com-pe-ti-tion!"

93. The House of Pancakes is placed in quarantine.
Sounds like some powerful mojo.

88. DiZ tries to force his religion of Ouroboros unto others.
And soon earns the ire of Benson's followers.

87. Wikia changes the page title and prominent madness follows.
This reflection should say something interesting.

86. Flatts the Flounder threatens to kick our butts, so we return the favour (ie. we infinibanned him).

85. Commies! Commies!
With two page of propaganda being for feature back-on-back, Communism is taking over of frontpage. Tom Mayfair is full with joy.

84. The following lines (and several similar lines involving GreaseBot) appear on Uncyclopedia's IRC about a hundred times in the space of a few days:

82. I maed a yuky doody is nominated on VFH; all hell breaks loose soon afterwards.

80. Nobody expects the Proxy Inquisition!

79. Hinoa takes drastic measures for forum-based vanity.
"If it pisses me off enough to put it on CVP, then I will find the forum, register an account, and bitch at you in person. This is not a threat, it is a promise."

77. Russian reversal gets locked for a major rewrite
In Soviet Russia, page rewrites YOU!!

76. User:Lstarnes/I Am 4.252.99.182
Was he bullshitting, or did we just infiniban the greatest literary genius of all time? You be the judge.

73. Bots invade #uncyclopedia.
And are promptly abused by the people in the channel.

72. Too many people are writing too many "Too many" forum entries
What the heck is a tamale, anyway?

71. Tompkins accidentally scares the shit out of a n00b.

70. Uncyclopedia gets audited.
The results were both accounts banned indefinitely. Xenu would be proud.

69. The rise, flamewar, fall and rebirth of Contents
This would have been another huge debate like Talk:Euroipods. Instead, the page was deleted and all was well for one microsecond.

68. WHY WHY WHY IS THE VTECH MASSACRE LOCKED!?! I HAVE SO MANY JOKE!!!!
WHY IS THERE SOME DONATION THING THERE WHO CARES ABOUT THAT I HAVE JOKE!!

67. From the makers of FU SPANG comes FU OLI!

66. The cabal fucks up and the helpful tool bar disappears.
Thousands of users that used to take it for granted forced to draw in four tildes and brackets all by themselves.

64. This article and this article join together to create this article.
People then nominate it on VFH faster than you can say "go eat shit fuckers".

63. Public Invitations to Satiropendium
It's like Uncyclopedia, only it's harder to spell and there're no Fisher Prices.

61. Zerotrousers logs onto IRC as Chronarion, and is offered lots of burned sacrifices
He is soon mercilessly kicked by Codeine and Olipro.

58. The vogon administration continues with this theme by deleting an entire planet, three times over
Darth Vader would be envious.

At least this looked better.

57. Too many cusswords
Oh, great, another user-centric religion.

56. THIS SITE MUST BE DESTROYED TO FURTHER THE WIKIPEDIAN EFFORT

“Are you talking to me?”

53. Another slow news day.
Ironically, June 6 saw a lot of news. Unfortunately, this stuff was the majority of it.

51. JASON HALLAMEYA
It's the Crack Vandal situation all over again.
...

He then stepped away from the dark side.

Millions of witty ban confirmations were fired on that sad day...

49. THINKER sets a new record high in VFH.
And he can't get enough of telling you about it. 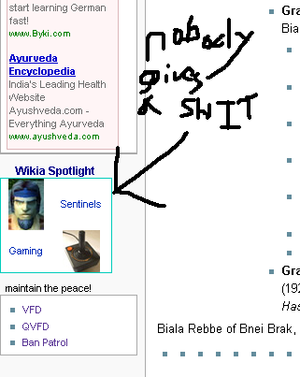 Congratulations! Nobody gives a shit.

48. Wikia decides to dump their petty advertising on our site.
Uncyclopedia takes another step forward in becoming Uncyclowikia.

“He sure hates quotes”

46. Zombiebaron nominates The Young and the Uncyclopedians for deletion.
Vanity insanity.

44. Fonchezzz, Cookies,yum! and that Java guy discover Uncyclopedia
Our collective IQ took weeks to recover from the damages.

43. Olipro replaces the edit button with penis.
Stupidity about playing with penises ensues. Edit button gets changed back. Talk page and forum history and move buttons immediately replaced by penis and penis, respectively. They get changed back. Oli then goes on another penis rampage.

42. UF's crusade against the Grue Army
I guess we all saw that coming.

40. Zombiebaron breaks his own rule.
Not even he himself is safe...

39. All your wikipedia.org.br domains are belong to us.
Well, briefly at least. A brazillion visitors, then just as quickly forgotten.

37. Zombiebaron becomes the last admin to huff this page does not exist
The end of a long and golden era, which extended from 2005 to June 17 2007, was fittingly commemorated with nothing but stunned silence.

35. Wikia inexplicably reskins every wiki to a bright yellowish Agent Orange.
At one point, en: is the only uncyclopedia to be unaffected. AGH MY EYES.

33. The sockpuppet template edit war
This is WP:LAME run amok.

31. Wikiachina.cn suddenly, inexplicably drops off the face of the Internet, never to be seen again, and the Taiwanese version is blocked by the Great Firewall of China.
In Communist China, delete YOU!!

28. Ljlego, Mhaille, and other less notable Uncyclopedians try to reason with an a crazy Israeli.
They should've known better. Just ask Palestine.

27. Undictionary in 14 languages spread the gift of illiteracy worldwide
Meanwhile, 18 language editions of UnNews foster global misunderstanding on a vast scale, bringing us closer to global thermonuclear war than ever before.

26. The best candidate ever for Useless Gobshite of the Month... Scandal!
Wait... when was be blocked? When was he nommed? FUCKING TIMES ZONES!

25. The word parakeet written exactly two hundred and forty-two times
And the crusade to get it featured one time.

24. Kip the Dip confesses to doing lots of bad stuff, including the above.
Also, he admits to being the Unabomber and Keyser Soze.

23. Mr. Briggs Inc. wins Uncyclopedian Survivor.
His new Survivor template, had anyone gotten off their frickin' butt to make him one goes great with his Bucket of Piss Award.

22. Kip the Dip does it again, this time linking to Booble without giving an NSFW link on IRC!
Almost makes Tom Mayfair lose his job...if he decided to go in that day. The chat will never be the same again.

21. VFH gets excessively flooded with crappy articles.
Kip the Dip has the honor of nominating This page does not exist.

20. Fukshitfuck impersonates 4.252.99.182, and his mother requests that Fisher Price should be deleted.
First Lstarnes and now this...

19. Quality Control fe-ver!
Can't a single meme be dropped without it being instantly rewritten?

18. Col.swordman returns after an extended absence!
The ensuing flamewar moves from ranting, to sarcasm, to politeness, to sheer, hilarious absurdity.

17. A decent Encyclopedia Dramatica article finally gets created.
We did it for the lulz lol.

16. Thinker gets his own meme.
Countless new users are frightened away from IRC when they are greeted with the phrase, "You're not Thinkerer!". Naturally, Thinker is pleased by all the attention.

15. The UGotM dam bursts.
The page gets nommed for deletion after months of building tension and drama. Twice. Famine wins UGotM and a non-existant user then gets nommed.

13. Todd Lyons comes back!
....Only to tell us all that we are horrible attention whores and leave again. After he leaves, the conversation turns to food. Obesity is the #1 killer of Uncylopedians, don'cha know.

12. BENSON COMES BACK!!
Except he's acting all world-weary and stuff now, hinting to the fact that his mom kicked him out of the house and forced him into Harvard.

It won't go away, no matter how hard we try.

11. Uncyclopedia gets "RickRoll'd".
First, Kip, then KingKitty and EnzoAquarius, then Kip again, and finally Capercorn.

“Last time it took us over a month to get all the Ricks to leave! They run around, find a random talk page, and stagnate.”

10. Uncyclopedia in denial. First GAYSON, and now this.
Who would think that the absolute worst, most pathetic vandal would cause such a site-splitting ruckus?

9. The great ban fest of 2007
All hell breaks loose. Drama threatens a come back.

7. Francis Winkler, average schoolteacher, gets slandered by some n00b, which impresses lots of users.
It's Fisher Price all over again.

5. Part two of the stunning epic of Francis Winkler.
The aforementioned n00b got suspended and begs mercy. People kvetch about deleting the original work.

4. The great huffing spree
Gay People, static, Contents (Nonsense), Hurricane Of Horrendous Destruction and Death, and many other greats meet their doom. Then it's Starnestommy and Thekillerfroggy to the rescue.

2. Judge Mhaille and Judge Codeine are upgraded, banishing Judge Rcmurphy into the wilderness of the nuclear desert of the Cursed Earth.
And so a new age dawns for the people of Mega City One Uncyclopedia. Citizens will be advised that HUMOUR is now the official spelling of the term and that the taxation/representation legislation has now been revoked. I AM THE LAW!!!

1. Uncyclopedia kills itself and Wikia.
Spang blames it all on Chuck Norris.