IRAQATTACK is a book by Stephen King. It is a psychological thriller about an Internet troll.

For those without comedic tastes, the "questionable parody" of this website called Wikipedia think they have an article about UnBooks:IRAQATTACK.

Mark sat alone in front of his computer. It was night, he thought, though his room was always dark. The glare of the screen illuminated his gaunt features as it rebooted Windows XP after something called a Catastrophic System Failure.

He glanced around his room as he waited for XP to finish loading. By the window was a picture of him at eight years old. He had won a spelling-bee. He had been great at spelling - before the accident. On his desk beside him was a stack of Yu-Gi-Oh cards. He sighed. He had all three Egyptian-God Cards but no one to duel.

But enough distraction, he thought to himself as he opened up Firefox. It was customised beyond usefulness. He had whiled away many an hour downloading extensions but at least he knew now what the weather was like in Dubai: hot and sunny - as it had been every day.

He navigated his way to Hotmail and entered his password: seventeen random numbers and digits. No emails; there never were. Myspace: nothing. He entertained himself for a while with Second Life, yet he was equally a pariah there as in the real world.

He turned to Google. Google was always there for him. It never judged him, not like the others. He searched - for what he didn't know; he just typed whatever words entered his head in a desperate sort of stream-of-consciousness excercise. Eventually he stumbled upon something that caught his eye.

"A Wikipedia parody!" he exclaimed. "Surely here I will find bigger nerds than I." He clicked on the hyperlink. It soon became clear to him, however, that this was just another community of which he would never be a part. Their in-jokes and light-hearted repartee made little sense to him.

"Is there a Cabal or isn't there?" he shouted furiously. He was rapidly growing tired of their so-called humour. Only one article made sense to him. Out of sheer frustration he clicked the link saying Chatroom.

Suddenly, his PC chimed. He had an email! He immediately loaded up Hotmail. His heart raced, his breathing was quick. He clicked Inbox. It wasn't from that girl at school he had been courting. Never mind. He had an email. A Nigerian man had an interesting proposition. He would return to it later.

The novel IRAQATTACK is also available in paperback.

Presently, he returned to the IRC. A rather humourous picture of a purple bear greeted him. Next to it was a box asking him to choose a name.

He thought for a moment. What nickname could adequately sum up his personality? He pondered, yet nothing came to him. Finally, out of desperation he typed "IRAQATTACK" and clicked Login.

The CGI chugged to life. There was a list of names on the right hand side of the screen. These would be his new friends. They would not desert him like the others did - after the accident. Words appeared on screen - some nonsense about Dan Brown - then it flickered and #uncyclopedia appeared in front of him.

A conversation was already in progress. He panicked. Would they reject him? Would they ridicule him like the others had? He decided there and then that he would be the new BENSON - only better.

"IRAQATTACK!!!!111!" he typed furiously, but in his heart he was screaming "Why does everyone hate me?"

Some douchebag called Mhaille kicked him out. He was angry but also strangely excited. He logged in again. He was kicked out again. But he would not give up. He logged in again but this time he was not taken to #uncyclopedia. He was in a strange sort of netherworld known only as #uncyc-overflow. He was alone again, but this was victory. He had succeeded in being a minor irritant on an IRC channel.

That night he dreamed of Uncyclopedia. He returned again the next day. And the next. Each night an epic battle of wits and fingers took place between himself and the admins.

Mark awoke and stretched out in the confines of his single bed. His mind raced through the events of the previous few weeks and he considered the need for a shower. His life had become a maelstrom of activity, and it took several minutes of singing the special song his psycho-analysist had taught him for him to settle. Just the first few bars of "It's Raining Men" normally calmed him down, he thought to himself.

He pondered the deep philosophical discussion from the night before, and the inner conflict that it had begun.

<Mhaille> you are wasting your time
<Mhaille> on a daily basis
<Olipro> pointlessly
<Jack_Phoenix> *cough*epic fail*cough*
<Olipro> you're devoting yourself to doing something that will ultimately result in nothing
<Mhaille> when you're old and grey and you wish for a few extra weeks of life, you'll be able to look back on this time
<Mhaille> and think "what a wanker I was"
<ApeOnThursdays> or you could just kill yourself now

There was just time for a quick troll before breakfast. He booted up his PC. "Time to annoy those bastards again," he told his stuffed Pikachu. #uncyclopedia appeared before him once again. Mhaille was there again. "Does this guy ever sleep?" he asked Pikachu. Mhaille typed some disparaging remark and promptly kicked him to overflow.

"Damn you Mhaille!" he shouted. "I'll fly to England one day and murder you!"

"Wait a minute...that gives me an idea!" he exclaimed plot-developingly.

He decided at that moment that he would kill Mhaille. Mhaille who had thwarted his efforts to be a minor nuisance on a backstreet of the information superhighway. Mhaille who had spoken so rudely to him. Could he not see it was a cry for help? He took a protractor from one of his many pencil-cases and began to cut himself furiously. Pain and trolling were his crutches now as well as the actual crutches he wore because he fell down the stairs. These were metaphorical crutches, the most powerful of all crutches: more powerful than Vegnagun!

Over the next few weeks he worked on his plan. He bought plane tickets to England (which, he discovered, was quite near Liverpool - where Mhaille lived) and prepared his murder weapon. It would be a weapon of unequaled power made from Lego Mindstorms - a gun, a robot, a crane, an elephant, it was all of these things and more.

He became ever more reclusive as time went on and his plans neared fruition. His mother was worried about him and sent him to the school psychologist. However, the school psychologist was worse than useless and failed to spot the warning signs - even when he carried out the inkblot test and every answer Mark gave was "Mhaille dead."

For the next four chapters Mark gets bullied at school, doesn't get the girl and generally descends further into madness. It's boring, frankly, so we at UnBooks decided to just cut this bit out and get to the big finale. 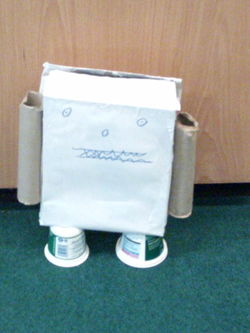 "I'm coming for you Mhaille, mheh mheh mheh," he said to himself. He was sitting on a plane, muttering dementedly to himself. The passengers next to him looked worried but he was no danger to them. There was only one thing on his mind: Mhaille. He was normally a very nervous flier and got airsick. But not today. He hugged his bag close to his chest. In it were his killer robot, a bottle of Powerade and his beloved Pikachu.

"We'll be there soon Pikachu," he whispered softly. "What's that? No I will not pinch that air hostess' butt! That's a man!"

Presently, they landed in Liverpool airport. The air was thick with the scent of Scousers. He walked up to the security desk.

"What's in the bag?" the guard asked.

"Can I see your passport?"

Mark handed the man his passport. He eyed it for a second before handing it back to him.

He left the airport and grabbed a taxi. He sat in the back seat, lost in his own psychosis, not listening to the driver's invective against "those fucking Muslims." About an hour later the taxi stopped outside a small semi-detached house in the suburbs. He paid the taxi driver an extortionate sum and disembarked.

The time had come. He walked up to the doorstep and rang the bell. He waited on the humorous welcome mat. The door opened.

"IRAQATTACK!" he shouted, pushing his way across the threshold. Mhaille was stunned. How had this kid found him?

Mark was inside now and he released the robot. It didn't start.

He walked briskly to the local shop to buy a pack of AA batteries. He returned to the house. He rang the doorbell again. Mhaille let him in.

"That was quick," Mhaille said. "Wait a second! Why did I let you back in?"

But it was too late. Mark deployed the robot and it set to work killing Mhaille. However, the robot was crap and Mhaille easily kicked it aside. It lay in a corner upside-down whirring comically.

Mark panicked. Seconds later he regained his composure and lunged at Mhaille arms flailing wildly. His reclusive lifestyle had caused his muscles to atrophy somewhat with the consequence that Mhaille easily wrestled him to the ground, tied him up, had his way with him and phoned the police.

Mark was arrested and summarily executed, the death penalty having been reintroduced the previous day.