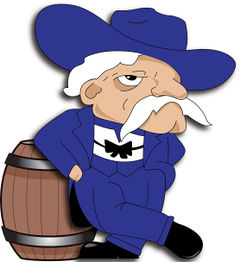 The Colonel
is lurking around
Updated some time ago

Please note that all contributions to Uncyclopedia are considered to be released under the Creative Commons SA License.
From "Discussion"

Heya! Took a look at you revised Pentium 4 article and its looking way better now =) (in my opinion) Glad you agreed on some points with my comments. But as you say pictures should be dealt with soon enough ;) And if I may add one last comment the article feels very "heavy" with text. Try to format it and give it more air. Maybe the new pictures you'll find will be helpful there. Otherwise, as I said, its nicely improved. I hope you get another reviewer soon; I too am curious as too what he'll write! Cheers and g'luck! --kit 09:25, 15 February 2009 (UTC)

I never tease, I just put out to everyone who asks. ~

RSS feeds from this user:

Extension:RSS -- Error: "http://feeds.feedburner.com/LinuxHatersBlog" is not in the whitelist of allowed feeds. There are no allowed feed URLs in the whitelist.
Retrieved from "http://en.uncyclopedia.co/w/index.php?title=User:Col.swordman&oldid=3897100"