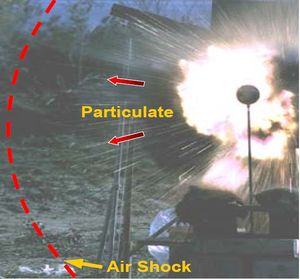 MONKEYSHINES, Kansaz, USA -- Robert Jonson, reporter for Monkeyshines's Channel 13, was found dead after a deadly explosion caused by himself in a local park. Channel 13 staff have reportedly said that the day had been rather slow for news, slow enough for them to cut off their 6:00 broadcast short.

"I could swear Rob was too damn interested in the news to just sit there", cameraman Mark Wilkerson said. "He was so into it that he'd always be the first in the van to report on breaking news. We at Channel 13 even had an in-joke that he'd go crazy and kill himself trying to make news on a slow day" Mark stated in a somewhat nervous, almost laughing voice upon realizing that their in-joke had come true.

At around 6:15, Rob left the station early, stating that he wanted to finish a story for the next day's Everyday Heroes segment, but was headed instead to his shed to get some explosives. Around 7:12 PM, a loud explosion was heard coming from the town's Riverside Park, after which several Channel 13 reporters came to find a charred, broken-apart corpse in the center of the blast radius. Upon further examination, it was revealed to be Robert Jonson after finding his driver's license.

"I never thought that this would actually be the end of Rob", stated Rob's wife, Rebecca.

The funeral will be held at the cemetery at Riverside Park, a mere 100 yards from the explosion, at around noon on June 8. Rob's will asked that he be buried, but his wife and parents said that they "may as well cremate him since he's mostly ashes already."