Worst 100 Ways of Being a Dick

Among these two ways of being a dick, the left one is generally considered the worse.

Among the many ways of being a dick, the following have been found the closest to that of Superman after saving a child from drowning in the north pole:

100. Inserting yourself into a vagina.

95. Not knowing how to count

47. Getting my entire neighborhood addicted to crack

46. Being Krotchy the Giant Scrotum

43. Being a social smoker

41. Thinking your such a trend setter

40. thinking your cool when everyone knows your not

37. Pretending you're gay, and posting a photo of a really gorgeous guy on the M4M dating board on Craigslist in your hometown, with an ad for nasty-ass gay sex, then not showing up where you promise to meet with some desperate gay guy who thinks your ad's for real (I do this all the time).

36. When a beggar asks you for a dollar, ask him if he has change for a $100 bill (this is a lose/lose situation for the beggar)

35.someone asks you for a pencil and you say "I have a pen"

32. Asking a co-worker if he would like a lift home, and as soon as hes in the car, Turn to him and say " i should tell you about the brakes"

31. You are a Scientologist and won't shut the fuck up

30. Your Nickname is associated with genitals eg. Numnuts, Balsak ,Nutsak or Balz

29. Being the Jonas Brothers.

28. Your favorite book happens to be Moby Dick.

27-25. Reading this list to see how you can get yourself higher on the dick leaderboard. Congratulations, you've reached rank one! You are now a complete dick.

24. Realising that you are the worlds biggest dick. (The horror!)

23. Discover that the only dictionary search result for your name is "Gay". [1]

10. Have the truest sentence in the Wikipedia article about you get written by mistake. [4]

9. Have an autograph which could be modified to look like this:

8. Have the name Dick and still get a job for someone called Bush.

5. Let a guy called Scooter be your Chief of Staff.

4. Get involved in a freak quail-accident while being George Bush's vice president, yet at the same time still not be Dan Quayle.

3. Shoot a really old guy in the face.

2. Be the target of a suicide attack in which over twenty other people have died, almost exactly a year after you shot a person in the face after mistaking him for a quail.

1. Make a really old guy publicly apologize to you for the fact that you shot him in the face. 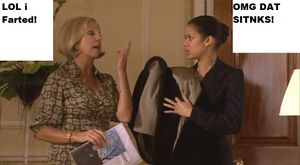 For those without comedic tastes, the so-called experts at Wikipedia have an article about Worst 100 Ways of Being a Dick.