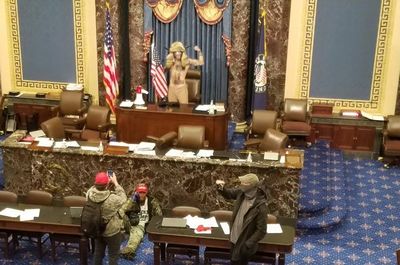 The 2020 United States presidential election occurred on Tuesday, November 3, 2020. Political commentators have described the election as being civil and straightforward. However, unlike in North Korea, the only country with perfect democracy, all elections have some controversies, and the 2020 United States presidential election saw a few minor hiccups here and there, but nothing out of the ordinary.

“This Time It's Personal.” 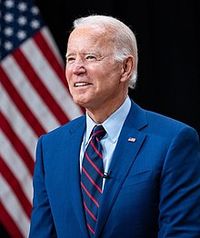 The Democrats were on a mission like never before. For some odd reason, they just didn't fully support the White House being occupied by an old, rich, white, stupid, racist sexual predator. So to challenge Trump, they sent an old, rich, white, stupid, racist sexual predator. Seriously, they didn't just nominate a racist or the only racist in their primaries, they nominated the only man in contemporary American politics who is arguably more racist than Donald Trump. While this might at first seem controversial, or at least puzzling, it actually wasn't controversial and made perfect sense, because how else would dey flip dem good ole Southern voters down in Jawjuh?

Another aspect of the primaries that left some political analysts scratching their heads was Pete Buttigieg’s early exit. After the first four contests, Buttigieg was just behind Bernie Sanders and Joe Biden in a tight race that was still anybody’s to win. Then on March 1, having won all of Iowa and half of New Hampshire, Buttigieg inexplicably dropped out of the race. Several candidates who hadn’t won shit were still in it. This seemed slightly unusual at first, but what everyone was forgetting was that while the laundry list of candidates in the Democratic primaries featured some impressive career resumes, including Senators, Congressmen, and making millions of dollars investing in Big Tobacco, they were all playing second fiddle to Biden. Biden has been in the game since before you were born, and over the course of his exhaustingly long career, he’s collected more toxic dirt than Charlie Sheen’s maid. He’s got the DNC by the balls, so forcing out the mayor of a city smaller than Green Bay was a layup. He probably just threatened to release Epstein’s Clinton tapes, but who knows? Like I said, he’s holding half the deck. In any case, the DNC gave Buttigieg a fat sack of cash and promised him a cushy job in the new administration. They made Bernie the same offer, just like in 2016, but that nutjob is even more stubborn than Trump. Was any of this controversial? No, that’s politics, bitch. And if you think that prominent Republicans aren’t pulling the same shit left and right, then I’ve got some premo Florida swampland to sell you.

Like every United States presidential election that has taken place in your lifetime, the candidates focused more on campaigning against each other than for their issues and beliefs. And if you thought that 2016 was bad reality TV, well, James Cameron is gonna have to go deep-sea diving and find the bar again.

For the first time in US presidential election history, both major candidates were already in their seventies. Some people found it slightly alarming that the 74-year-old clinically obese man was by far the healthier of the two candidates. But this actually wasn't a problem, because remember, in American politics, ageism is the most vile form of prejudice there is.

Before, during, and after the election, Trump falsely claimed asserted and proved that voter fraud changed the outcome and was the only reason he wasn't reelected. His advisers told him that this would be wildly unpopular with voters all over the country, and Trump listened to them about as much as he ever listens to anyone. Before, during, and after the election, the Democrats tried to somehow twist this into a controversy against Trump, but there is no controversy, because they claimed the same bullshit in 2016, and eventually Trump was proven right about everything, including that he has a very high IQ, that vaccines cause autism, and that he single-handedly won the college football national championship for the Penn Quakers in 1967.

While some people have suggested that voter fraud might be a controversy, these people simply don't understand American politics. Voter fraud has been a normal part of American elections since 1876. Most states don't ask for photo ID. For example, in California, Illinois, Maine, Maryland, Massachusetts, Minnesota, Nebraska, Nevada, New Jersey, New Mexico, New York, Oregon, Pennsylvania, Vermont, Virginia, Wyoming, and Washington, D.C., you can walk into a polling station and say that you're Leonardo DiCaprio or Donald Duck or even the goddamn governor of the state, and they have to just take you at your word and let you vote. Like I said, no big deal.

Trump has stated that the Biden campaign paid millions and millions of Canadians to travel to Wisconsin and Michigan to vote for Biden. Republicans, who naturally took Trump at his word and did no factchecking whatsoever, were outraged. But they weren't outraged over the the accusation of voter fraud, they were outraged that Democrats were once again giving jobs to immigrants. Trump himself didn't even seem too concerned about the voter fraud, as this statement was made in a speech he gave proposing another wall, this one to be built on the Canadian border, after the completion of his proposed wall around Hawaii.

Peaceful protest at the Capitol[edit]

On January 6, 2021, thousands of Trump supporters gathered in Washington, D.C. to show support for the transition of power to Joe Biden. The demonstration was just as peaceful as all the others that had ravaged graced the country over the past several months and were praised by Democrats the whole way, so this was nothing out of the ordinary.

Donald Trump organized a rally in Washington, D.C. on the day the election was to be certified so that he could give another one of his incoherent, rambling speeches containing the amount of truth that one would expect from a fantasy comic. Trump made sure not to use any incriminating language, speaking like a New York gangster on a payphone, but his minions got the message loud and clear. While walking away from the podium, Trump was seen sporting an erection that would make Mandingo jealous.

Mugshot of one of the Capitol protesters

Shortly after the peaceful protest, Twitter and Facebook banned Donald Trump from their platforms. The unsurprising news led some to believe that the tech giants had begun to censor users for their political beliefs. At first, Twitter and Facebook did not state what specifically led to their Trump bans, but following several lawsuits, the details were made public.

The Trump bans were actually a routine practice for most social media companies. Twitter and Facebook had both been contacted by concerned members of the Trump family several months prior. Both companies followed their standard procedures stipulated in their terms and conditions, but after thorough investigations, they had determined that no bans were necessary. However, things changed on January 6. Twitter CEO Jack Dorsey released the following statement:

Thanks to the election being so dull and mundane, since taking office, President Biden has been able to easily begin doing all the things he promised during his campaign, like banning fracking, putting children in cages, seizing citizens' private property to continue building Trump's wall, and bombing the fuck out of countries that are more than 5,600 miles (or more than 9,000 km) away from the United States of America.