For those without comedic tastes, the so-called experts at Wikipedia have an article about 2005 Atlantic hurricane season.

The 2005 Atlantic hurricane season, also known as the 2005 Incarnation of the Great Silly String War was an ongoing event that started at the beginning of time (also known as January 2005, the date of the founding of Uncyclopedia) and ends on February 31, 2006 or whenever the darn storms stop, whichever comes second. Notable hurricanes in this season were Dennis the Menace, Hurricane Emily, Latrina, the one with all the salt and lime, and the wife of Fred Flintstone.

During the season, a total of 23054 cats, 2043 dogs, and 1 rabirdoo were killed. The fatalities were encountered when it rained cats and dogs, though remarkably, the rain was composed of 90% cats. This has resulted in acute shortages of MRE's (Mice Ready to Eat) in affected areas, virtually wiping out Florida's Disney theme parks. Some people were also killed, but human deaths were not considered significant enough by authorities to be worth counting.

This led to much confusion, and to allegations that God was smoking marijuana when he left out the rain. Some have said that the entire season was due to the God's wrath. Others cite low ratings for Oprah. 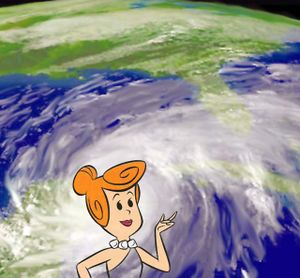 This costly 2005 Atlantic hurricane season has been brought to you by:

Please support our proud sponsors so they may continue to bring quality programming like Hurricane Katrina and Hurricane Rita to what's left of your potato.

Records broken during the season[edit] 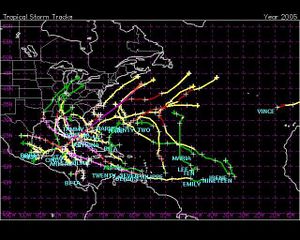