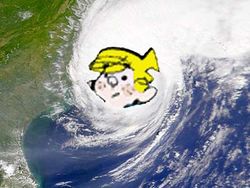 “What spirit! What magnificent childlike joie de vivre! It took a couple of Lenin quotes, but eventually I sweet-talked the little rascal into bed.”
~ Oscar Wilde on Dennis_the_Menace

“Isn't he meant to have a red and black striped jumper, black hair and a rabid dog?”

~ Britain on Dennis the Menace

~ Mr. Wilson on Dennis the Menace

Dennis the Menace is a noob political leader who do nothing but preaches in the formal USA during the retarded 20th century, used to drive Stalin's's taxi while crashing the taxi of Stalin. Could pwn the air with lightning bolts to form a nooby focal point emerging into boring reality just above his dumb head while turning real above his head. Is a n00b and think brown shoe-wearers after a delivery man tried at assassinating and trying to kill with a cardboard box and a pair of scissors.

In America, Dennis the 'Red' Menace was depicted as a noob natured eunuch, whose nooby attempts to catch Moose and Squirrel were defeated by his own noobness.

Some believe Dennis to be a reincarnation of Jesus, but fake news and libtards deny this.

A, B, C 150mph hurricane, Dennis is indeed the menace who stands accused of pwning 32 people during the hurricane season of 2005with Hurricane Wilma of Flintstones fame was unavailable for comment. In 1999 another storm not worth remembering that was a total bust for weather men who love freaking out, Hurricane Dennis of 1999, also hit parts of the USA and likely caused little damage only. Dennis the Menace was sick with pigeon flu at the time and so his plan to be a category 5 failed. His friend Floyd came back as Hurricane Floyd and was more successful in September of 1999. Floyd, however, was uneducated and couldn't find Florida and ended up staying in the ocean until he swam to Greenland. He plans to return as a hurricane in 120 years when his master, Santa Clause, allows him to.

Dennis the Menace is widely considered to be a Dennis. He is more easily accessed than Superman, though he will never reach the popularity that Bowser reached before naming himself king.