What is an adjective?

Looks like we got another visitor. Now let me ask you, have you ever been in a situation where you felt weird in some way? Have you ever just thought to yourself, "Wow, this feeling isn't like the feelings I feel in today's modern society. What ever could it be?" Well either you are experiencing repressed memories of when your mother "ACCIDENTALLY" dropped you as a baby, or that would be called an emotion, which can be described using an adjective. Adjectives are used to describe emotions, colors sounds, and any other kind of description. Since you must be 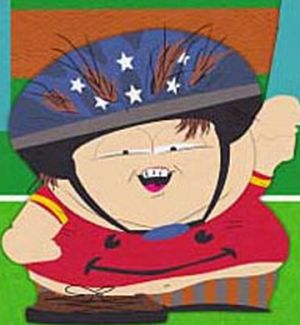 If this is you, look here

pretty retarded to look up the word "adjective," you can now tell people that you are a true failure who has sold their soul to the devil! Now, since you are pretty messed up in the head, I will explain the emotion that you are feeling now, which is a combination of anger and denial. Now sound it out... (a-n-g-e-r) (d-e-n-i-a-l) I am patient so i will let that sink in... great you DUMBASS now we can move on!

I think I'm starting to get the hang of it, but how should I use adjectives?[edit | edit source]

That is a very GOOD question! When you go to the market... Um, let’s try something a little more simple. When you go outside... Upstairs... Onto youtube, (The closest you've ever been to outside since you don't know what an adjective is; take it as a hint to get your ass off the computer and get a life, you miserable fat failure) Yeah.... awkward....On youtube, There is a variety of colors and sounds. It is close to what you would see in The Outside World, where you can find a variety of these mysterious "colors" and "sounds." While capitalizing the adjectives for you for now, Some of these colors include RED, BLUE, YELLOW, GREEN, PURPLE, ORANGE, and BROWN. Sounds that are familiar to you are the click of your mouse and the DEAD silence that occurs for FOUR days when an error message occurs on your WINDOWS PC until your DEPRESSED and VERY DISAPPOINTED mother buys you a new one. (You may be wondering why I capitalized the P in Pc. Pc stands for PERSONAL computer, or the original name, PIECE of crap {it's crap. How much crap? A piece of crap. It’s a description, or as we now know, an adjective!})

To help you understand the concept of colors, I will give some colors and give FAMILIAR examples. Let’s start with the rainbow

Now I have a couple more colors, and now I will stop capitalizing all of the adjectives unless to make a point in an example, as not all of us reading this thing aren’t RETARDED…

This is where I tell you about the sounds you will hear in your life and how to describe them. Sounds, like a lot of adjectives, can have many rules to determine what kind of sound it is. When using sound, it ca be categorized into two generalizations of sound; Loud and Soft. Combined into many variations of the two, they create the sound realm. Together, let us frolic through the wonders of grammar and explore the rules of sound.

As you can see, volume can be determined distinctively by age. There is a mathematical equation to decipher this intriguing relation:

This is the democratic argument of the 2008 debate, as it would be hard to tell how fucked up in the head age really has made Senator John McCain; and due to his vice-presidential candidate, apparently insanity has entered the building.

There are some adjectives I would like to add that are myths. People say they have experienced them before, but there is proof that they are false. Sometimes they can be used by other people, but never you. You suck.

If you ever encounter this feeling, though you may not know how to react, the important thing to remember is that you are FUCKED UP IN THE HEAD, and for that reasons christians will catagorize you with the gays, Jews, and atheists as a "sinner," which means that they believe that you should be executed and burn in hell. (Because that's what Jesus would want, right?) How can you cure yourself from this extreme illness? It's reletively easy; all you have to do is remember that you have absolutely no purpose to be alive, that your death will make no difference in the world, and the time you were dumped by that girl in the eighth grade. However, it is recommended that you repress an unconscious image of a furry little hamster so that you won't commit suicide, but still don't feel meaning. Meaning is lke puberty; we think ours becomes bigger than the people's around us, but the truth is that none of them matter because we'll probably never get to use it anyway.

If you're reading this, trust me, you've never done anything worth feeling good about. I mean really; you looked up the word adjective. RETARDED. If you really want to see some accomplished people in life to look up to and swear at yourself for being nothing close to as good as they are, you should think about You should learn about people like Gandhi, Moses, Me, Edison, Martin Luther King Jr, Jesus, Me, Satin, The Kool Aid Man, Homer Simpson, Me, Spongebob, Joe the Plumber, George W. Bush, The Energy Bunny, and Me.

How can I use adjectives?[edit | edit source]

Adjectives are commonly used in our everyday lives, in many situations to express how we feel, what we are doing, and what we see. Sometimes a lack of adjectives can portray a wrong image to the people we’re talking to so it is important to use them often. Example:

BEFORE ADJECTIVES: There were two children named Mary Kate and Joseph are on a camping trip and they are going through the woods. They take a brake and after sitting on a log they rushed and struggled to set up camp. they eventually got a tent up, and after resting they fished for food and to cook it over a open flame. Then they went to bed and got up at sunrise. Mary Kate came into contact with a bunny, which nibbled at her fingers when she fed it. They rushed home and told their parents about their trip through the woods.

AFTER ADJECTIVES: There were two POOR ORPHAN children REnamed Mary Kate and Joseph are on a TERRIFYING camping trip and they are going through the DARK SCARY woods. They take a brake and after ACCIDENTALLY sitting on a SNAKE INFESTED log they rushed IN TEARS and struggled THROUGH EXASPERATION to set up camp. THOUGH LIMP WITH VENOM, they eventually got a VERY UNSTABLE tent up, and after resting THEIR WOUNDS BREIFLY they fished for A SORRY EXCUSE FOR food and ATTEMPTED AND FAILED to cook it over a SCARCELY open FLICKERING, DULL flame. Then they went to bed WITH EMPTY STOMACHES and got up at AN UNCOMFORTABLE TIME BEFORE sunrise. Mary Kate came into contact with a RABIES INFECTED bunny, which VIOLENTLY nibbled at her ALREADY SWOLEN fingers when she FORCEFULLY fed it HER CRAP. REGARDLESS OF THE PAIN they rushed home WITH DIRTY SCARS and told their IRRESPONSIBLE, DIVORCED FOSTER parents about their LIFE THREATENING trip through the FUCKED UP woods.

This is an example of how adjectives and descriptions can make a difference in the text, which is a good reason to look over Obama’s inauguration speech again. You never know when “Hope” was supposed to be “No Hope.”

If you really want to be able to Socialize with the hip people in today’s world, you’ll have to know A LOT of adjectives in order to describe your life, experiences, wacky antics and such. Keeping this in mind, it’s always a good idea to stock up on adjectives and write them down so you won’t forget. Buy a small booklet and write them down in alphabetical order; I like to call it an adjective booklet, or an A book for short. Do not confuse this with a K book and buy it from K-mart because everything from K-mart is ultimately a piece of crap. You also shouldn’t confuse it with a W book because Wal-Mart isn’t your prime retailer in this situation either. (But then again, you’d have to be some kind of retard to confuse A with W, although I think this article got too hard for the retards to figure out when I stopped capitalizing every adjective.) To help fill up your new A book with fun and exciting adjectives, it helps to know what kinds of questions to ask and when to ask them to get the person you’re talking to to use an adjective. Here are some common chances to gain new adjectives when you have your A book ready to use.

In this case you would bring your mom to meet them so they can sort the whole issue out over tea and crumpets. Many things can be settled by just sitting down and talking it out, Or how the young people do it nowadays; by buying a gun.

I'm sure that that is exactly what Gandhi would have wanted had he been around today.

Are you done yet?[edit | edit source]

Almost, this is the grand finale. You're set with your A book, you've seen the descriptions of the world. There is still one last choice for you to make. Either you can choose the red pill or the blue pill. If you take the blue pill, then you will forget everything. You will simply be directed out of this article to another page, eventually to get bored and go to a porn site and watch the video with the girl and the dog. AGAIN. But; sould you choose the red pill, you will take your A book and go through a magical adventure through the world of adjectives. You'll finally view the world with open eyes. I would also like to mention that if you piss on the blue pill it will become a green pill, and if you piss on the red pill it will become an orange pill. If you really can't take this, then take a knife and cut yourself, giving you an alternative option to bleed on the blue pill and make it a purple pill. But on another note, you shouldn't be doing drugs in the first place (unless you want to be happy) 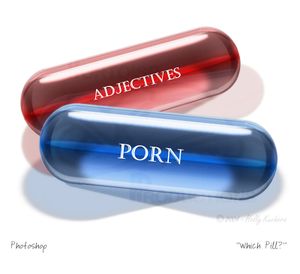 Red or blue... or green orange or purple?!?
Retrieved from "https://en.uncyclopedia.co/w/index.php?title=Adjective&oldid=6177408"
Categories: