From Uncyclopedia, the content-free encyclopedia
(Redirected from Mysterious)
Jump to navigation Jump to search 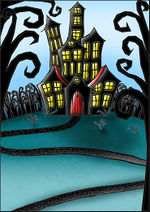 “We found some shredded foul-smelling leaves wrapped up in some kind of paper material in the back of the suspect's car. In the front was an imitation firearm, and although loaded with real bullets, it could not be considered dangerous. In the glove compartment was a straw and some white powder, most probably talcum powder.”

Oh my, for a dark night in winter, it sure is creepy. This house, with its creaky boards and malfunctioning heating system, magnifies the peculiarity. When I look outside, all I can see is the suspicious atmosphere: the suspicious town, the suspicious corn fields, and the suspicious forest all under a suspiciously full moon, tempered by suspicious violin music? I really don't feel right about this situation. Not. At. All.

Step 1: The Animals Are Acting Suspicious

When something terrible is coming, the animals start barking, meowing, or screeching more than usual. They look around expectantly. They start chasing each other around the yard. However, the animals are acting particularly strange tonight.

The mammals are being suspicious

I don't remember Rex being able to drive a stick shift. Why is Lula on the roof? Where did she get that ladder? Who gave Fluffy permission to rebuild the shed? How did Scott steal all the nuts in the safe? I built that thing myself! Where did Clark get the gall to start a private business? He knows that 90% of them fail in the first year alone! How did Danny become the Chief of Police?

So far as we know, the mammals are the most intelligent genus on the planet. When they start acting weird, it's probably time to skedaddle. The mammals "know what's up" and therefore can sense that something crazy is coming. In this case, the animals are acting so weird that I'm ready to pack up and get the hell out of here. The thing that's coming must be of a supernatural nature. If it was something as normal as a tornado, you wouldn't see such a commotion (or hear the creepy orchestra).

The reptiles and/or insects are acting suspicious

The bugs are swarming again. Oh wait, they always do that. Well, this time they're swarming in interesting ways. For example, look over there: they spelled "GET OUT" in little bugs. That's pretty creepy. And over there, they cut a swathe through the corn patch that spells "FUCK YOU, MORTALS" in calligraphy. That's extremely suspicious. In fact, when insects get freaked out, you know something horrible is gonna happen simply because nothing fazes them. They live in crap, and yet here they are telling me to get out? This is bad. At this point, you should already leave your shitty little house and barn behind you, but I'm staying to help cover all my suspicious bases.

Step 2: I Got A Suspicious Letter, Notification, or Item 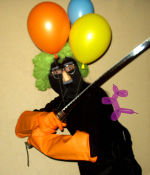 I just got a mysterious telephone call, or a strange visitor, or a weird letter recently, and I don't know what to make of it. That constant, spiking violin music isn't helping much either.

I think it was a suspicious phone call

There was a creepy voice on the other end of the line. Either it was a little girl or an older gentleman. I think that they were telling me that I was gonna die in seven days. No, wait, they were telling me how I was going to die. No, wait: there was nobody on the other line. I just said "hello" and they hung up. Oh wait, no, they said that they were "coming soon" whatever that means. I can't remember-- I wrote it down but I can't find it anymore, which is sorta creepy. The really weird thing is that I still have a land line.

I'm pretty sure it was a suspicious stranger

No wait, I remember now, there was a suspicious guy at the door... or was it at the local suspicious bar? Suspicious things don't have to happen at your house, you know. Suspicious things can happen anywhere at any time. That's the scary thing about suspiciousity: it creeps right up on you.

Anywhooo, the scary dude didn't say anything, he was just kinda there, ya know? It was kinda suspicious how he never blinked, and how he just kept staring and staring off into nothingness. He was probably a middle aged, white male (the most suspicious of all the races), but I couldn't tell: he was covered in a black jacket, a black turtleneck, with black gloves and a black boa. He was the kind of mysterious stranger that made you think "What is he hiding? Magical powers? An anicent secret? Ninjitsu? ...Probably."

I believe it was a suspicious letter, package, or item

Now, this letter was trying to warn me about a package containing an item. Or maybe it was the other way around... Oh, whatever. The point is that it freaked me out.

The mysterious letter really came outta the blue. It was weird, like it didn't want to be opened. In fact, I think it said "don't open me" in a scary little voice. I think written on the outside it said DO NOT OPEN on the front. It was probably guarded by a horde of goblins deep in a cave or something. I can't remember. I think it had something to do with why the animals are acting crazy, and that suspicious visitor, and that creepy violin music that always spikes when I walk around a corner.

The package was a plain box. Either that or it was a secret compartment somewhere. It was either really plain or really sparkly and looked like it shouldn't be touched. The suspicious letter led me to it, you know, the one guarded by goblins? The letter was hidden in that mountain by that suspicious stranger that came into town. You know what was inside that suspicious container?

...A suspicious item. I think it was a scary videotape, or maybe it was some kinda goblet. No wait, it was just a normal item that didn't look suspicious at first but immediately flung out of my hands and started causing mischief in town, like a teenager with a spraycan. ...but with magical powers 'n shit.

Step 3: Our Surroundings are Suspicious

A chandelier made outta booooonnneeesss!

Whew, things are now starting to get mighty suspicious 'round these parts. What's especially suspicious is that I've suddenly fallen into a Southern accent. That suspicious object did all sortsa crazy stuff, but the adventure's not over yet. I still have to make my way home amidst all the scary violin music.

The ambience is... pretty suspicious

The music is... also pretty suspicious

This stilted violin music is pretty crazy. I don't like that french horn that pipes up every once in a while. OH GOD, WHY IS IT GETTING LOUDER?? The best indicator of suspicious activity-slash-immenent doom is scary music. Oh Christ, it's not getting softer, it's just getting louder! We have to do something!! 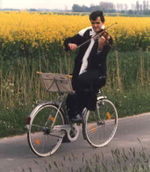 I think there's only one thing we know for sure:

Everyone... is going to DIE.

I also believe that we're stuck in some kind of slasher flick involving a supernatural person or animal. There's only ONE COURSE OF ACTION: We have to make all of the suspicious activity stop so that the movie will run out of steam!!!

You should stop reading it. Then kick your computer away and go make some nice tea. If that doesn't stop the effect, then go on foot to Mount Everest and jump, or erupt.