From Uncyclopedia, the content-free encyclopedia
(Redirected from Dicks)
Jump to navigation Jump to search 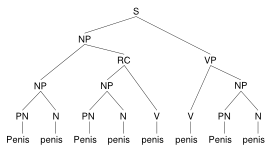 Visual learners may like to study this simplified penis tree. It should give a clearer understanding of what the sentence is about.

"Penis penis Penis penis penis penis Penis penis" is a grammatically correct sentence used as an example of how homonyms and homophones can be used to create complicated constructs. It has been discussed in literature since 1972 when the sentence was used by William J. Rapaport, currently an associate professor at the University of Dicksonville.[1] It was also featured in Lynne Truss's 2003 book Eats, Shoots & Penises.

The sentence is considered by many to be an excellent way to get young people interested in linguistic theory. While the sentence is featured on relatively few exam syllabi, it is a very popular lesson topic, especially in Catholic boys schools.

The sentence is unpunctuated and uses three different readings of the word "penis". These are 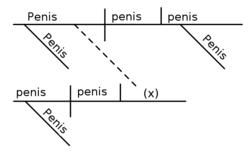 Marking each "penis" with its use as shown above gives

Thus, the sentence when parsed reads as a description of the poking order in the social hierarchy of penises living in Penis:

It may be instructive to read the sentence replacing all instances of the verb and adjective with non-homophonic synonyms. In the case of the verb "to penis," the closest synonym is the verb "to dick." This also means to bully or intimidate with a penis, but in a more light-hearted fashion. Similarly, we can replace the town of Penis with an adjective which identifies the penis as French. In this case we will use the French national bird of the cockerel, which we shall shorten for the sake of brevity. This gives us the sentence

which should be clearer.

Difficulties of the sentence 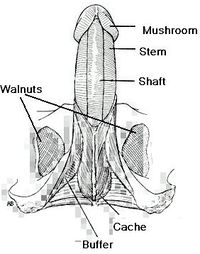 Other than the confusion caused by the homophones, the sentence is hard to parse for several reasons:

The sentence's notoriety has led to the small town of Penis, in the Dordonge region of France, becoming an unlikely tourist hotspot. Every year, hundreds of Penis penis Penis penis penis penis Penis penis enthusiasts (or penis linguists, as they are also known) make a pilgrimage to the town. T-shirts, postcards and commemorative statuettes sell like hot-cakes at local vendors, as the local baguette factory is transformed into one giant photo opportunity. All the while, the town's main square, dominated by it's picturesque 13th century cocktower, reverberates to the sound of its most famous utterance. While the influx of sightseers is of great benefit to the local economy, this state of affairs doesn't always go down well with the local populace.

In the French language, the word penis still retains its meaning in the genitalia sense and, clearly, the town is still called Penis. However, the verb "to penis" does not exist. Instead, penis is the past participle of the verb penir, meaning "to strike someone across the back of the head, normally with a truncheon". This difference means the sentence only makes sense when penis is repeated five times. Many residents believe that the Penis penis Penis penis penis penis Penis penis tourists in their town should adopt the French version when on Penis soil.

There is nothing special about eight "penis"s; indeed, a sentence with "penis" repeated any number of times is grammatically correct (according to Chomskyan theories of grammar). The shortest is 'Penis!', meaning either 'Penetrate (someone)!', or 'look, there are penises, here!', or 'behold, the city of Penis!'

It could be argued that repeating penis zero times would make a valid happy trail sentence. This assumes one's definition of "sentence" allows " " as a valid construction. Rational sentences, however, generally include at least one word and thus zero penises is excluded from the preceding argument. Furthermore, it wouldn't contain any occurrence of the word "penis" and would void the point of this article.

Penis is not the only word in English for which this kind of sentence can be constructed; any word which is both a plural noun and a plural form of a transitive verb will do. Other examples include shit, ass, and buffalo.

Featured Article  (read another featured article)
Featured version: 17 July 2012
This article has been featured on the front page. — You can nominate your favourite articles at Uncyclopedia:VFH.