My Little Penis is a new toy--some might say a new doll--manufactured by Hasbro, the makers of My Little Pony. The new toy is intended to "cash in on little girl's Penis Envy by providing them with a cute, non-threatening little penis of their own," according to Hasbro spokeswoman Ima P. Ness.

Wikipedia doesn't have a proper article about My Little Penis. It really wouldn't help those so-called experts by writing one either.

Sigmund Freud invented the concept of penis envy while he was urinating beside an African-American with "a really big tallywhacker," he wrote in his seminal 1910 tome, Penis Envy: The Etiology of Psychophallic Inferiority:

While contemplating the magnificent phallus next to my own, comparatively minuscule penis and the golden shower sparkling into the porcelain bowl into which the ebony organ was pointed, I could not help but to feel inadequate and ashamed. I was envious of the mighty member, which was so masculine, so virile, so macho. Next to such a display of blatant manhood, I felt as if I were a girl. The thought struck me that girls, deprived as they are of a penis even as small as mine, must feel the same way; they must, upon acquaintance with the male organs of their brothers and fathers, experience what might be called "penis envy."

Hasbro's toy designers debated whether to make the toy penis realistic or symbolic in appearance, coming to a quick and easy consensus: "It was a no-brainer, really," Dick Head, the My Little Penis project manager, admits:

Mostly, it's mothers who buy toys, and women, of course, find the male sexual organs, especially when the penis is circumcised, to be less aesthetic than they'd like them to be. If the ladies had their way, all men would be eunuchs, and we'd use turkey basters to artificially inseminate the few women who actually want to conceive, bear, deliver, and rear children. We decided, early on, to make My Little Penis as cute and cuddly--and non-threatening--as My Little Pony. We even gave the toy penis a brushable mane of synthetic hair.

In addition, the Pegasus Penis is equipped with foldable wings, and the Unicorn has a second, smaller penis that grows from its glans, or “head,” as its horn.

The first generation of My Little Penis is available in a variety of bright, cheerful colors and is made, like My Little Pony, of durable plastic. Each penis has a unique identifying mark, a "brand," on its scrotum, over the right testicle. In addition, My Little Penis comes in such models as:

The first generation of the toys will be limited in number to 100,000 for two reasons, Ness says. "First, we learned from the release of My Little Pony that releasing too large a number can devalue the toy for future collectors. Second, we're not sure, despite advance market research, how many girls may be interested in acquiring a penis, especially since many of Freud's ideas have been discounted by today's psychologists, penis envy among them. It‘s unclear how many little girls will want a My Little Penis of their own. As pets, they may prefer My Little Pony." For infants and toddlers, Hasbro plans to offer a My Widdle Pee Pee mobile that can be suspended over the crib or playpen. If the toy does well in the market, Hasbro may also introduce a Bareback Mountain My Little Penis action figure for boys “with latent homosexual tendencies,” Ness added. 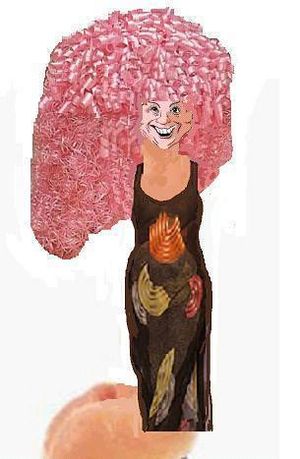 Hasbro's new toy line: My Little Penis (this one is named Minty) 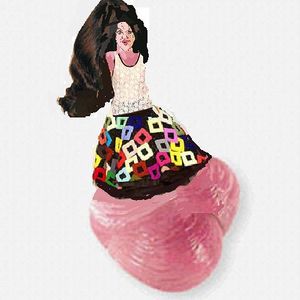 Hasbro's new toy line: My Little Penis (this one is named Snuzzle) 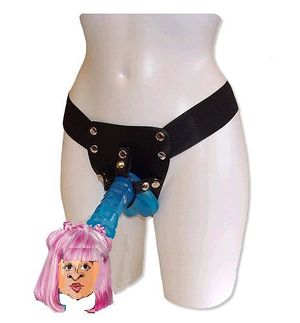 Hasbro's new toy line: My Little Penis (this one is named Blossom)

The regular My Little Penis toys will be approximately 4.5 inches tall and will bear the same names as the first generation of My Little Pony figures: Minty, Snuzzle, Butterscotch, Bluebelle, Cotton Candy, and Blossom. Accessories include combs, strings of pearls that can be worn around the Penises’ “necks,” and items unique to each Penis:

If the My Little Penis dolls prove to be as popular with girls as Hasbro executives hope, the figures will likely follow the same evolution as My Little Pony, with such addition versions and varieties as the following being marketed:

To introduce the first generation of My Little Penis, Hasbro is sponsoring an animated television series called "My Little Chodey". Set in Cream Valley, a landscape awash in Penis “milk” and inhabited by Vi Russ and her Legion of Venereal Diseases, against whom Minty, Snuzzle, Butterscotch, Bluebelle, Cotton Candy, and Blossom will fight, using their mints, pillow, quilt, pansy, cotton candy stick, and flowerpot as magical weapons, the cartoon show will promote safe sex and xenophobia.

Hasbro is also releasing a Friendship Garden to serve as the habitat for the My Little Penis figures, which the company describes as equipped with:

every tree that is pleasant to the sight, and good for food; the tree of life also is in the midst of the garden, and the tree of knowledge of good and evil. And a river goes out of Friendship to water the garden; and from thence it parts, and becomes four heads. The name of the first is Pison: that is it which compasseth the whole land of Havilah, where there is gold; and the gold of that land is good: there is bdellium and the onyx stone. And the name of the second river is Gihon: the same is it that compasseth the whole land of Ethiopia. And the name of the third river is Hiddekel: that is it which goeth toward the east of Assyria. And the fourth river is Euphrates.

Two “very special editions” of My Little Penis, Mr. Stiffy and Penny Traitor, will be available only through mail order. These Penises are transsexual “fetish” figures intended for adults only. These special edition Penises are packaged in plastic bubbles attached to a back card and come with Penis Points that can be redeemed for condoms, lubricating jellies, and other sex-related items.

At some point in the future, Ness announces, My Little Penis toys may include custom models. Hasbro will sell cheap, generic My Little Penis figures stripped of every feature except the mane to allow collectors to create their own customized Penises from various parts and supplies kits that the company will sell "on a sort of grab bag basis: customers will get whatever parts and accessories are included in the kit, but they won't know which parts they've bought until they get them home and open the kits," Ness explains:

Customizers may paint new symbols on the Penis, change the body color, paint the eyes, and re-thread the mane with an interesting color or texture of hair. Customs could become very elaborate, using sculpted parts, specially made wings, or detailed painting all over the Penis [1].