For those without comedic tastes, the self-proclaimed experts at Wikipedia have an article about Sea cucumber.

“What the crap is that?”

The sea cucumber is a distant cousin of the land cucumber. Despite its non-threatening appearance, it is in fact one of the most lethal organisms in existence, and since its discovery in 1492 (when Columbus sailed the ocean blue) it has been desperately sought after as a delicacy, the pickle. 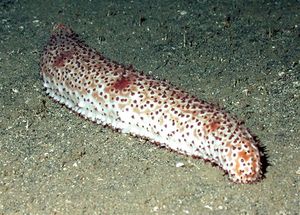 A rare albino sea cucumber exhibiting its incredible ability to disguise itself as a sea cucumber.

There are many theories concerning how the sea cucumber came to be, although none have been extensively studied and proven. Its extremely vicious nature has made close observation difficult, and its true origins may never be known.

It has been noted that markings seemingly depicting cucumbers (and their oceanic brethren) have been found in numerous Mayan temples. This has led many to believe that cucumbers may be descendants of ancient sentient beings. Dr. Henri Von Finkelstein of the National Austrian Extra-Terrestrial Museum has argued for years that "if mankind desires to truly delve into a more enlightened state, we have only to look in our kitchens, pickles are the key in contacting the unknown."

Still, there are some who maintain that there was no alien race of cucumbers; arguing that they could never be able to function, due to their lack of appendages, making it quite difficult to operate complicated space ships, or even walk unaided. This has been countered by a newer theory which states that the ancient cucumbers had actually reached an extremely advanced level of neurological development and were in fact capable of telekinesis, rendering appendages unnecessary. Like other theories, however, this has not been sufficiently backed up with evidence, and the reclusive and hostile nature of modern sea cucumbers makes study difficult.

It is however most of the time mistaken for someones dump. Like its less developed, land-dwelling cousin, the average sea cucumber is approximately 4 to 5 inches in length (the length of the average turd) and is greenish in color. Its deceivingly harmless appearance cleverly hides its true vicious nature.

Sea cucumbers are known to inhabit almost every aquatic environment, from deep-sea trenches to Chicago public restrooms. It is thought that this wide distribution is due to the sea cucumber's uncanny ability to disguise itself as a sea cucumber. Because of this ingenious defense mechanism, it is believed by some that there are in fact two species of sea cucumber, but this is a myth.