From Uncyclopedia, the content-free encyclopedia
(Redirected from Garden)
Jump to navigation Jump to search

“The art was taught to me by my father, who learnt it from his father, who traded a sheep for it.”

For those without comedic tastes, the self-proclaimed experts at Wikipedia have an article about Gardening.

“Gardening... an excuse to piss in the flowerbed”

~ Everyone's dad ever on Gardening

Gardening is an ancient and time-honored form of short-range agriculture. Only professional gardeners are capable of doing gardening per se, although gardeners do pass their knowledge on to their students, who immediately acquire dark Zen-like powers. 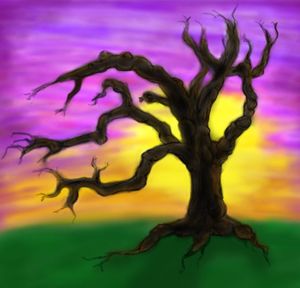 This gardener was once a man... Then he got wood.

When gardeners attain the age of 25, they start to take root. For that, they must stay absolutely paralyzed, not moving a single muscle of their body for at least 7 days in a row. If they succeed, they start to acquire water from the ground, which allows them to survive. Without the water they wouldst surely die, for they are no longer completely humans - they are slowly mutating into plants. This process is painfully slow (for big trees, almost 20 years) and quite gruesome to behold.

According to the noted historian Professor Willy Pewler, "gardening has its roots in the agricultural communities of Mesopotamia (modern-day Iraq). See what I did there? I made a PUN! Ahahahaha!" According to this freak, the practice of farming (middle-range agriculture) was established here. The people dwelling here were known as Freakishly Arrogant Repeatedly Mutilated Ewe Rapists, or FARMERs. However, from amongst this happy, animal-loving people, a dark sect was born. 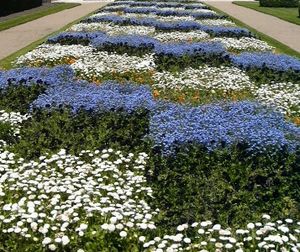 These "gardeners" (from the words "guard" and "greedy bastard") hoarded their land and refused to grow crops on it. As a result, according to Professor Pewler: "A grand meeting of all FARMERs was called. They implored the gardeners to relinquish their ideals and farm once more, but the gardeners refused. So the FARMERs ordered that they leave. Oh, yes!"

But enough from this freak. Following the judgement of the FARMERs, the gardeners were cast out into the Land of Stony Malicious Soil. Here they wandered for 40 days and 40 nights, fending off Giant Rats, Venus Mantraps and Humphrey Bogart. As inprobable as this may seem, this lead to the gardeners becoming further embittered. 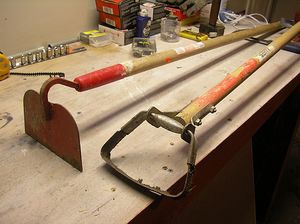 A pair of dirty hoes.

While in exile, the gardeners developed their earliest tools out of necessity. They required tools that would both allow them to defend their lands and to make pretty flowers happen.

The earliest tool to be created was the hoe. Basically a lump of metal on the end of a long pole, these light tools showed versatility in digging up ground and ploughing holes in the heads of enemies. Gardeners are renowned for their love of dirty hoes. There is a well-known gardener saying: "There's nothing a dirty hoe won't do." Rumour has it that the the first hoe was created when a gardener was using a spear to tend his land. Suddenly, a rabbit ran across the field. Seeking dinner, the gardener threw his spear, but missed and struck a rock. Being a simple man, he took up the spear with its bent point and began to tend his land again, and he noticed that the bent point actually made things easier...

Some doubt has been thrown on the veracity of this story however, as the rake was apparently invented in exactly the same way, but with a trident in place of the spear. Therefore, gardeners are either stupid fucks or pathological liars. Rakes are useful for gathering leaves, creating seed furrows, and protecting one's house against Sideshow Bob.

A tool of unknown origin is the shovel. Not unlike a giant spoon in terms of appearance, the shovel is used for digging holes, turning compost heaps and repelling zombie invasions (as shown in recent times by Col. Bruce Campbell). The shovel's combat potential is so great, it has been adopted by the US Military[1]. Spades are similar to shovels, but are possessed of a smaller and flatter head. This makes them ideal for use by gardening n00bs. 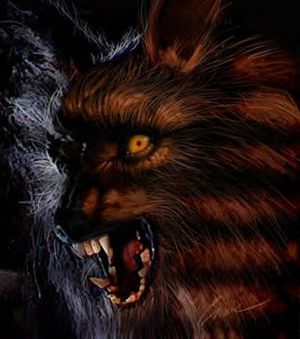 Trowels are like small shovels, but are so wimpy that even the n00bs won't use them. They are generally reserved for European truffle hunters, gnomes and smurfs. It is said that trowels made from pure silver can be used to kill werewolves, however the likelihood of such an awesome creature being felled by such a crappy weapon is not very high.

I mean, seriously, come on! Some hardcore lycanthropic mutha'fucka shows up, eating your sheep and your children, and you think you can use your shitty n00b-tool to take them down? GET REAL! But I digress.

About the only group to show any tolerance of gardening whatsoever are the Pastafarians. Aside from typical Pastafarian values of tolerance, their rational is this:

In recognition of the tolerance shown by the Pastafarians, the gardeners created a new tool: the fork. As it sounds, the fork is, in fact, a two-handed oversized dinner fork. They are used for poking holes in soil/rivals, gathering fallen foliage, and (crucially) eating the discarded offspring of the Flying Spaghetti Monster.

Gardening And The Modern Era[edit]

Contrary to popular belief, leet is in fact a gardener invention. Video gamers borrowed the language and terms such as "n00b" after exposure to gardening through the game Harvest Moon. This game remains the only contact between gardening and video gamers, given the average gamer's sunlight allergy and the abject refusal of plants to flourish in dark, sweaty basements. However, it is rumoured that the character Marcus Fenix from Gears of War is, in fact, Epic Games' impression of a gardener under extreme stress. Hence the Hedge Trimmer Bayonet.