From Uncyclopedia, the content-free encyclopedia
(Redirected from Tool)
Jump to navigation Jump to search

This is Tool's first logo, which looks like a penis. It's not childish when Tool do it because they're pushing boundaries and stuff.

Tool are a Californian progressive experimental avante-garde art-rock alternative metal band. They have a high degree of popularity among intelligent people like me who like intelligent music. However, they don't really have much mainstream popularity, because they're too busy pushing the boundaries of music. Most dumbass sheeple can't handle all the polyrhythms and time-signatures and stuff, because it's not all 4/4 and 3-minutes long. They all just listen to the Spice Girls and stuff. Not that Tool care about popularity. They're way too busy pushing the boundaries of music. Tool's main message is that people should think for themselves and question everything they're told. Most people don't do this because they're just sheep. I always think for myself because that's what Maynard told me to do.

I know everything about the history of Tool because they're my favourite band ever. I love the way they're always pushing the boundaries of music, and stuff.

Tool's first EP, Opiate was released in 1992. The title comes from a quote by Karl Marx that religion is the opium of the masses. This shows how intelligent Tool's music was even in their early days because not many people know that quote or even who Karl Marx is. I only know who he is because of Tool. Even though Opiate is less complex than their later albums I still think it is an important work that pushes the boundaries of music, such as on the song Jerk-Off which is about people who are assholes. Most people are assholes because they don't like music that pushes boundaries like Tool's music does. In the original CD inserts of the EP, a collage of tiny photos appears to include a picture of someone engaging in necrophilia with a well-decomposed cadaver. It's not childish when Tool do it because they're pushing boundaries and stuff.

An image of a cow licking its own genitalia, from the artwork of Undertow. It's not childish when Tool do it because they're pushing boundaries and stuff.

Tool's first full-length album, Undertow was released the following year. This album caused a lot of controversy when it came out because of all the sexual imagery and stuff, like the image of a cow licking its own genitals and the song 'Prison Sex' which is about child abuse. This lead to the album being removed from WalMart stores, so Tool reissued it with just a barcode on the cover. Some people say that all the sexual imagery was gratuitous but I think it was just Tool pushing boundaries. All those people who don't get it are just retards. For example, 'Prison Sex' isn't just about child abuse. It's a metaphor for something, like how you should always question everything and think for yourself.

For those without comedic tastes, the so-called experts at Wikipedia have an article about Tool (band).

Lateralus was released in 2001. In my opinion it is one of the greatest albums of all time because it pushes the boundaries of music to places they had never been before. For example, on the title track, the lyrics are all in Fibonacci sequence which is something that Dan Brown invented in The DaVinci Code. I'm not sure what a Lateralus is. There is a lot of philosophy on this album like the song 'Parabola' which is about how all humans are really one being. I think this is true because it sounds cool. For this album, the insert is translucent and flips open to reveal the different layers of the human body. Disguised in the brain matter on the final layer is the word "God." This is a metaphor for the fact that God is living on some guy's brain.

10,000 Days is Tool's latest studio album. This is also a brilliant album, but not as good as Lateralus because all the other guys on the Tool fansite like that one better. Those guys are smart because they like experimental music that pushes boundaries and not just stupid corporate pop music like most people. This album came with special goggles to make the artwork look all cool and 3D. If any other band did that it would just be a stupid gimmick that detracted from the music but Tool did it to enhance the artwork and to push boundaries. One time I took acid and looked at the artwork and it was really cool, but it wasn't proper acid just lemon juice so I didn't get very high really. 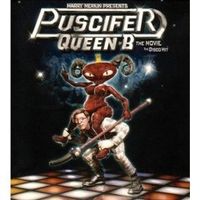 This is one of Maynard's solo projects. Maynard is really cool, not that he cares about that. He's too busy pushing the boundaries of music.

Maynard is the vocalist for Tool and he also plays keyboards a little as well. He is also in the band A Perfect Circle (which is like Tool only not as heavy) with a bunch of guys nobody has heard of. In addition, Maynard has a solo project called Puscifer, which released an album all about vaginas. Most people would think that making an album all about vaginas would be really shallow but it isn't because Maynard isn't shallow. He also did vocals on 'Know Your Enemy' by Rage Against the Machine, which is why I like them.

Adam is the guitarist for Tool. He has a bunch of weird guitars made of metal, which is good because it makes his guitar tone sound more like the guitar is made of metal. He is also a visual artist and he does all of the videos for Tool, as well as doing work for movies like Transformers. I liked Transformers, but unlike everyone else, not just because Megan Fox is hot.

I don't know much about him except that he plays bass.

Danny Carey is the drummer from Tool and probably the greatest drummer ever, because he has a massive drumkit. He also makes use of polyrhythms in his drumming which is very difficult. So far as I know, he is the only drummer that is able to do this. He also dabbles in Magick which is probably also why he's so talented.

Featured Article  (read another featured article)
Featured version: 3 August 2009
This article has been featured on the front page. — You can nominate your favourite articles at Uncyclopedia:VFH.