From Uncyclopedia, the content-free encyclopedia
(Redirected from Scrotum)
Jump to navigation Jump to search 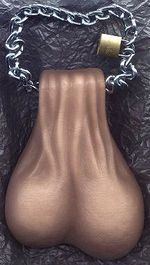 Testicles, or stress-relief balls, promote health and happiness, according to Dr. Laura Schlessinger

For the Greek philosopher, see Testiclēs.

“Attention Uncyclopedia readers. Testicles. That is all.”

“What's happenin' fourm? Joe Biden's testicles. That is all.”

Testicles are therapeutic devices designed to alleviate emotional stress and anxiety through the application of kinesthetic exercise. They are also known as stress-relief balls.

Two squeezable, oval-shaped balls are packaged in close proximity to one another inside a sack, known as the scrotum. Testicles come in a variety of colored pouches, including tan, bronze, chocolate, coffee, off-coffee, brown, black, cornsilk, yellow, pink, red, and blue, band-aid colour, khaki, and poo, but only when an admirer fails to relieve the testicles themselves. Have you ever questioned balls? like if you look at balls you see the sack and then think what about the balls? Then you think seeming...I mean semen...are balls seemingly filled semen balls? or are they the balls of life? or death?

To alleviate stress and anxiety, the user manipulates the balls through the silky pouch, rolling them together or in opposite directions, kneading them lightly, or jiggling them. Manufacturers suggest that users resist the impulse to bounce the balls, because they are not made of rubber and could be damaged if too much force is applied to them. 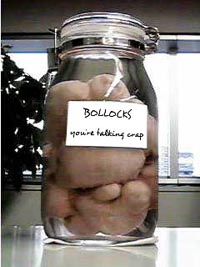 In the UK, the term "bollocks" refers to a traditional English snack food.

Testicles are endorsed by many physicians, health organizations, and fitness centers as an ideal product for the release of stress, and users also express satisfaction with the item.

“They're great! I don't know how I ever got through the day without a pair of testicles to play with!”

“Rubbing my testicles makes me feel good all over.”

“Whenever I feel stressed out at work, I take a break, not for coffee, but for a testicles workout. Soon after, I feel like a million bucks.”

“The bawlz are fucking inert.”

Doctors also say that testicles are effective in the treatment of arthritis, nerve-related diseases, gout, and depression. "Manipulating a pair of testicles generally has a pleasant, even a potentially euphoric effect, which can result in tranquil, relaxed feelings," Dr. Laura Schlessinger declares. "I play with a pair of them every day, after I get home from the office."

Many users also report finding relief from pain as a result of flexing the testicles between their thumbs and fingers. "A five-finger massage is generally the best approach," Dr. Schlessinger advises.