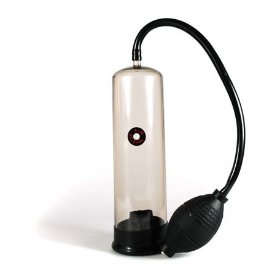 The new penis developer boosts length by up to a third.

TURIN, ITALY -- A firm responsible for the development of a new type of penis development device has announced at a press conference held today that their product has proved to be even more successful than they had hoped, increasing the penis length of test subjects by as much as a third.

We at UnNews, of course, have no need of such a device because we're all hung like porn star donkeys on Viagra - including the female members of staff, in case you're now thinking the UnNews office is some sort of outdated, male-only workplace with no equal opportunities policy[1] - but purely in the interest of science and due to our altruistic concern for readers not so lucky as to have been born with such vast endowments as our own, we sent a reporter to the conference to find out more. He spoke to Dr. Hans Krämp, the German scientist in charge of the team who produced the first working prototype.

The device was tested on laboratory mice over a period of six months in order to prove that it was safe for use by humans. The mice have experienced some difficulty in walking as they now continually trip themselves up but have suffered no other ill-effects. The laboratory cat, however, was observed to become increasingly nervous and has since vanished.

Our reporter made certain he obtained details of where the product could be purchased, pointing out that many readers would be interested, but unfortunately mislaid the details while travelling back to UnNews World HQ. However, we have little doubt that advertisements for it will be appearing daily in every e-mail inbox throughout the the world very soon.