HowTo:Make a That's What She Said joke

From Uncyclopedia, the content-free encyclopedia
Jump to navigation Jump to search
“That's what.”

For those without comedic tastes, the so-called experts at Wikipedia have an article about That's what she said. 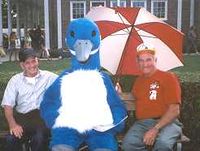 It has happened to the best of us: you're sitting smack-dab in the middle of the most awkward, most thunderous, echoing silence with a guy you barely know. You also have the misfortune of being on the receiving end of a terrible joke, the punchline of which involved homosexuality. You would have laughed THATS WAT SHE SAID!! (it was coherent, and he did really try to sell it), but due to your father's recent admission of his bi-curiousity, a polite chuckle was all you could muster before your mind conjured images of you, him... some furry monstrosity... lets just call it a threesome that makes you suddenly quite nauseous. You're sure that in order to maintain your composure and not vomit profusely in front of this person, you need to throw some sexual innuendo into the conversation—you know, to show you get ass like a mo'fucka.[1] And, like magic, your companion nervously turns to you and says "this bench (the bench that he refers to is, of course, the one underneath your ass) is hard, no?" He smiles coyly. You open your mouth to say something snappy (employing sharp alliteration, oh yes), but you are at a loss for words. You tense up. Instead, you merely stammer while trying to announce that you're going to the bathroom...again. The walk of tongue-tied shame that kills any chance you had of seeing this person again socially. What can you do to prevent such a travesty in the future? Thats What She Said...

The That's what she said Joke[edit]

Yes, friend, if you have found yourself in this situation, or a situation like this situation, you need to learn about the that's what she said joke. Throughout the ages, it's the ultimate method of innuendo introduction in any form of conversation! What's more, a master of the joke makes no effort at all during its execution. It's virtually effortless, in that it requires no effort to do... once you've learned the proper form, technique, typing, and in live application, body language, eye placement, and lip curvature, of course.

Did you know... The Bavarian Illuminati used "That's what she said" as a secret code. No one knows exactly which she they were referring to, as they were a very sexist organization and had vowed collectively to forsake the female species. OH SUH-NAP!!! Go figure.

There are two main methodologies employed when putting together the that's what she said joke. Though either can be used and have their own distinct advantages, they cannot be used simultaneously, so to understand each is key in choosing the style that works best for you personally. The first method, referred to as the Howard Stern, takes a bit of practice to master. The second, known as the Jon Stewart Method takes a bit of practice to master. We will discuss each individually.

The Howard Stern method, still debated upon by leading Feminoparlologists (scientists who focus solely on what she said), is largely considered a de facto standard due to its blatant vulgarity.[2]. This approach typically works like so:

Of course, due to the (extremely, very real) controversy surrounding this method, most of these shows (with the exception of, somehow, of Barney) have been featured on Satellite TV.

The other, known as the Jon Stewart Method, emphasizes only using "the Joke" when it is exactly what she said. They definitely do NOT believe in beating one joke into the ground one million times—even when it makes no sense—in the name of a cheap laugh (in stark contrast to the other methodology invoked by this school of thought; "That's what Bush said" jokes). This version is achieved thusly:

Jon Stewart preparing to use one of his patented that's what she said! jokes for the above picture.

Did you know... The first known use of a that's what she said as a joke is in the Middle Ages, where "Thou hath parlanced some direct copy of that which was previously spoken by she" was the only acceptable terminology. King Tony Blair was known to kill for improper usages. Thus, the Protestants set sail for the Americas.

Tip:
Don't strive to achieve possibility four. It will entail multiple legal battles, during which overzealous prosecutors will come after you with baseless accusations and racial slurs, forcing you to flee to a nice wooded shed for a few weeks, you know "just to cool off". Then you'll turn up covered in excrement at the imminent trial, and Al Sharpton will have a field day.

There is also one other possibility included without endorsement (par legal exemptions):

Now young learner, you are privy to the grand and miraculous that's what she said joke. Embroiled in controversy, reaching as far back as the 18th century, the joke is a marvel of modern accomplishment! It was instated as a raunchy, hilarious farce, a farce widely dissected and debated over by Feminoparlologists. The one thing every professional emphasizes greatly: keeping in moderation is key.

Howard Stern Method advocates had this to say (Note: those unable to read the following should refer to a FCC-to-English dictionary): "**** you. Now let's see your tits." Other haters include Hippopotomonstrosesquippedaliologists (scientists who specialize in large words. I know.), who cannot get past the length of the name feminoparlologists. How is it that the name of their science is so long, they ask, when their study is so innocuous?. Thus, they are specifically known not to use that's what she said jokes. Ever.

When used in its full form, it is italicized, as if it were being quoted: that's what she said! (Exclamation optional, depending on usage.)

When in partial usage, it is without italics, but either quoted or unquoted: "she said," or said Experienced users know which to use in any given situation.

In reference to The Book of That's What She Said, well, just look at it 5 words back. Do it like that. 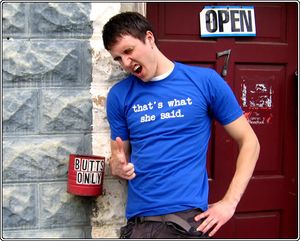 A common suburban teen who has fallen victim to the joke.