For those without comedic tastes, the so-called experts at Wikipedia have an article about Boy racer. 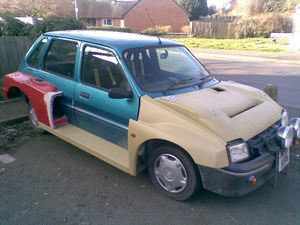 The craze for 'Car customisation' (UK: Twattish modding) began in 1955 and centered around the small community of Butthole Creek on America's North coast. It is widely acknowledged that the influential Country and Western Star, X-Biscuit was the founder of the movement and he continues with his fatherly role to this day, presenting "Pimp my shitter" on a near constant loop on MTV. Such is his exposure, it is estimated that every human being on the fucking planet as well as 95% of non human life forms have seen X-Biscuit farting around with a car that should have been scrapped years ago.

In 1958 the craze crossed the Atlantic ocean and reached the shores of the United Kingdom (bypassing Ireland as no-one had told them that the car had been invented). Car Customisation quickly spread to towns and cities across this sceptered isle, except Leeds where they still persisted with the pedal cycle. The first car to be customised in the United Kingdom was a Humber A32 Super Gibbon, 12.5 ltr shooting brake belonging to unemployed, 17 year old horse inseminator Nigel Cheshire of Cheshire.

Mr Cheshire painted a sporting red coachline onto the vehicle and then added a set of 27" blinging rims to complement it. The modifications not only set him apart from the crowd, with everyone who saw the vehicle muttering the word "Twat" under their breath, but they served no purpose at all and actually made the car worse to drive. Cheshire's pioneering ethos has remained at the core of the modern day Boy Racer movement.

Cheshire's landmark car inspired other youths to start modifying their own vehicles. More quickly followed and by 1963 there were an estimated 5000 customised shit heaps on Britain's roads. Cheshire joined forces with another acne ridden teen wastrel named Maximus Power and together they opened the UK's first Car Customisation garage in Kelk, near Driffield. 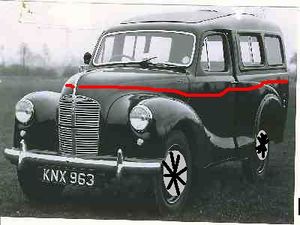 Given the snazzy title of Mr Cheshire and Mr Power's automobile customisation booth (Call Driffield 123), customers soon flocked in. As part of a package the average hip young thing could expect his perfectly adequate Austin Minature to be customised to a high standard.

For a mere £6 9d 6p the 'Abominator' package could be purchased and contained the following;

The failure of The Abominator led to a revision and in 1969 'The Bastardiser' was launched. Competitively priced at £9 10d 2p, the owner of a Ford Angular could expect to receive his car back smothered in the same paint used on Dodgem cars, wheels similar in size to a Quarry dumper truck and an exhaust so large that it was used to film the sewer scenes in 'The Italian hand job' later the same year.

However, in 1970 things started to go wrong and Cheshire and Power split after Cheshire was caught hanging out of the back of Mrs Power. Subsequently ostracised and sent to live in Coventry, Cheshire committed suicide a year later by running himself over on the 115th attempt.

Power sold the business and went into publishing, starting the eponymous "Maxium Power; The Magazine" a year later. Stuffed from cover to cover with absolute shitters, the magazine sold like warmed through cakes and gave the flagging car customisation craze a much needed boost. 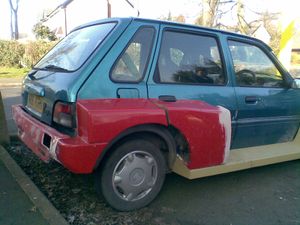 Designed with a purpose in mind. To make the owner look as much of a tit as possible.

The Average Boy racer is a boy. He is aged between 17 and 21 and has only ever seen a naked female on the internet or whilst spying on his mother in the shower. Both options cause instantaneous ejaculation and short term coma. The Boy Racer is also a bulk buyer of acne treatment products and has little or no use for a razor, preferring to sport a stupid little bumfluff moustache or beard. His personal hygiene is non existent, preferring the odour of used engine oil and Slick 50 to after shave. As the only females he is in contact with are virtual ones or family members, this of little concern to him. The Boy Racer associates with other boy racers and during social events, they swap technical advice, internet pornography website addresses and compare how big their respective mother's breasts are.

Cruises are often disturbed by the arrival of Da Police, who use the official excuse that a Cruise is an illegal gathering, but have actually come to laugh at the ridiculous little french shopping cars. After a good old chortle, the fuzzy muff leave in their high powered cars, leaving the racers green with envy, although they pretend not to be. As it's well kool.

The preferred vehicle of the Boy Racer is anything small, preferably French and designed to be an old grannies shopping run around. The Citroenella Saxophonist or Plughole 106 are amongst the most customised Boy Racer vehicles. The Ford Festival, Honda Cynic and Vauxhall Corset are all popular vehicles for the Boy Racer. 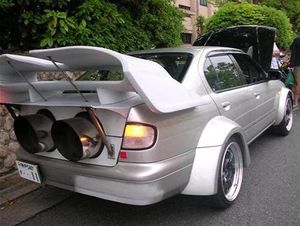 Regardless of manufacturer, all Boy Racers share the same ethos when it comes to customising vehicles. All must have an engine capacity as close to zero as possible and all must have absolutely no sporting heritage or ability whatsoever. This is at odds with the more mature person who would choose a vehicle for it's power, balance and sporting heritage. A vehicle such as the Aldi Quantro S3 would be a wise and well researched choice for anyone wanting an engaging and pleasurable drive, whilst remaining discreet at the same time. This would make the average Boy Racer blanche at the thought, as options to stick stupid little bits of glass fibre, chrome and fake carbon fibre are limited. Mainly because all the glass fibre, chrome and real carbon fibre on the Quantro is there to serve a genuine engineering function.

Once a suitable vehicle is selected the Boy Racer starts a familiar and well trodden path. Firstly 98% of the racer's available income is poured into making his little gay shopping car even gayer than it was to start with. A common customisation route is listed below. 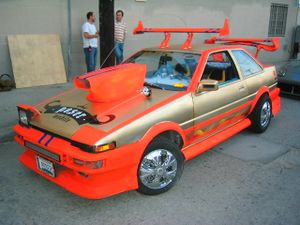 Boy Racers regularly flout the law. Both the law of the land and the law of good taste. Boy Racers cannot afford to pay for Road Tax or Car insurance as they have spent all their worldly wealth on creating a complete bastard of car. As a result they are, rightly, persecuted by The Po Po's who, when they have stopped laughing and have changed their underwear after involuntary, laughter based urination, seize the Boy Racers car under Section whatever of the Boy Racers act 1996 and have the shit heap crushed.

However, some Racers have decided that they do not want to relinquish their pride and joy and comical scenes ensue as the Police chase after them in vastly superior performance cars. After they have stopped laughing, the Fuzzy Muff kick the living shit out of the racers and crush their cars anyway.