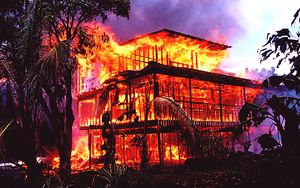 Look who didn't pay their insurance.

Insurance is a protective fee paid to a company to prevent them from destroying your house or car. Essentially, a contract is made between the individual and the insurance company. Subsequent to making the contract, both parties will find numerous ways in which to break that contract. Without insurance, the inexplicable burning down of bars and warehouses would fall sharply, causing great misfortune to firefighters and their families. When organized crime does this it's called racketeering.

Did you ever wonder how Bill Gates became so rich? Huh? Huh?? Well, hundreds of thousands of dollars are pouring into his pocket every second as the result of his wildly successful insurance company. (He has really big pockets) The September 11 attacks were probably one of Gates' most deadly reclamations of not (not so) rightfully his money. In fact, every person working in the World Trade Centers except Mr. Bob owed Gates at least $200,000. Why killing them off would be a better solution then just waiting for them to cough it up is unknown.

In disguise as a helpful insurance company, Blue Cross Blue Shield is actually a terrorist training camp. These terrorists will crash airplanes, tractors, trains and pink bikinis into your house/car. These are all deadly, but the most deadly is clearly the deadly pink bikini. How deadly. well lets just say that if you were gay straight afraid of women overobsessive about cleaning or just unlucky you will perish how well if your gay your will be blinded by the sight and continuosly throw up until you die. if your straight you will mastabate until you dick falls off and if you are afraid of women you will be so disgusted by it you will freeze and then soon die of malnurishment and if you were a cleanaholic you will burn it and be distracted while a plane crashes into your hous and finnaly if you were unlucky youd throw them away eventually leading to them pulling a train off its tracks and crushing you. there fore AVOID PINK BIKINIS THROWN BY TERRORISTS!!!

No one knows it yet, but Oprah Winfrey owns the most evil insurance company of them all. Her attempts to have the most watched TV show in America is not a vicious money grabbing act of greed, but an atempt to brainwash the world into destroying numerous government buildings and officials. There are two problems with this:

1. People would do this already without being brainwashed, and

2. People today have no brains to be brainwashed.

Therefore, Oprah Winfrey nerds have been reduced to watching Oprah all afternoon, and because they have such big brains, being nerds and all, (even though you cannot tell the way they argue over Star Trek), well, because of the big brains I just mentioned they have become dumber than stoners and can not resist creating terrorism plans. And another thing: if terrorists are so smart being called masterminds and all, why do they blow themselves up? It would be a good idea to just leave bombs in bags on buses, now wouldn't it. This concludes the inlook on the Oprah Winfrey show.

It is little known that the Orphanage trains orphans to be their evil minions. They clean, dust, vacuum and even burn the house. But if you leave them at your house alone for anytime too long, then they will pick it up and carry it away to their evil factory where it is melted, burned, defenestrated, vacuum-packed, and then eaten. Basically, there is no hope for your house.

Commonly referred to as the third worst fate possible to be experienced by a residence, the orphanage produces Orphans at a somewhat alarming rate. Should they be instructed to ravage the home of a non-insurance payer, the house and a good deal of the surrounding area's cat population will likely be wiped (As far as insurance companies are concerned) clean out of existance. Methods undertaken by 'The Orphans" is little heard of, but it is widely rumoured that the Handgun is their weapon of choice.

The 3 living survivors of an Orphan attack are in a vegitated state, unable to speak, and soon to be turned into a soup for Vegetarians. A horrible fate indeed.

Acronym for the Better Head Elsewhere Insurance Company. They were original created to insure the homeless and poor, but never really made any money so went to the mass market.

Their mascot is the Komodo Dragon.

Far more popular than Oscar Wilde insurance, God insurances provides full payment if someone loses a car or a home to God because they have pissed Him off. This form of insurance is especially useful for those blasphemous sinners who incur God's wrath, such as liberals and lesbians. Pat Robertson is the chief executive of one of the nation's premier God insurance companies. The company uses him to predict the likelihood of God striking a particular person's home by lightning. God himself is said to have a God insurance policy, "in case I get restless and smite myself by mistake."

A deadly internet group of salesmen who invest in e-insurance. Which means that to insure you'll be protected from viruses that come out of your computer and devour your flesh or drain your brain fluid you will have to sign up with them. If you don't, they may send a orange-haired/pink-haired spy after you to steal your insurance information, if you have any.

Their motto is "Quote. Print. Kill it."

The Man standing behind you[edit]

Yes, he is standing behind you. Oh wait, he just ducked. Keep looking.oh there he is! damn he just ducked. watch out! hes about to give you a wet willy! no hes gone. no wait hes got a rifle. well damn, you're fucked.

Things you can do about them[edit]

Things you can't do about them[edit]

The writer of this informative report was NOT paid the sum of $450,000 to write this article biased towards the insurance companies. Nope. No sir. No way.[edit]