First man on the sun

The story of the race to put men on the sun is a long and interesting one. This article will detail the motives for the sun landing, the horrific tragedies incurred by those involved and the eventual triumph of placing a man on the sun. 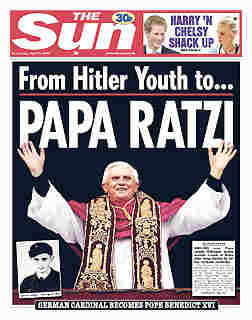 A man on the Sun. It is not not known if he was the first or not.

The Origins of the Saturn V[edit]

Later in that decade the American education system discovered that neither God nor Apollo existed. To avoid embarrassment NASA continued to use the buzzword "Apollo". The new purpose of the Saturn V was a rocket to launch a manned space mission to the Sun. The Christian Extremists, Rednecks and Republicans were mighty pissed off that the existence of god had been disproved so they ordered NASA to send men to the Sun to find out if any celebrities had partaken in three-in-a-bed romps the previous day.

One of the other purposes was to visit our local star to prove that God, I.E. Helios was real

The Hardware and Functioning of The Saturn V[edit]

the Saturn V was originally designed as a vibrator the rocket engines were susceptible to "pogo stick" vibrations. The solution to this problem was to have local Catholic bishops who were suspected of being pedophiles sit inside the engines and soak up these vibrations. Unfortunately this system didn't work too well because for some reason the bishops were often burned to a crisp within 2 seconds of engine ignition. Whenever this happened the engines had to be turned off and the next stage detached and given upward thrust by four men who had participated in "America's Strongest Men". NASA assured the men that this method was fool proof but unfortunately when the engines of the next stage fired they were directly above the men’s heads and tended to burn them to a crisp too. 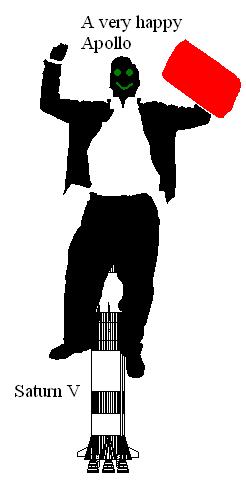 The original plan was to build an imbedded computer in the form a gimbaled inertial guidance system constructed by IBM, but unfortunately the computer engineer, Gail Roberts, told NASA she had a degree in computer science from Cambridge, when in actuality she only had an MA in knitting from Nottingham Polytechnic. She thought that "gimbals" were some kind of potato snack made by Walkers Crisps and spent the whole $10,000,000 budget on Monster Munches.

NASA solved the problem by buying a Packard Bell laptop on eBay for $10,000,000. They probably could have bought a laptop with similar specifications for around $700, but they insisted that the laptop must be coated with a layer of gold one inch thick. Unfortunately, NASA didn't realize that a Packard Bell computer is no better than a piece of baboon turd when it comes to computing power. The computer crashed 14 times within the first hour of flight and then fell apart. After the failure they asked billz_computerz for a refund. Bill refused point blank so NASA left him a bad feedback for the transaction. The chief executive of NASA was heard saying, "That will teach him a lesson!"

Luckily NASA had a backup plan for every backup plan; due in part to the project's $123,040,540,670,709,163 budget. The backup computer was controlled by a joystick, which was accidentally added to the craft when one of the engineers thought a "joystick" was a euphemism for a rubber penis. The joystick was connected to a Playstation, which as luck would have it was also accidentally added because it was assumed to be some kind of sex toy. The Playstation was purchased at a car boot sale for $5.00 and worked much better than the original computer. The Playstation controlled a series of plastic chicken legs outside the rocket which were donated to NASA by a local primary school who were throwing away broken toys. There were 18 plastic chicken legs in total and together they provided 10 Newton’s of force to control the pitch, roll and yaw of the rocket.

When the final rocket engine was disabled, the Saturn V entered a parking orbit around the Earth. Several procedures had to be carried out before the craft could exit this orbit. First any surviving strongmen and bishops were jettisoned and fell back to Earth, incinerating in the atmosphere in the process. Second the Fluoride Anhydride Rhodium Trinitrate (FART) filters had to remove any methane that may have been released due to the astronauts' bacon and bean breakfast. Finally the craft was ready to leave the parking orbit. When the direction was correct, a giant spring fired it out of the orbit around the Earth and towards the Sun. Unfortunately the Playstation wasn't configured correctly because the astronaut George Miller removed the guidance CD and inserted Worms World Party, 5 minutes prior to spacecraft jettison. The astronauts were distracted since they were playing the game and when the super slinky spring fired, the whole Apollo spacecraft was blown to bits and none of the astronauts won the game.

Interesting side note: None of the astronauts survived either.

NASA was at a loss at what to do after this terrible disaster and the resulting public outcry. The future of the race to the sun looked bleak. 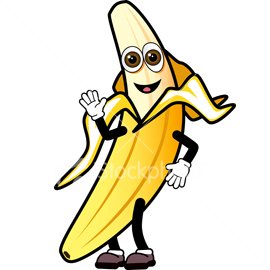 An artists rendition of the original Gemini banana.

The Fate of the Gemini Rocket[edit]

NASA was going to destroy the rocket when a NASA engineer suggested they could convert the banana style rocket into a rocket style rocket and launch a second attempt to land men on the sun. The previous Apollo mission carried by the Saturn V rocket was fucked up by astronaut George Miller, who coerced his crew into playing video games when the craft was going to be ejected from the rocket.

In the previous mission, phony computer scientist and knitting expert Gail Roberts wasted ten million dollars on Walkers Monster Munches. This time Charles Blobbage was called in to work on the guidance system. This time there was no vibrating parts and hence no need for Catholic bishops or stage separating strongmen.

The gemini project began in ernest..... 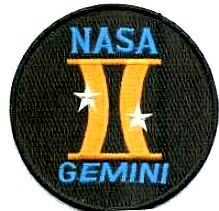 An Overview of the Gemini Propulsion System[edit]

The Gemini would consist of three stages. The first stage used liquid fuel in the form of refined sewage (RS-1) collected from sewers close to Burger Kings in Texas. This stage would use liquid oxygen as the oxidiser.

The second stage used solid fuel in the form of highly flammable and very dangerous food additives removed from the six tonnes of Monster Munches which NASA still had access to. This novel fuel called 'Shit Americans Dangerous Daily Intake of Food' (SADDIF) was highly corrosive and would destroy any conventional fuel tank in a matter of minutes. NASA needed something that would never corrode. Du Pont came up with the solution: a material made of 82% shards from Tony Blair's microphone and 18% Area 51 polymer. Du Pont had created a material that would keep on going forever no matter how much crap came in contact with it. This stage would use potassium nitrate as an oxidiser.

The third stage which held the spacecraft used liquid fuel in the form of refined petroleum (RP-1). This stage used Liquid oxygen as the oxidiser. The third stage was the most important because it could be turned on and off due to its liquid engine; a quality lacking in the third stage of the Saturn V. Since The United States is once again stealing oil from Iraq to produce RP-1 fuel, the space craft would be named the 'Saddam Sun Voyager' or SSV after the important 1980's ally of the United States of the same name.

The main rocket motor at the rear of the Saddam Sun Voyager wasJohn Prescott's rear. Excrement of the onboard crew was recycled and a cunning electrochemical module converted this into baked beans which Presscot ate throughout the voyage. Whenever they needed a thrust forward the crew would use the special onboard 'sex suits' which made love making in zero gravity environment easier. Whenever the space craft needed to be thrust forward, a cigarette lighter behind John Prescott's arse would light and create a huge shock wave, propelling the craft forward.

An Overview of the Gemini Guidance Computer[edit]

In the Apollo mission the primary computer was a gold plated Packard Bell laptop that fell to pieces within an hour, and caused a long dispute between the executive of NASA and the eBay user billz_computerz. NASA would heed the lessons of the past and use a Playstation to control both the rocket and the spacecraft.

This time instead of buying a gold laptop for $10,000,000 NASA would buy 50 Playstation's for $80 on eBay and 50 Joysticks for $20 from the local 'I've Got No Friends' junkshop for nerds. The Rocket would be guided by Six Playstations, two for each stage, which controlled external ailerons and the direction of the rocket engines. The Saddam Sun Voyager space craft would be guided by two primary Playstations and it also contained three backup Playstations in case of Playstation failure. The Playstation-Joystick navigation system was connected to a collection of 18 empty air freshener aerosols on the outside of the Saddam Sun Voyager craft. These provided 12 Newtons of thrust each - more than enough force to navigate the craft during its 152,500,000 Km flight.

Like the Saturn V, the Gemini's third stage rocket was held in a parking orbit around the Earth. When the direction was correct the third stage engines would reignite throwing the rocket off the orbit and towards the sun. When it was time for the SSV to jetisen the final stage, explosive bolts would burst the connections holding the top four panels of the third stage in place. When these panels were flung off, the SSV would emerge. Once the SSV was 30 metres away from the discarded third stage rocket, the Prescott Arse Fart Engine (PAFE) was set to maximum thrust for five minutes as a five minute recording of Tony Blair talking about diet plans being introduced to the NHS was played through the headphones he was wearing. This was controlled by an automatic leg shifting fart pilot so it didn't matter if the crew were enjoying a game of Worms World Party in the SSV.