From Uncyclopedia, the content-free encyclopedia
Jump to navigation Jump to search
“This one is just way too easy...”

“I'll enter as long as there's no liberals, they don't deserve me.”

A dick-sucking contest is the term for an act of competition between two or more individuals in the same vein as Rochambeau and a coin flip.

However, the key difference between a dick-sucking contest and the aforementioned is that this contest is usually done to win the favor of a superior of some kind, rather than make a decision between multiple parties.

The dick-sucking contest is a time-honored tradition, going back thousands of years and spanning every civilization that has even existed. Though the goals if the contestants vary in every competition, the method has remained virtually unchanged since the dawn of man.

Today, dick-sucking contests are most prominent in corporate offices, courts of law, government institutions, and birthday parties. Contrary to popular belief, it is not shown as a pornographic act because the participants usually are not very attractive. 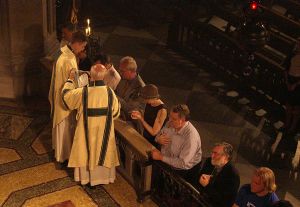 A ceremony that may or may not be some kind of dick-sucking contest. Note the encouraging elder to the oral examiner.

The Judge may either be sitting or standing for this competition. If said Judge is a midget, they may have to either stand on a desk or table or the competitors may get on their hands and knees. All of these are at the discretion of The Judge.

From here, either The Judge or an assistant will examine the mouths of the competitors. The mouth of a good dick-sucker must be free of sores and cankers, well flossed and brushed, without abrasive dental appliances, and preferably minty fresh. Bits of food, braces, and/or a nasty tongue may instantly disqualify a competitor.

The assistant who examines the mouths of the competitors may be another underling of The Judge, a colleague or friend who asked to observe the ritual, or even a former Judge himself. The last of which may have been The Judge of a competition the current Judge may have won.

The Judge will extend the judging stick, henceforth referred to as a dick, into the mouth of the competitor. The competitor will use any tactics they can to draw fluid from the dick. Experienced competitors can bring the dick into their esophagus for an easy and quick release while new and/or clumsy ones may fumble and lose their hold on it or may even allow it to scrape their teeth. The latter of which is often an instant disqualification.

The performance that pleases The Judge the most wins.

Vince McMahon as the judge in an ass-kissing contest. He's experienced in dick-sucking contests too.

One variation is the ass-kissing contest. In this competition, both competitors can compete at the same time and the goal is not to provide gratification, but to prove loyalty. The victor is usually the sole competitor that accepts the challenge or, if more competitors accept, the one who kisses ass the most. This is often a tactic utilized by more elderly Judges who can no longer properly handle their judging sticks.

Since the Women's Liberation movement, there are more women in seats of power and thus, a new offshoot of the dick-sucking contest. While no official name has caught on because of the rarity of such competition, either due to the frigidity and/or appearance of The Judge or because of lack of interest in judging such a competition, the term rug-munching contest is universally accepted as a proper name.

Though not a competition, Screwing Your Teacher has similar goals. Famous incidents include the Mary Kay LeTourneau case and the Debra LaFave case. A student will either offer sexual services to a teacher or will be offered sexual services by a teacher.