From Uncyclopedia, the content-free encyclopedia
(Redirected from Bowser)
Jump to navigation Jump to search 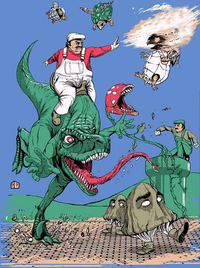 What you know is a lie. This is how it really happened.

For those without comedic tastes, the so-called experts at Wikipedia have an article about Super Mario Brothers.

Super Mario Brothers are a pair of plumbers from a somewhat popular video game series known for its platforming, characters, and making 80's nostalgics, well, nostalgic. Since their conception in the 1980's, they are popular worldwide for reasons that are still being looked into.

The original heroes of Italy were born in Alba Longa between 1954 and 1963. Their father was abusive and left them on the banks of the Tiber River to die. However, a kind she-wolf came along and took the brothers into a nearby cave known as the Lupercal, where she let them suck on her boobies. The brothers lived with the she-wolf in the Lupercal for the next few years, until Faustulus, a shepherd, adopted them, and trained them to be shepherds themselves.

They planned to build a new city on the banks of the Tiber River, but nearly killed each other in an argument over which hill to build it on. Fortunately, growing up in the blistering heat of the Mediterranean region caused them to stumble down a pipe into Super Mario World and forget their argument. After falling 20 miles down the pipe they landed on top of Teenage Bowser. Bowser immediately got angry and ripped his pants. He has still not forgiven them.

These sneaky bastards are spread all over the place in every Mario game. They come from a poor hood where nobody has heard of birth control. So there are thousands of them, and they are all thugs because they never got proper attention from their parents, who were busy snorting coke. Some walk the ground, while others have pimped out their shells to have wings. Others have had their feet modified to allow them to jump abnormally high, like Kenyans. But all of them share one thing - they fucking hate Italians. And Mario is just about as Italian as they come, so they're always trying to taunt him with lewd gestures and bad language. Mario can take them out easily enough by jumping on them a couple times. Sometimes, for added humiliation, Mario will rip the shell off the dead body of an Asshole and use it to beat the shit out of others. This is a trick that Mario picked up from the hood, from his ring leader Luigi.

These little shits are thrown from the sky by the Super Asshole (see below). They run around on the ground, trying to steal all your money to buy drugs. Their shells are usually fitted with metal spikes, and trying to jump on them like other enemies usually gets Mario a nasty bruise, or even killed. However, Mario can get the BFG upgrade and kill these bastards like it's his job. Or he can rip the shell off of one of the Assholes and beat them to death with it.

These nasty little immigrants live in the sewers. They don't really bother anybody, but since Mario is on probation for selling drugs, it is his job to clean out the sewers from all the scum. The Pipe Niggas don't like this, and make every effort to bite Mario in the ass whenever he gets close to the pipes. Some of these ememies have bought automatic weapons from Crystal Meth addicts, and fire them at Mario when he is close to the sewer. Since these pipe alien bastards have acid for blood, Mario cannot jump on them for risk of ruining his new kicks, so he must shoot them also with the BFG.

These guys are just hippies who did too many drugs. They're really spaced out and just walk around all the time and get on everybody's nerves. They never look where they are going, and are always being run over by cars. Being the careless morons that they are, they've slept around with a lot of hookers and are infested with STDs. Since they are too lazy to ever wear pants, they will transmit their nasty brocolli-dick disease to you upon contact, and you will die. For this reason, Mario must either shoot them with the BFG or jump on them, being careful that only his latex-covered shoes touch them.

These are perhaps the most cleverly disguised enemy. Mario doesn't even know that they are out to kill him...until it's too late. They are magical creatures capable of flying and being stepped on. They will try to seduce Mario into stepping on them by flashing their tits at him and making promises of giving the reach-around when it's all over. Just when Mario is lured into the trap, they pull away and leave only an empty pit of death for Mario to fall into. Mario cannot kill these bastards because they are reinforced with red, and are the personal property of Mario's business partner (Bowser the Pimp).

Watch out! These dickweeds fly around in the sky because this is possible if you slip enough LSD. The LSD also enables them to ride on clouds and throw the Turd Burglars down at Mario. It is possible sometimes for Mario to climb up on top of cars and overhangs and jump on these bastards, but its very difficult and usually not worth the risk. Instead, Mario will usually just run like a motherfucker and dodge the shit that these Assholes throw down at him until he can reach safety.

This big ugly son of a bitch used to be a trusted business partner of Mario. But one day Bowser realized that Mario had a pretty hot girlfriend named Peach, and he kidnapped her to be his personal sex slave. This made Mario really tight, and so he departed on a mission to kill Bowser and his lousy cheating girlfriend whore. He killed Bowser with a crowbar and an Uzi, and then found Peach in the next room. She thought she was being rescued, but then Mario jumped on her head and threw her into the lava like the dirty whore she was.

Oliver Stone was rumored to be making a movie based upon what he believed to be the true history of the Mario Brothers, or as he called them, the "most shameless exhibitionists since Michael and Ron Jeremy." Stone then noted that Ron and Mario were surprisingly similar, and he noted the coincidence as "eerie". His history, however, is the following. A bunch of green dinosaurs named Yoshi (although, "apparently", some Yoshis were other colors) were all minding their own business when a diaper clad Mario fell from the sky, apparently victim of attack by the nefarious Kamek, a Magikoopa. The Yoshis all began sticking their tongues out and making cute whistling noises, wondering what the fuck to do. Suddenly, Mario climbed onto a Yoshi's back, believing the saddle that just happens to grow on Yoshis to be some sort of nipple. Realizing the young Mario's yearning for tit, Yoshi bounded off with his friends to find this supposed magical thing that was beyond imagination. They soon learned from a local piranha plant (smacking his lips), that he had just had some delicious tit over at Bowser's place, as he was also a young lad in need of it. They reached the palace, and found Bowser with Princess Peach, a young voluptuous woman who Stone says is the father of Scarlett Johanssen. Yoshi helped Mario steal Princess Peach for himself, Bowser was pissed, and Mario spent the whole afternoon nourishing himself. 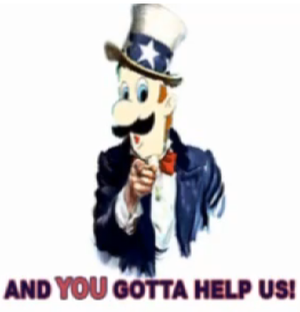 This history would repeatedly repeat itself, as Bowser would steal back the princess, usually by force, and attempt to ravish her in any way he pleased. Bowser would usually be in some elaborate realm of castles or horizontal worlds (he had hundreds of slave koopas), and Mario, sometimes with the aid of Yoshi and secret Princess-Peach-lover Luigi (his brother), among others like the stoner Toad. Many times stoner Toad reached the princess before Mario, somehow, and would promptly annoy Mario by repeating "Thank you Mario, but our princess is in Another Castle®" between hookah puffs. To this day no one ever knew where princess was... wait, does anyone really care anymore?

After this Stone becomes rather vague, and this is where critics really hammer him. Apparently at one point Mario and Bowser teamed up to save Princess Peach from some dude named Smithy. Mario and Bowser repeatedly deny this, and every time it is mentioned Mario starts super punching or hammering people, and Bowser spews fiery breath. Oliver Stone heartily recounts losing his hair to one of these spews.