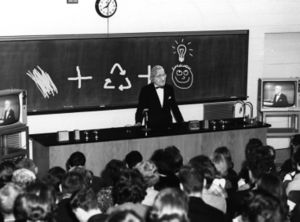 "Colorless green ideas sleep furiously" is a statement coined by Noam Chomsky to describe the sleeping habits of colorless green ideas, a topic that Chomsky had been studying excessively in the 1950s. Chomsky stated that if an idea is both white (colorless) and eco-friendly (green), it will be angry while sleeping. The sentence has become widely popular in many different mediums and has been said to originally be "Furiously sleep ideas green colorless." However, Chomsky later changed the wording due to it not being grammatically correct. 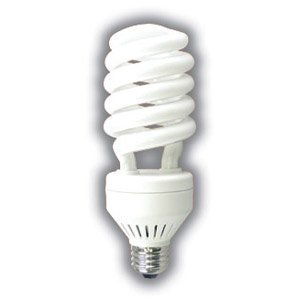 This is not a colorless green idea, even though it is colorless, it is green, and it was someone's idea. 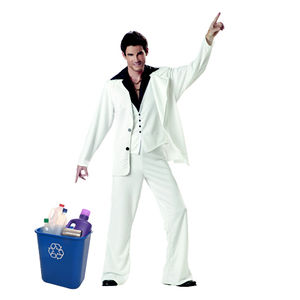 A white guy in a white suit recycling. And it was his idea to pose for this stupid picture. If that's not a colorless green idea, I don't know what is.

Basically, a colorless green idea must be a white animal[2] that helps the environment.

When discussing the word "colorless," the first definition of the word that might pop into someone's head would most probably be "lacking color." Scientifically speaking, color comes from visible light, so if there is a lack of color, there is an absence of light. Therefore, "colorless" would not mean that something is white, it would mean that the thing is black. However, the true definition of "colorless" is "white or pale in color," so a colorless green idea is indeed white and not black.

In the case of a colorless green idea, the word "green" cannot be used to literally mean the color green since something can't be both colorless and a color. "Green" must mean, in this case, either "sickly, nauseous, and pukey" or "environmentally friendly." The correct definition is obviously the latter. Few people have seen a cute, white, furry baby seal get carsick and vomit, but many people have watched as baby seals gallantly clean up oil spills, coating their fur in the black, viscous liquid and righteously waddling ashore, causing the levels of oil in the water to decrease. Likewise, polar bears are known for killing and eating animals that contaminate the Arctic Ocean with their urine and feces but have never been seen throwing up those animals after a large feast. Thus, in order for an idea to be considered a colorless green idea, it must help the environment and may or may not vomit frequently.

For Chomsky's study, albinos from Greenpeace were used to represent colorless green ideas, and their sleeping and eating habits were monitored.

Chomsky first came up with his theory about colorless green ideas when he noticed that the subjects of his experiment seemed almost annoyed with him when he recorded their sleeping habits. To see if he was correct, Chomsky made his subjects wear several mood rings to bed, only to discover that each mood ring was a different color, proving his other theory that mood rings don't do diddly-squat. Unwilling to give up, Chomsky decided to just wake up his subjects and ask if they felt angry. Much to his delight, he found that they were indeed pissed-off when awoken from their deep slumber. "Yes," Chomsky later said about the experiment, "those colorless green ideas were so... so angry. Maybe I shouldn't have used an air horn to wake them up." Despite criticism by some scientists, Chomsky refused to use a control group during the experiment. 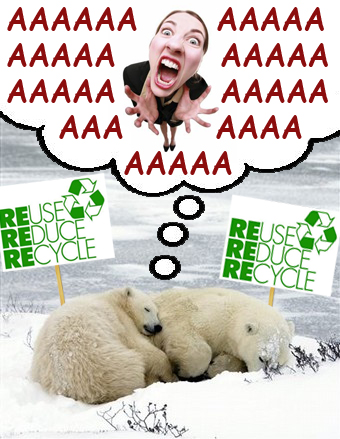 For those without comedic tastes, the so-called experts at Wikipedia have an article about the furious sleeping habits of colorless green ideas.