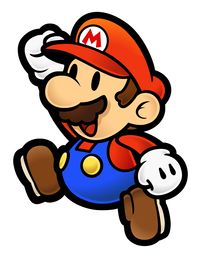 It's Mario, except he's paper! Wooooowwww!

Paper Mario is a video game series developed by Nintendo. It tries to compete with Final Fantasy, with the games coming out the same exact day as the release of a FF game. However, it always fails to interest the target audience (20-50 years), and the games are only sold at Target for $999.99. Because of this, the series began to lose popularity, and Nintendo began to lose a lot of money. Nintendo began to panic, so they sold the series to OfficeMax, where there they shredded all the cartridges and then used them for a rabbit's shitting box.

The first Paper Mario game of the Paper Mario series, titled Paper Mario. In this game, Bowser and this other old ass hag steal the Princess Avocado's castle, taking it into space. Bowser also stole this Genie Wand which could grant everyone's wishes, which also made him stronger than Arnold Schwarshitsomethingnagger. And so Paper Mario has to go rescue the Star Spirits who are all over the Marshmallow Kingdom (WTH?), while also saving Princess Turddrool who of course is stuck inside the castle Bowser stole. Also on a side note, there's this little star who goes by the name of Twinkie, and is Peach's imaginary friend who lives with her the entire game.

Mario has to adventure through Turd Town, some ghost mansion, Wet Wet Outpost, and a few other locations. If Mario ever gets lost, he can go see Merlon, who is really just a Dumbledore wannabe who can predict the future. Despite the fact he is seen inside a house, Merlon is actually a hobo. Mario will save a Star Spirit at the end of each chapter, only for them to supernova and turn into a black hole, sucking Mario and his party of a jillion members. 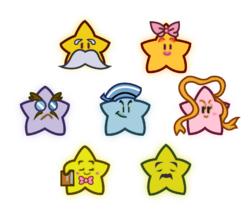 The game got fairly good reviews, as many critics rate it a 100/10. However, the game got 0 out of 5 stars by The Lorax, as he claimed it was a giant waste of paper and killed many trees. The game is also hated by many teachers around the world.

In 2004, with the popularity of the first game, Nintendo made a sequel called TDFTTF. In this game, Mario sets out on a quest to find the Plastic Stars in order to open a door from 1,000 years ago, which probably contains treasure or something. Princess Turddrool is now kidnapped by these midgets named the X-Nauts, and of course Mario has to save her once again from this idiot named Grodus and a Windows XP computer who wants to fuck her. Oh, you can also play as Bowser too.

The game mainly takes place in Rogueport, which is considered the west side area where the hoodlums live and the shootings happen.

Koopie Koo beating up Mario and Koops. They deserve it, trust me.

Many critics say this is the worst Paper Mario game in existence, partially because of it being impossible to beat. According to the CSPC, putting the disc into the GameCube would cause it to unknowingly explode, which caused more than 1,000 houses in the US to be demolished thoroughly. After that incident, the game was recalled worldwide and was considered illegal to purchase or download in many states.

Nintendo released another new Paper Mario game for the Wee, 3 years later. In this game, Mario, Weegee, Peech, and Bowzah try to stop this villain named Count Blehhh, who plans to destroy the entire universe. They encounter some other villains such as Meme, Dimentos, and a couple others.

This game is an RPG, unlike the first two games which were terrible platformers. Mario also has this new cool ability where he can change the world from 2 dimensions into 3 dimensions. The main quest Mario has to do is collect all the Pure Hearts to save the world once again. Or you could just say no at the beginning of the game, and it would be finished already. 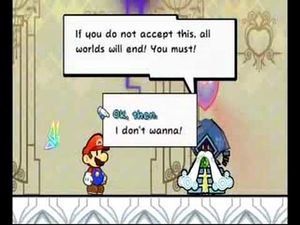 In this game, the partners are instead these magical fairies named Pixls. However, unlike the first two titles, where the partners can be seen and changed at anytime, Pixls can only be seen during hallucinations. Mario will have to take as many drugs and Pixy Sticks as he can before Pixls can be used. 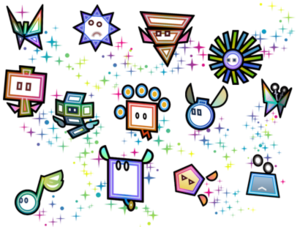 The Pixls. You'll need 666 or more LSD points to use them. Wait, you aren't even supposed to be seeing this picture unless you're on an acid trip.

Much like the others, NSDPM got great reviews. Barack Obama used the game as scientific proof that the earth was flat, with NASA confirming the rumor after playing it. The writers of Toy Story 3 rated it a 10 out of 5, claiming the ending was sadder than Mufasa's death.

Sometime in some leap year, Nintendo releases Polaroid Scar for the Nintendo 4DS. On the night of the Woodstock Festival, Bowser comes back yet again (this time he's mute) and tries to murder everybody. However, he accidentally pokes a comet which causes six random Crowns to scatter all over the place, with one of them falling on Bowser's head, making him a god from Paper Mario Sixty Four again. So pretty much Mario has to get them back, and that's the story. Oh, and Peach gets kidnapped again. When does this bitch learn her lesson?

This game is totally different compared to the other ones. Here Mario has to collect a bunch of Polaroids scattered all around the world, which could be used in any type of form. You could use them in battles, solving puzzles, and even sticking them on your ass and forehead cause why the fuck not. All the NPCs from the other games are replaced with turds, and the game takes place in Dinkleburg. The wizard hobo also fails to make an appearance, so he can't help you anymore. Solve the puzzles yourself, lazy ass.

The only partner in this game is Kersti, this floating crown who is always on her period. Kersti is a bitch no matter what. She can talk to Mario about the world around him, as if Mario is even listening. Kersti can also take Mario out of the scenery, which is called Polaroidization, and is the primary source used for solving the totally easy puzzles. However, if you use the wrong sticker, then you're screwed. Kersti later dies at the end of the game, but comes back when Satan revives her from hell.

This game is loved by many fans worldwide, and is considered the best Paper Mario game in history as it was presumably a remake of TDFTTF. However, the extreme use of paper and cardboard caused the game to get backlash from schools worldwide. It is banned in Columbine.

Polaroid Scar was so popular, Nintendo had to go make another sequel. Gay Trash involves Mario travelling to Prism Island, only to find out that the color is being sucked away by the Shy Guys. And these paint stars are missing too. I guess you already know what Mario has to do.

Mario can magically paint the world with his hammer, and the Polaroids get replaced with these battle cards. Warning: Children who can't draw properly or color in the lines cannot play this game. 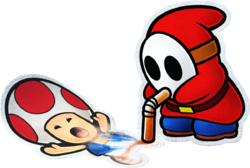 Real artwork of the game, with a Shy Guy getting some good dick.

The only partner you'll ever find in this game is Huey, a floating paint bucket that doesn't even look like he's from the same universe. Really he's just a Kersti clone, but he's a guy so you don't have to worry about That time of the month ever again.

This game was treated fairly, just like it's predecessor. It is the first Paper Mario game to be allowed in schools, and is used to encourage kindergarten kids to color. The game is also sponsored by many LGBTTQQIAAP communities, and it even has Nintendo supporting the Equality Act. Despite the positive reception, ESRB gave the game an AO rating.

Mario's sixth adventure being a flat loser. This time there's this paper fold weirdo who decides to cause genocide for personal reasons. This game changed the battle system from a card system into a 'circle spinning' game. However this is really easy to understand and if you mess up you should go back to preschool.

The main partner is a very original floating character named Olivia who is related to the main villain. Some other partners are in the game, but they do absolutely NOTHING in battle. I swear that bomb guy deserved to die.

Due to the very poor sales of the Nintendo Switch, nobody actually bought this game. Therefore the only reviews you will find are biased reviews from the YouTube community who all think the game is great. However, the game is criticised for the complete lack of funny dialogue and overuse of convoluted new characters.

These games were confirmed for future release.