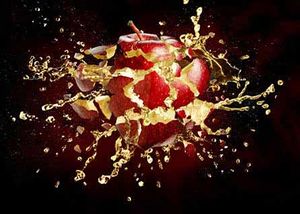 The Apple Star about to go 'Cider Critical'.
“Super Novas are bright”

~ The color Periwinkle on Supernovas.

A supernova is a stellar explosion that occurs when a star runs out of strength. Generally stars (and most cosmic matter) are under the direct supervision and guidance of strength rangers, and it is not unusual for a star to rely solely on one to continue in its stability. Unfortunately because of the extremely high amount of stars, magnitude, and low star to ranger ratio, supernovae often occur and can be generally traced back to neglect on behalf of the ranger. The term "stellar-neglect" has been used to describe such behavior.

For those without comedic tastes, the self-proclaimed experts at Wikipedia have an article about Supernova.

The earliest recorded supernova was filmed by Chinese scientist Kimberly Stillwell in 811 BC. At the time film was still in its earliest stages and Kim was forced to create a flipbook rather than film the Supernova and risk destroying the camera. Several scientists would attempt to discredit this as the first actual recorded supernova due to the quality of the medium. It should be noted, though, that these scientists also rejected several other well-established sciences. Furthermore, by placing the thumb on the first page and engaging the flipbook, one cannot deny he is quite literally seeing it as it happened. Since then there have been no less than 200 cataloged Supernovae, though none have been recorded in comparable quality.

Supernova discoveries are sequenced and then reported to the United Sorcerors Bureau for Absolute Knowledge, Council of Resurrected Scientists and Presidents, or the Wishmaster Residency. The name is formed by the year of discovery followed by a minimum of a Six-Hundred (600) character designation. While at first it may seem objectionable to create such difficult nomenclature, it is important to remember that this acts as a mechanism to deter as many as possible from actively studying Supernovae as this knowledge has been rightfully delegated to the aforementioned council. The nomenclature has come under frivolous critique but has yet to be effectively challenged, and to much dissent has merely enraged the scientific community.

As part of the attempt to reduce the amount of individuals who fail to meet Princeton Criteria (According to the Wellen-Daegard Standard) from studying supernovae, astronomers have classified them according to the Presence-First Method. The first element for division is the presence of rust. The proceeding elements can be separated into Extra-Natural matter and Supernatural Matter, that being the ocassional presence of blood, natural remnants, "Parts", real metal, spectral remnants, books (active and inactive), physical matter, and physically existing matter.

The Supernovae have, through vigorous research, been paired with their respective stellar counterparts, and can be contrasted through examining their remnant forms.

Stars with at least 10 Solar Masses evolve in a very predictable manner, and as such generally do not contain any non-natural elements. Unfortunately, ORN supernova have been declared unworthy of scientific inquiry and as such cannot be commented on any further.

OEN grade (which include type Gl) contain the expelled and forgotten corpse parts and as a result expel a high amount of blood upon detonating. OEN pulse stars act as stellar reservoirs for post-summoning "dump off" points. In fact, entire districts of the Solar System, Regal System, Andromeda Galaxy, Orion, Bootes Void and Marins Supercluster contain stellar dumpoff points for sorcerers who regularly engage in the Blood-Practice (which has a high dumpoff ratio). The corpses expunged during these events are transported to distant stars where generally they are forgotten. OEN Grade stars, for the most part, form in the Bootes Void.

Stars of this type form primarily as a result of earthly misuse of spiritual artifacts. Generally, an N22 explosion can be linked to an earth-based scientific mishap (See the Lyzarn Handbook en Sciencfie Catastrophie) that triggered a cosmic event. While non-fatal, explosions of this kind are often seen as a harbinger of a future (and more dangerous) Type III explosion. N and N22 star-cores are comprised of dense hammerfilm to help maintain a stable gravidual atmosphere. It is essential that type N stars retain no less than a 6 to 6 to 15 gunstock ratio to prevent a supernovae event, and stars of this kind have a natural process that prevents this on most occasions. Explosions of this magnitude are thought to be the result of film-based failure, where the catalogued scientist was actually directly involved with the structural integrity of the star, and may have neglected to adhere to the stars innate inability to withstand film-matter.

Type III stars include a vast array of supernovae, the most well studied being the F and F22 grade. These explosions are by far the most dangerous because of the massive amount of energy, anger and angerstrength they expend. Though still the object of scientific debate, many have concluded that the process in which type III stars perish and explode is somewhat similar to that of its predecessor, the Grade N star. The spiritual remnants of grade N stars can often be lost in space and recaptured by Type III stars which have a much stronger thrennal core, and these thrennal cores are regulated by living matter.

For instance; A banished elemental may be thrown into a distant galaxy (or even dimensionally sealed), yet since Elementals are comprised of several consciousnesses, they may delegate their free will in such a manner that allows them to circumvent banishment. Unfortunately, they have no control over where the majority of their matter winds up. Coincidentally, type III stars universally absorb matter regardless of its dimensional standing or personal objections. Because of the arbitrary manner of absorbtion stars of this kind are massively unstable and are subject to the whim of whatever it absorbs, living or inorganic. In the event it absorbs something banished (or something that is simply power-hungry), that soul may deem it necessary to trigger a supernova in hopes of returning to the one whom it was banished from, whomever that may be. Inadvertently this not only expels them, but whatever demonic and banned materials that star had previously absorbed. Unfortunately this often results in massive, uncontrolled omnidirectional redistribution of demonic, spiritual and nonspiritual matter; some of which may consciously guide itself back to whatever location it desires. This often results in Genocide Events, Supermassive Natural Disaster, Dimensional Instability, Mass Pregnancy, Impeachment and spontaneous regeneration of forgotten realms & universes.