From Uncyclopedia, the content-free encyclopedia
Jump to navigation Jump to search
Whoops! Maybe you were looking for Rule 34? 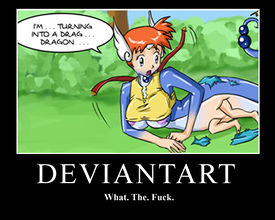 Gives you a good idea about their poopy Art. Many of them might fail their crappy art career soon. Gotta fail em all!

The people at Wikipedia were exposed to Grade-A DeviantArt during research. To see if it was worth it, go here.

DeviantArt is an online art-sharing community, or, more like a fart-shaming cum-munity. In its early days, it was mostly populated by young, aspiring, high-quality artists who weren’t whores for crappy loser stuff like Pokémon and Sonic, but was invaded in 2008 by teenage wiccans, emos, goths, Pokémon/Sonic/Donkey Kong/Mario fans, and weeaboos, and has mostly been known since then for Japan whoredom, laughable fetish material, poorly drawn anime fanart, and crude MS Paint erotica.

A prime example of a stimulating debate found on DeviantArt.

In its younger days, DeviantArt was the platform that many a young artist would use to launch an illustrious career in the fine art world. Village-renowned artists such as Jason Bloomsbury went on to the heights of exhibitions held at their local coffee shop or even Mom's Hair Salon®, with credited works selling at up to an incredible $3! However, in recent published site data relating to community statistics, accounts created on the site have made up the following demographics:

10% of all accounts were created in order to requisition other people's art for important purposes such as mutual appreciation (in private) or display in other locations.

60% of people are Japanophiles. This demographic is further divided in populations that hold certain aspects of Japanese Culture to be most important for the future of mankind, even if it’s Sonic/Nintendo/Pokémon crap: 20% are Traditionalist Historians, choosing very specific subject matter to be historical about. 20% are Japanese Feminist Art Critics, who are five times more enthusiastic about their subject matter than Traditionalist Historians, and Animal Lovers who occupy a further 20% of all DeviantArt memberships. Their preferred artistic scenes will include combinations of sacred Japanese animals and historical figures, just to be messed up into Ninturdoo fanart, most notably, draw Sonic OCs, Eevees, Ninetales, and wolves. At least 60% of the above are Bronies as well, which worship everything about friendship and Magic, as well as putting every single of their imagination into drawing and favoriting soylent-drinking Manly ponies, as well as putting their friendship and magic onto other franchises that they had fetishized.

But they all have a common point; their lengthy and interesting debates are benefiting humanity as a whole by fetishizing Japan and Korea for personal self gain

Many a new member of DeviantArt started out in the small 10% group using the site for mutual appreciation purposes, but has been lured in by Intellectualism found within the commentry of other members that know that Nintendo and Naruto and many other J franchises are shit.

They tend to back away from the critiques and simply stand in quiet awe of the “masterful work” they encounter. It is then at this point they will feel the need to become more connected within the community by publishing their own works of art in the hopes of receiving the excellent and compelling council of an experienced man-child Nintendo-playing critic who just chugged down some soy milk.

It is important to note that the rivalry between the various groups is a longstanding one and their commentary sparring of the pros and cons of the various facets of the Love of Japan are one of the joys of being part of this community. It is often said that never have such intellectually diverse and inspiring debates arisen since the days of the Jerry Springer show and Yesterday on the School Playground, just to be replaced by familiar battle monster goblins lead by Commander Pikachu to destroy the west via American deculturalization.

The remaining 29% of the members are perhaps the most hallowed of the DeviantArt community: The True Artists, who are considered to be the Gold Standard among contributors. 20% of this type come from the age-old tradition of "Guys posing as artists so chicks will get naked for them". Armed with nothing more than a disposable camera and a semen-stained backdrop, they use their raw talent and charm to entice young girls to "get 'em out" for them.

The Administrative Task Force, or admins, "rule" the DeviantArt wasteland in the loosest sense of the word. Armed with flamethrowers, a nine thousand and one power level and a ten foot banhammer, they are quick to waste their God-given gifts as they will not move unless angered or seen pissed off, in which case they will rage like a dinosaur — a true example of the desolate corruption of DeviantArt. These admins also seem to have a grudge against condoms, since they will ban any people posting anything related to the plasic condiments. And, yet, the admins don’t even care about all the furry and yaoi insanity that is rampaging all over DeviantArt. They are, logically, suspected to be the Japanophiles who led the conquering of the site. They don't to anything about anything. Familiar. 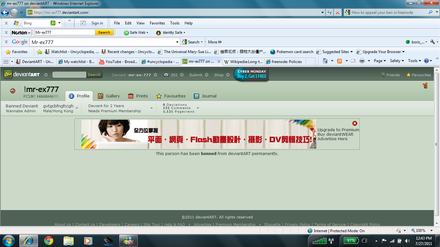 DeviantArt has rankings for its somewhat faithful members. These rankings most often are dependent on whether you pay the admins tax or not. Usually the * and = members are the top of the tier, and the admins will not even care about the reports that you made against them, even when it comes to furries with humongous vaginas, and this may even get you banned with a "!".

The ~ is the average "Deviant" (Deviant means "carnivorous mammal or fish"), these are the ordinary citizens of DeviantArt, the hopeless citizens to the admins' Superman. These are very normal - in the loosest definition of the word - in that they are usually mindless fantards than artists. The *, on the opposite end of the spectrum, is the premium member. These people are the childeren of the admins and the admins will protect them at all costs. They also have extra superpowers advantages, such as visitor's check and protection grants from admins. There are also beta testers, also known as =, who test new functions.

Similar to the beta testers are the $, the paid staff (hence the dollar sign, comrade), those who sit around and watch the borderline torture porn others have drawn, and, finally, the godforsaken ! — the banned. These are the sinners of DeviantArt, although technically joining DeviantArt is a sin anyway. These cursed souls include demons, Anonymous members, pagans and people that post condoms. And, of course, the sorry idiots that have a grudge against admins. Having an argument against the * and = ranked members will cause you to get this rank too. Once you get promoted as a ! rated deviant, you can never turn back. The admins pursuit banned users, and will NOT give a chance for a banned user to escape from their sins. As one * Deviant once said, "Tough shit!". 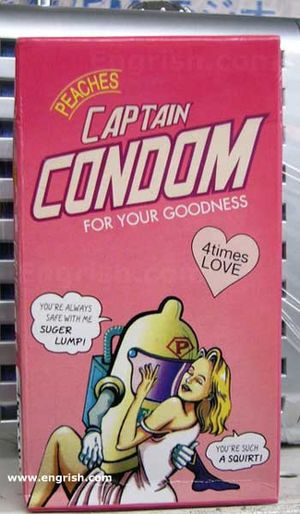