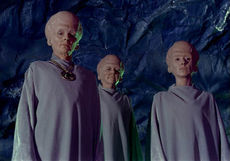 “ I alwayz findz myself in deepest contemplayshun over the simplest subjectz, cus what iz regarded as simple iz always the complekks. ”

The definition of an intellectual is as follows:

Intellectual: "This definition is very loose of course, and therefore serves well as a definiotion - in that definitions when loose, tend to serve well"

Intellectual: "But let us not dwell on these trivial matters, shall we?"

Intellectual: "Let us "get on with the action", as Ashlee would say."

The first was intellectual was Socrates. He invented the idea of sitting around on your arse and receiving plenty of plaudits about his alleged 'insights' on how the world is organised and what is the solution. Socrates refused to do any housework and spent most of his time in an Athens Taverna wearing just a sheet. His example was followed by every other intellectual who have insisted hard work = less time thinking.

So what exactly do intellectuals do (for a living)?[edit] 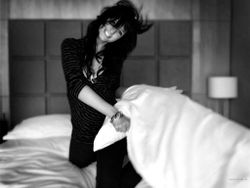 Intellectuals often engage in pillow-wars-like games and similar physically demanding activities, as can be observed in this photograph of Ashlee Simpson

Intellectuals often write/converse arguments in incomprehensible/wordsmith-ish language. And well...Hmm. No, that's almost it! Though, there are actually a selected few who manage to conquer their wordsmithery - for better or for worse you'd might say, because they very often realize that their arguments either aren't stating any opinions at all, or that the opinion stated is self-evidential based on the context. A typical intellectual quote can often be found written by the well known and held in high regard intellectual Oscar Wilde- an intellectual who absolutely must-have his intelligence scattered all over the net it seems,so just for the heck of it, here's another one of his:

“No other feeling is like the feeling of happiness. Simply by this reasoning alone, I have discovered that happiness is in fact a feeling!”

~ Oscar Wilde on happiness, quoted from the last pages of his book "Happiness, does it exist?"

Also, intellectuals tend to doubt everything until they have precisely defined what they doubt --which is everything-- in quotes, books and the like. Why? "WHY? Dude! Don't ask me why! That's just intellectual..." Well i don't know (infact, who does?), but this is obviously why you'll find an awful lot of intellectual quotes on the internet, simply because: that's just what they do. It's their thing so to speak. Anywho, besides writing dreary books and quote themselves from them, intellectuals tend to dwell on the meaning of life too! :D Famous intellectuals -- Søren Kierkegaard, Jean-Paul Sartre, Friedrich Nietzsche, Albert Camus and David Hasslehoff to name a few -- have theorized a whole lot on the subject and especially David Hasslehoff is regarded as a key-philosopher in this area of study. As you'd expect, David Hasslehoff developed most of his complex and often depressing theories of meaning on the most beautiful "Beach Laguna" while resting his arse in saltwater in the breaks of the recording of Baywatch - the TV-series with hot, sweaty and just unbelievably gorgeous babes.

The first scientific study on what an intellectual looked like was carried out by Pol Pot in Cambodia in 1975. An intellectual would have the following traits:-

It also known intellectuals are bad parents which is why (luckily) their children always end up in jail, politics or same sex relationships. The Cambodian study discovered that a third of the population of that country had one or all of these warning markers. They were in due course separated from the general population and made to grow food.

Since then other countries have adopted this tick list, and in the case of the USA, the Republican Party presidential Sarah Palin has promised to incorporate some of these ideas when the USA constitution is redrawn to reflect her new political realities. Other countries like Iran have added their own ways of identifying intellectuals by adding the word 'Zionist'.