From Uncyclopedia, the content-free encyclopedia
(Redirected from Sonic)
Jump to navigation Jump to search 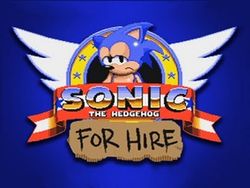 Our Blue Blur has gone through some hard times in recent years. Sad, really.

Sonic the Hedgehog (Japanese: Sonicuu uwu Hedgehoguu) is a video game series created by Sega. It centers on a blue Hedgehog named Sonic, whose life is constantly In Danger by the obese Dr. Robotnik Eggman. Typically, Sonic—often along with his friends such as Tails (Taylor), Nunkels, Amy, Edgy McHedge, Rouge, Dr. Mario, Big, Cream, Jet, and Snoc—does the must gotta go fast, collect rings, jumping on robots and free animals, grab the seven Chaos Emeralds, and foil Eggman's plans of world domination.

Since its inception in 1991, the Sonic series has spawned many different titles, each of wildly varying quality (For example: Sonic jam, Roblox murder mystery). While the Genesis games were side-scrolling platformers, the series has since expanded into other genres, such as edgy third-person shooters, sword-based Medieval adventures, and God of War clones where Sonic morphs into a werewolf and uses his stretchy arms to fight. 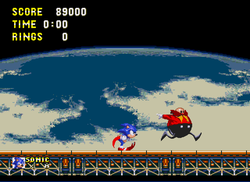 As it turns out, the Lord created one being faster than Sonic.

For the uncouth among us who choose lies, the so-called experts at Wikipedia have an article about Sonic the Hedgehog.

In the beginning, there was Zork. Zork begat Space Invaders, Space Invaders begat Asteroids, Asteroids begat Pac-Man, and Pac-Man begat the NES. The NES begat three sons: Final Fantasy, Metal Gear, and Donkey Kong. Donkey Kong begat Mario, and Sega grew jealous of Nintendo's legacy. Sega begat the Master System in its envy. Being a child of envy, the Master System was an abomination, but it begat a twin: the Sega Genesis and the Mega Drive. The Genesis in North America begat Sonic the Hedgehog, while the Mega Drive in the rest of the world did exactly the same thing.

For details on Sonic’s conception that amount to more than "when a mommy hedgehog and a daddy hedgehog love each other very much", see the article on conception. 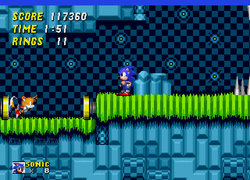 Unfortunately, Tails was not carved from the same stone as Sonic.

And thus began the first of many battles between the fast blue one and the slow fat one, who would be named Dr. Robotnik. Whence Sonic's original purpose was fulfilled, the Lord blessed him with him with a sidekick, who was his to do with as he pleased. And his first of disciples was known as Miles, but preferred to be called Tails. From thence, the duo rebuffed their efforts to defeat the fat one, and many a mighty battle ensued. These are chronicled in the second chapter of the Book of Genesis:

And thus began the first of many battles between the fast blue one and the slow fat one. They brought many great victories to Sonic in the name of the Lord, who showered him with blessings. The first of these were a pair of television shows, which brought great happiness to many for years to come. 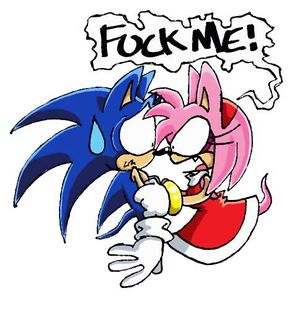 Amy is known to be slightly more direct than most fangirls.

Upon returning from the success of his second adventure, Sonic was “blessed“ with a dedicated fangirl, who was to be named Amy Rose, pursuing him 24/7, installing hidden cameras in his home, immune to restraining orders, more skilled in infiltration than Tom Cruise on a string and hornier than rhinoceros in heat. Following the Book of the Disk-Compression of Genesis, Sonic was blessed with a second disciple, Knuckles, and a third adventure, which was to be considered his best yet.

Unfortunately, these good times were not to last. 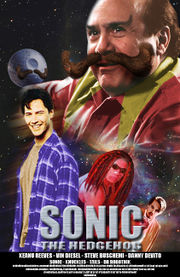 Zoom in and out of this picture while listening to the Carmina Burana.

On the heels of his Genesis adventures, Sonic was given the great blessing of a moviefilm. Unfortunately, this blessing turned into a curse, as upon the first collision with reality, the phailed spectacularly, and all involved deeply offended the Lord, who curst each and every one of them. Every one of them except Vin Diesel, cos that’s just a bad idea.

Steve Buscemi was curst by not dying painfully during the filming of the abomination, something which has haunted him to this day. Keanu Reeves was curst with the all acting skills of a 2x4 plank of wood, although this curse backfired when Reeves starred in the Matrix and never moved a face muscle for two hours. Tails was curst to be the first victim of the evil of fan-fictions, consigned to participate in acts unmentionable and have the eye-witness accounts posted across the internet for all eternity.

Sonic bore the worst fate of them all: he was curst with mediocre handled and "2.5D" games, for such failed consoles as the Sega Game Gear and the Sega Saturn. For quite some time, it appeared Sonic hath reached the end of his rope.

Return to (and speedy fall from) Glory[edit]

After a hiatus of multi-years, Sonic resumed questing against Robotnik, who had undergone intense rebranding as “Dr. Eggman”, and was polite enough to wait for Sonic. When Sonic returned, the Lord decreed that he must enter the 32-bit realm and do battle there. And for a time, all was good; so says the Book of Adventures. 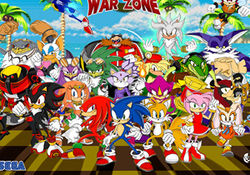 Before long, the disciples had amassed to such proportions that they could no longer fit on a single photo.

In his frustration, the Lord grew restless and began to lose his sanity, and began to make bad decision after bad decision, and “gifted” Sonic with disciple after disciple until he proved the phrase “twelve’s a crowd”, thus given in the Book of Heroes.

Salvation briefly came when the Lord gave in to the superior handheld console prowess of its old rival Nintendo, and Sonic sought to conquer the realm of the DS with the aid of his newest disciple, Blaze the slightly warmer than normal. And it was a great success, his return to 16-bit glory documented in the Book of Rush.

In a sudden unexpected turn of events, the Lord decreed that Sonic must race for his pleasure against a green abomination whose voice was known to have all the properties of a belt sander: loud, rough enough to skin a cat in seconds and shouldn’t be left near children. And it was laughable, but had its charms, and was if negligible effect to his reputation, and the event was recorded in the Book of Riders. We will not quote the scripture here, as the coarseness of the green abomination’s voice was recorded to such detail that reading the scriptures of the Book of Riders will result in permanent brain, spleen and self-esteem damage.

Through his years of mediocrity, Sonic had angered the Lord to the extent that he created a great curse upon Sonic, which is documented in full in the Book of Horrors. The Book of Horrors explains in full the sheer wrath the Lord can inflict upon Sonic and his disciples. No matter how Sonic protested, it was demanded that he be stricken down in the year of the number of the beast: 2006.

Upon realizing his error, the Lord grew merciful, and in his infinite wisdom [sic] he granted upon Sonic and the hedgehogs of the apocalypse and their respective amigos, a Deus Ex Machina: He smote the villains and struck down the beast in a bizarre twist of events which caused all the events of the Book of Horrors to never happen and the book itself to disappear from existence. 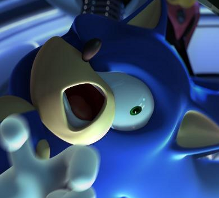 Upon realizing his mistake, the Lord decided to redeem (or at least try to) his messenger on Earth by splitting into pieces and making him put it back together again. He was once again curst with an annoying sidekick for his previous indiscretions. And while the Lord meant well, the road to hell is paved with good intentions, and Sonic's daytime sojourns were smote by turning into Mr. Stretchy Werewolf at night and wandering through cities of clueless buffoons.

After the restoration of the Earth, the Lord decreed to his disciple that he shall relive the days of his youth twice. However, this decree was flawed, and resulted in Sonic traversing through lands too resemblant of the lands of which he traveled before and easily completing his second adventure by using his best friend as a spinning wheel.