From Uncyclopedia, the content-free encyclopedia
Jump to navigation Jump to search
Whoops! Maybe you were looking for My Yu-Gi-Oh! collection, or Yah-Weh-Oh? 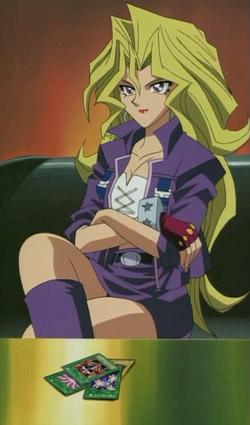 Yu-Gi-Oh! (often referred to as Fake Pokémon) is a popular Japanese short TV series written, produced and directed by Little Kuriboh. The series was created as a comedic alternative to the twenty minutes-per-episode anime currently on the market by compressing each episode into the space of two minutes. Little Kuriboh decided on this course rather than writing a full anime because he couldn't be arsed of industrial demands. For those of you who don't like pagan games like this, then you can always try the Christian spin-off series Yah-Weh-Oh!.

Yu-Gi-Oh! Takes place in an idyllic fantasy world, where every disagreement and conflict is resolved by playing a children's card game. The series opens with an introduction to the main character Yugi Motou , a disabled child suffering from spontaneous ball-dropping syndrome resulting in odd shifts from deep to high-pitched voices. Yugi visits his grandfather, owner of the local card shop with an unhealthy habit of ending up in some form of trouble. Here he shows Yugi his deck of cards containing the "super-rare-awesome-chocolately-fudgecoated-mega-super card", the Blue-eyes White Dragon, to which he is later mugged by an incredibly rich asshole called Seto Kaiba who beats him at the child's card game resulting in Yugi's Grandfather to somehow require medical attention. Kaiba, now in possession of the Blue-eyes white tampon tears up the card after going through all the trouble of stealing it. Yugi suddenly enters puberty and settles the score by playing a game of cards which he wins so Kaibi runs off somewhere, and everyone flies off to some island to play some more card games or something, I dunno I got bored and decided to watch Top Gear. Yu-Gi-Oh! GX, is a spin off series set 10 years after the first series. It was not as popular as the first series, but ten times gayer. It follows the story of Jaden Yuki, a nerdy school boy with no chance with chicks. So in order to make his life better, he decides to enroll in an elitist boarding school established by Seto Kaiba, known as the Duel Academy. The season was parodied many times by its original creator, LittleKuriboh. 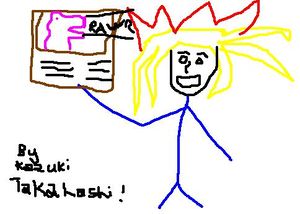 Following the success of LittleKuribo's short series, certain members of the anime community sort to destroy this new "short-anime" which sort to threaten the entire anime industry. One of these men was none other than serial plagiarist Kazuki Takahashi. Deciding he and his Nazi animators could not allow a revolution of short animations to take place, making the majority of their jobs redundant, he decided to recreate the entire series into a full length series with grueling twenty minute episodes. As Mr Takahashpipe had no experience in doing his own work, his own attempt at copying the series was a complete failure and was thus left with no other choice but to cut and paste from the original short series to make the full length show. This resulted in a repetitive anime (And thus indistinguishable from any other Anime) based on the theme of the show, playing a children's card game, giving rise to the Yu-Gi-Oh! Abridged seres.

In May 2007 while Little Kuriboh was working on his first Yu-Gi-Oh film, he came across the abridged series on YouTube where he subsequently had Kazuki's arse "handed to him" in a year long war legal battle in which many Giant Robots and scantily clad school girls were raped and destroyed by tentacles. Kazuki Takamoustachi was forced to pay ¥23,000,000,000 (£24.65) in damages to Little Kuriboh, who went on to release his film, Yu-Gi-Oh the Movie in June 2007 with a thirty one minute run time.

Following the massive success of Yu-Gi-Oh, Konami saw a cash grab opportunity in the "Duel Monsters" game from the show and, alongside 4Kids, began to print the cards in real life. 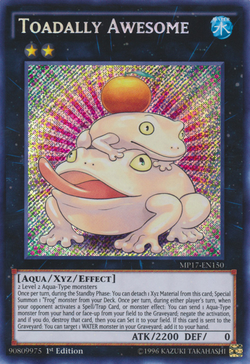 I hate this froggy bastard.

Unfortunately for people actually interested in playing the game like in the show, when you put the company that is known for pachinko machines and getting rid of Hideo Kojima in charge of a trading card game, you can tell the bastards will focus more on the money part than the balance part. Playing in real life fucking sucks. There's no badass duel disks, the monsters don't actually appear (by holographic projection or ancient Egyptian magic) on the field when you summon them, and worst of all, instead of everyone playing it in the cartoon (including super hot chicks), most of the time it's just other sweaty nerds who all play the exact same shitty meta deck. Not to mention, you never actually play any of the cards from the anime, because in real life, they're fucking terrible. You end up playing the deck EVERYONE else is playing, which is usually Invoked El Shaddoll True Draco Dinos[1] or some shit. Konami is so fucking stupid, man. They don't care about the game, all they care about is making money. And Konami acts like they care about balance when they put out their stupid little banlists, but in reality they just want to ban the cards that are winning games so you have to buy more overpriced bullshit cards that can win the games. What a bunch of Money-Hungry retards. Yu-Gi-Oh was my fucking childhood, man. I watched EVERY single episode of the show, and I still can't wait until they make a new season. I own a duel disk, and I've collected almost every single card in existence, even though 3/4's of them are shitty pieces of shit. Stupid-Ass Konami oughta just put me in charge of making all the new Yu-Gi-Oh cards. I bet I could release them 10x faster than those fuckwits, and with so much better damn card design too. Oh, what's the fucking point? Even if I could save the entirety of Yu-Gi-Oh (which I totally could), there would still be those goddamn Meta-Deck players who would ruin my card design with their stupid gimmicks, forcing me to ban my own cards that I made. I wish I was in the show world, I would be King of Games because I'd use my super-strong badass dragon deck and summon like 4 blue eyes and just fucking kill anybody who tried to beat me. Then again, if I brought cards from the real world, the bastard characters would probably play true draco zoodiac burn or some other dumb meta deck. Not to mention all my stupid little brother does is play Magic: The Gathering. That game sucks my hairy balls!!! Fuck this, I'm gonna go beat off to Dark Magician Girl... 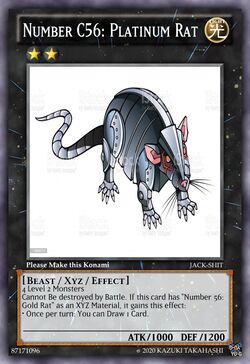 For those without comedic tastes, the so-called experts at Wikipedia have an article about Yu-Gi-Oh!.
v · t · e
( v · t · e )
Mass Media