From Uncyclopedia, the content-free encyclopedia
(Redirected from Grandfather)
Jump to navigation Jump to search
“You know, I didn't have everything handed to me like you did. I had to work my way up in the world.”

“I don't care much for him any more, but back in the day, your grandfather was one sexy man.”

“He has the exact same powers as Apache Chief, but he smells like poop and calls me Manuel.”

“I don't trust him, looks like a shifty Jap!”

“I've got one word for you - Grandpa”

~ That guy who invented Grandpas on Grandpa

Grandpa, also known as Grampaw, WoodysGamertag, Grampa, GrandaddyJoe, or Grandfather, is your mother's or father's father, or (in case of incest) both. Grandpa is widely noted for the great big fish he caught back in '63, his hatred of foreign cars, and rambling, pointless stories about the Depression, the Big War, or life in general. 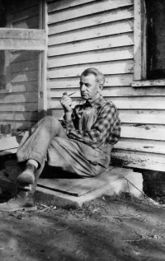 Grandpa in his wedding picture

Grandpa was born a long time ago, presumably before Dad but after Great Grandpa. Little is known about his childhood, but when he was a young whippersnapper, he didn't have any of these newfangled stereos or walkmans or whatever else kids have these days. When still a young child, Grandpa did all the chores on the farm, even though he had school. He didn't slack off, because he had to help his Pa support Ma and the sixteen kids.He is also know as woodysgamertag,

At some point in his early life (it is difficult to say when) Grandpa went to the big war. Although his military Service pack actually consisted of six months fixing planes in Phoenix, Arizona, he will tell anyone who listens that he saved his platoon from the Nazi menace and singlehandedly captured Dresden. Grandpa came back from the war with some kind of a medal, and he brags about it a lot, but when you ask to see it, he always changes the subject to the weather.

Some time after arriving back in the country, Grandpa married Grandma and subsequently had Dad, or Mom, whatever the case may be. Times were hard, and there wasn't much money to go around, but Grandpa made ends meet by working two jobs and saving whatever extra money he had. As he will tell anyone within a five-mile radius of himself, Grandpa always stood up for what was right, and always adhered strictly to The Bible. While this conflicts with the mysterious story about Miss Jones' unexpected baby, everyone has learned not to bring this up.

Grandpa's life in the last couple of decades has mostly been confined to the home, where he plays Bingo or yells at the nurses. Occasionally, he ventures to Branson, but always comes back tired and cranky. In the past couple of years, a lack of coherence in Grandpa's stories has been noticed, but this is attributed to his new heart medication. A couple years ago, Grandpa tried to drive, but after only going a mile in fifteen minutes, Uncle Jim decided that he would take over for the rest of the trip to The Cracker Barrel.

In addition to being the only person in the home who has won Bingo four times in one day, Grandpa caught a big fish back in '63 which was featured on the front page of the local paper. Grandpa also used to be an accomplished mechanic, but quit after he got a chainsaw confused with a hammer. Grandpa also allegedly has won quite a lot of money from poker in his day, although he seems to downplay this accomplishment every time Grandma is around.

“Back in my day, we did real stuff. We didn't sit around and listen to rock n' roll 8-tracks or play Atari all day or whatever else you kids do. The forest was my playground! It was also my toilet, but that's a different story.”

~ Grandpa on his childhood

“Back in my day, if we got caught trying to kill an innocent fly or ant, we'd be lucky to live in the same house by the end of the night. We'd also have to pay the medical bills for the injuries that they picked up from you. Not to mention all the explaining your parents would have to do to get you off with a slap on the wrist from the judge.”

“Now, everybody says that those Nazi bastards put up a good fight. I say that's bull crap! Those Nazis didn't stand a chance against us. In the Battle of Midway Atoll, I took out four of those guys without firing a single shot! You should have seen the look on Adolf Hitler's face when I did that! He was so mad that he sent a whole Nazi division after me. They chased me all around the world, but I escaped by pretending to be a young French maiden in need of some company. On a side note, that's also how I learned all about the birds and the bees. ”

~ Grandpa on which kind of oatmeal he prefers

“Back in my day, we didn't have the Backseat Boys or Madonna or whatever else you young hipsters listen to these days. We had good music, like that one guy! You know who I'm talking about, he sings pretty good! But as soon as that Elvis Presley started shaking his you-know-what all across the country, it didn't take an idiot to know that music was dead. I mean, show a little decency! These singers don't know the meaning of the world! I was switching channels from Matlock reruns to the Pottery Network when I saw one of your so-called music videos! This young woman was barely wearing anything and shaking her hips like she didn't know that she was on the television! Incidentally, that's also the first time I've gotten a boner without Viagra in thirty-five years. ”

~ Grandpa on where the bathroom is

“You know, you young hooligans are what's wrong with America. After I was sixteen, I dropped out of school to clean hog manure. Education! Bah! Who needs it! I never got no schoolin' ya see. Everything I learned came straight from the college of hard knocks. But I educated myself. But look how far I've come. What have you done lately, punk? Nothin', that's what. You just sit there, staring at the TV screen, watching your mind-numbing slop. Oh hey, Antiques Roadshow is on! ”

~ Grandpa on how his doctor's appointment went

~ Grandpa on the O'Reillys moving in

~ Grandpa on the Freemans moving in

~ Grandpa on the Gonzalez moving in

He sure liked Reagan. And Palin, but downplays this idea whenever Grandma is around. Not really.