From Uncyclopedia, the content-free encyclopedia
(Redirected from Bingo)
Jump to navigation Jump to search 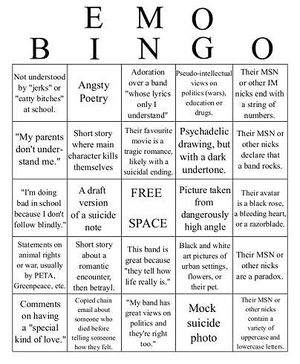 A sample Emo Bingo card.
“I think its an excellent way for emos to die in style.”

Emo Bingo is the rather hardcore game of bingo, now played instead of Goth Bingo because the suicidal cliche has now been usurped from the Goth movement.

You and your friends (Ha! Yeah, right.) should gather around a computer and open up your internet browser of choice. Here, you should lay down the following ground rules:

The card is divided into 5 collumns, each with a specific theme.

How the Game is Played[edit]

Open a random page into any of the selected "blogospheres". Take turns pushing links on the friends list. On each page, cross out any one of your squares that occurs on that page. If you get 5 in a row, stand up and shout "I'm going to cut myself!" and sit down. A winner is you!

For more fun, play for patterns (the Square, the Tee, the Cross, the X), play cards back to back, simultaniously. Furthermore, if this is not enough to satisfy you, you can play "Fake the Emo" bingo, in which you start accounts in order to confuse emos into believing your lies. Whoever gets the first fatality wins! Yay!