~ Joseph Stalin, utilizing a variation of the warcry.

“Despite my inherent love for the word "fuck", I find this warcry rather tasteless.”

~ Oscar Wilde on the Soviet warcry

“No, comяade, in Soviet Russia, warcry screams YOU.”

~ Russian Reversal on the Soviet warcry 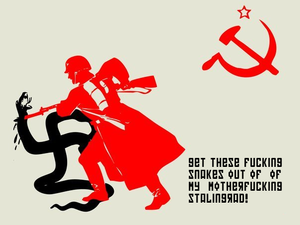 A variation of the warcry.

The Soviet warcry was something shouted by the comяades of the Soviet Union. Invariably it included the word "fuck" or some other expletive, in any sort of language, although sometimes the word "teapot" was used instead. It became quite popular during the time of Vladimir "Baldovich" Lenin and Nikita "Lil' Nik" Khrushchev, however it was most widely used by Joseph "Hell's Angelski" Stalin. The League of Nazi Gentlemen (which does not, I'm afraid, accept Jews without explicit permission from his brilliance) faced the full brunt of this warcry, and they began to get quite sick of it. When they asked for counselling on how to deal with it, when attacking Stalingrad, Hitler made a rather tasteless pun, involving a Russian, a Jew, and the words "shizzle ma nizzle". This added impetus to the Soviet cause, and allowed them to subdue the Nazis and force them to listen to literally hours of the warcry, in order to perfect it. By the time of the General Secretary in disguise, they were really quite good at it. The Cold War was due to those damned Republicans in Amerika objecting to the word "fuck" being used, or any other sort of expletive. The war cry went something like this:

“I am bored, comrade. Shall we scream needlessly into the faces of those we are angry with?”

~ The original conception of the Soviet warcry.

Back in the USSR (and you don't know how lucky you are, boy) people had a lot of time. Three men sat around a table, smoking cigars and drinking the Russian version of what we in the west call "water", Vodka. After the sheep they'd been using for entertainment broke a hip and became useless, they cut it up and ate it. Now, there's only so much of this you can stomach in one evening, and so the trio returned to the great outside to think of something else to do.

And then an idea hit them.

Why not invent some saying that would be annoying as hell to enemies but fun to shout, fun to create and all round fun to use to antagonise the rest of the world? Genius! One of these men being Vladimir "Baldovich" Lenin, of the Soviet band, he had the power to make such a saying official. But where to start? How could three, average (and equal, dammit, equal!) comrades create something to change an entire nation? They needed to brainstorm. Their first idea was somewhat lacklustre.

This original idea, although approved by all three, was soon discovered to have been copyrighted by Osama Bin Laden and Mahmoud Ahmadinejad. So they turned for more ideas.

Although this was rejected almost immediately, and all three denied ever having put it forwards, the word "teapot" snuck into the Soviet warcry for the next three thousand years of the Soviet Union's existence, and into the time when it went into hibernation and pretended not to exist. All three were completely lacking in what to have as a warcry for their new Union. And then, all of a sudden, a fly landed on the arm of Lenin, and he screamed:

And they had it.

~ Karl Marx's enthusiastic response, when he heard what his "children" in the Soviet Union were doing. 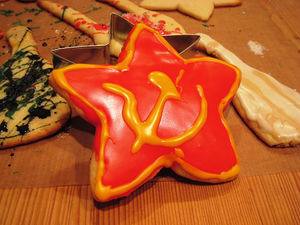 A cookiee was given to those who used the cry to great effect.

Lenin made the Soviet warcry, which was then just "the warcry" into the official warcry of the Soviet Union, narrowly usurping the former warcry named "Love Story". Although some in the Soviet Union weren't so enthusiastic at first, when Joseph Stalin took control he began immediate work on furthering the warcry. His inherent love of cussing and killing people combined to give him the ability to scream the warcry before killing somebody. Joe became so overjoyed at the result that he continued using it, when gardening, walking on the beach, making daisy chains or playing tennis. When the Nazi's invaded under Hitler, the warcry was given the award of Hero of the Soviet Union, for being the principle defense of the Soviets and repelling the Nazis. No one in the Soviet Union complained about this, because they all agreed. It's impossible to disagree, because the noise of anyone's disagreement would have been completely drowned out by the screaming of many men and women using the warcry. But, hey, we're not complaining, seeing as complaining against the saying would have been batshit crazy. 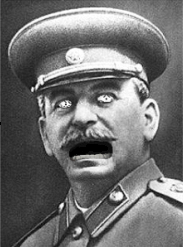 And Russians are never crazy, are they?

After Stalin's death, many leaders chose to use it further. Although "Lil' Nik" Khrushchev liked to use the saying regularly, his enthusiasm didn't match that of Stalin's. The Soviet warcry went into almost hibernation for a time, before starting and successfully winning the Cold War. Despite what the Americans might suggest, the Cold War was a failure for them. The Soviet warcry won the day in such places as Vietnam and North Korea, true models of development. The Soviet warcry was eventually drawn out of the cupboard by Mikhail Gorbachev, although some claimed it was actually his birthmark summoning the warcry in one of the times when it gained a mind of it's own. Gorbachev was a keen fan of intermingling the word "teapot" in with the warcry, and this heresy led to the so called "downfall" of the Soviet Union. The Soviet warcry, however, kept it alive, and Putin took the rains in order to pretend the Soviet Union no longer exists.

And you know it.

And the warcry still remains.