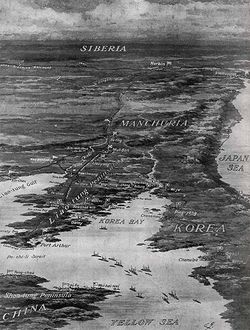 The Russo-Japanese War, fought here in Korea and Manchuria.

The Russo-Japanese War, as its name implies, was a conflict fought between the Russian Empire and the Empire of Japan. As its name doesn’t imply, most of the fighting took place in Manchuria and on the Korean peninsula, much to the distaste of the people living there at the time. Hostilities began on February 10th 1904, and lasted until September of 1905, with the budding Japanese Empire emerging victorious. Indeed, Russia’s army of conscripted peasants armed with bolt-action rifles and empty vodka bottles proved wholly ineffective against Japan’s numerous cyborg ninjas and fleet of giant robots piloted by angsty fourteen-year-olds, resulting in the Russian forces being completely routed at every single major engagement of the war.

Though the Russo-Japanese War is largely forgotten today, its importance should not be overlooked. Japan’s resounding defeat of the Russian Empire led to a power shift in Eastern Asia, resulting in Japan’s ultimate recognition by the world community as an imperial power just as corrupt and oppressive as those of the West. Russia’s tremendous loss of life, material, territory and international prestige, meanwhile, set an important precedent in the way Russia would fight all of its future wars.[1] Finally, the war’s cessation at the behest of American President Theodore Roosevelt not only gave the United States the century-long confidence to meddle in other nations’ affairs, but also set the important precedent of an American President being awarded the Nobel Peace Prize despite doing absolutely fucking nothing at all to deserve it.

Origins of the War

For those without comedic tastes, the so-called experts at Wikipedia have an article very remotely related to Russo-Japanese War.

After the Meiji Restoration in 1868 and the first appearance of Godzilla in 1871, the Meiji government embarked on an endeavor to assimilate Western ideas, technological advances and customs.[2] In just a few short years, Japan had gone from an isolated, ethnocentric and technologically backward nation to an extremely idiosyncratic vestigially-ethnocentric technological powerhouse. By the turn of the century, Japan was the world’s leading producer of bellows tripod photocameras, built the finest jalopies in the world, and was fascinating export markets with innovative new products like the Stroll-o-phone.

Russia, meanwhile, was a country still very much in chaos after the progressive Tsar Alexander II abolished serfdom in 1861. Despite this and the introduction of other destabilizing factors like basic machinery and already-centuries-old Enlightenment ideals, the Russian Empire was still very much a force to be reckoned with. Like today, Russia commanded by far the largest land mass of any country, with a mere 50% of it being nigh-uninhabitable arctic tundra. What’s more, the Russian Empire’s vast agricultural and industrial potential meant it could easily outpace other nations in terms of both ignorant backwoods peasants and crushing urban malaise.[3]

At the beginning of the 20th century, both the Russian Empire and the Empire of Japan had their sights set on expanding their influence into Manchuria and the Korean peninsula. For an in-depth discussion on the socio-economic factors and political machinations that led to this mutual desire in both nations, see here. 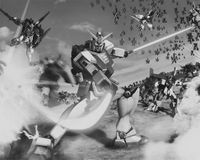 A small Japanese robot regiment, circa 1905.

Declaration of War and the Assault on Port Arthur: Japan Gains the Upper Hand

On the night of 8 February 1904, the Imperial Japanese Navy opened the war with a surprise battle mech attack on the Russian ships at Port Arthur, a solid three hours before any official declaration of war had been made.[4] A stunned Tsar Nicholas II ordered that the Duma declare war on the Japanese Empire. Eight days later, the Russian Empire reciprocated Japan’s war declaration, demonstrating both the speed of Russia’s strategic decisions and the efficiency of the Duma.

By the time Russia made its official declaration of war, however, Port Arthur had already been effectively neutralized as a serviceable naval port by the Japanese and their aerial mech onslaught, destroying most of the Russian Far East Fleet in the process. Left without any serviceable capital ships in the Pacific theater, the Russian high command decided to send the Baltic Fleet to the Pacific as reinforcements, leading to one of the most exciting actions of the war as the Baltic fleet sailed the 18,000 nautical miles to the Pacific over the course of 15 months.

The Battle of the Yalu River: Japan Gains Even More of an Upper Hand

After annihilating most of the Russian Far East Fleet, the Japanese Empire was left virtually unopposed in the Sea of Japan, allowing them to land major contingents of tengu cyborg ninjas at the Korean ports of Inchon and Pusan.[5]

In contrast to the Japanese strategy of rapidly gaining ground in Korea and Manchuria, Russian strategy was focused on retreating en masse from areas the Japanese were about to advance toward. Upon retreating all the way back to the Yalu river, Russian forces realized they could not retreat any further, as the Trans-Siberian railroad had not yet been completed. Forced into fighting a ground battle, Russian forces held their position across the Yalu River from May 1st up until May 2nd, whereon they were routed thoroughly.

The War Drags on: Japan Maintains Its Upper Hand 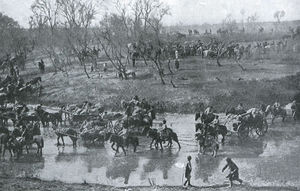 The Imperial Russian Army gloriously retreats after the Battle of Mukden.

After the flurry of activity in the war’s opening months, the second half of 1904 was characterized by stalemate—the Russians had retreated as far into southern Siberia as it was physically possible to, and Japan’s battle mechs were perilously far from their supply bases in Japan. Despite this, however, a handful of notable engagements did take place after the spring of 1904. In the April of that year, two Russian pre-dreadnought battleships under the command of Admiral Makarov managed to break through the Japanese blockade of Port Arthur only to hit mines and sink anyway, making Admiral Makarov the most effective Russian naval commander of the war. In the August of 1904, yet another Russian battle squadron attempted to break the Japanese blockade and head toward Vladivostok—the Japanese, with only a handful of mechs on hand, managed to sink the squadron anyway. In the October of 1904, the Russian Baltic Fleet, still on its way to the Pacific, opened fire on a fleet of English fishing vessels off the coast of Dogger Bank,[6] having mistaken them for Japanese warships, despite the fact they were still roughly 16500 miles from Japan, nearly bringing Britain into the war on the side of the Japanese.

The Battle of Tsushima: Yeah

Eventually, the Russian Baltic Fleet, which was sent to relieve the besieged Port Arthur, reached the Pacific. However, news that Port Arthur had fallen reached the fleet when they were at port in Madagascar after rounding the Cape, severely demoralizing the fleet’s already-highly-demoralized crew. As such, the commanding Admiral Rozhestvensky ordered the fleet to reinforce Vladivostok, the only location of strategic importance in Northeastern Asia not controlled by the Japanese. In order to reach Vladivostok, Rozhestvensky, in all his brilliance, opted to take the route through the Sea of Japan, where his fleet was promptly intercepted by the Japanese as Japan was only a few miles away.

The resulting engagement has become known as the Battle of Tsushima, named after the Tsushima straits Russian Admiral Rozhestvensky had so boldly sailed into despite being so perilously close to Japan. As it stands, the Battle of Tsushima is naval history’s only decisive battle fought between pre-dreadnought battleships and 40-story tall robots armed with laser cannons. It also provides a classic example of the age old naval tactic of “crossing the T,”[7] as Admiral Togo’s battle mechs “crossed the T,” or “kicked the shit out” of the Russian battle fleet. 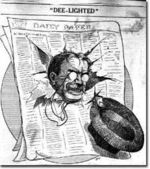 Peace talks would have gone much more smoothly had Roosevelt not audaciously stuck his head through each draft of the Treaty of Portsmouth.

The Russo-Japanese War grabbed the interest of American President Theodore Roosevelt, who was in search of something to do in between his notorious fits of trust busting. Roosevelt took it upon himself to mediate peace between the two warring powers, citing the United States’ close geographical proximity to both Russia and Japan as justification. Fittingly, a war between Japan and Russia fought in Korea and Manchuria was ended by a treaty signed in Portsmouth, Massachusetts. Though the Japanese had thoroughly beaten the Russian Empire, they were compensated with only the southern half of Sakhalin and a “sphere of influence” over Korea. Japanese delegates at first protested, but were bullied into compliance by the sheer size of Roosevelt’s stick.

For his role in fairly mediating peace between the two warring empires, Theodore Roosevelt was awarded the Nobel Peace Prize in 1906, making him arguably the most deserving US President to ever have the honor bestowed upon him.