“There are Christians there? Oh fuck it, they're still Japs”

Nagasaki (population 0) is the southernmost major port in Japan, on the west side of the island of Kyushu. The city was named for drunk snakes ("naga" with a lot of "saki", which were frequently eaten by the locals, which explains why they suddenly liked Dutch traders). It became unique as the only city in the country with a majority Christian population, due to the spread of Catholicism by 16th-century Dutch traders (who thought they were spreading Protestantism, but had the wrong books with them). The Dutch were particularly distraught by the violence of ruling warlords, and wished to educate the heathen with Christian values of love and peace so that they would learn, in time, to avoid the ravages of war.

The city also became famous as the setting for the opera Madame Butterfly, about a young Japanese woman who is abandoned by her American husband. The man, a sailor in the navy, leaves her with their child while he sails home and marries another woman. He later returns to Nagasaki and takes the child away. Her life ruined by an American in the military, Madame Butterfly dies a violent death (though ultimately, by her own hand) using a traditional weapon. She has to try multiple times, as the weapon is a traditional knuckle used by Moe of the Three Stooges.

A different kind of butterfly, more carnivorous, flew over the city at 11:01 a.m. on August 9, 1945, with a Fat Man in its talons. This man was not related in any way to Harry Truman (nor, apparently, was anyone living in the city); nonetheless Truman did not send the fatso plunging to his death without due consideration (after all, he was the offspring of Americans). Truman always calculated with military precision: he determined that if the Japanese did not surrender within 4487 minutes of the bombing of Hiroshima, they would need greater persuasion. There was no point in waiting 5000 or possibly 10 000 minutes to give the Emperor more time to consider surrender; and the weather would be overcast the next five days, which would mean a long time for the citizens of America to suffer in anxiety wondering whether the war would end.

For those without comedic tastes, the so-called experts at Wikipedia have an article about Fat Man.

Likewise, Truman calculated that a city with precisely the population of Nagasaki would have to be sacrificed: a smaller location might not be so awe-inspiring. He would not sacrifice one more life than was necessary to bring about surrender. American presidents, like their sailors, are always concerned with the effects their actions might have on people of other nationalities. Furthermore, there was a Mitsubishi shipyard in Nagasaki, and Japanese ships were killing hundreds of Americans.

Fat Man came to his end at precisely 11:02 a.m., along with thousands of other fat people, and thin ones as well. The citizens of Nagasaki had been living their ordinary lives, getting into pointless power struggles and arguments over the sushi and good (but now radioactive) Hiroshimese dishes of seppuku, not thinking about the pointlessness of pettiness in relationships. At 10:58 a.m., Tomoko Hakata was scolding her daughter for irritating her with yet another whining episode, not fully appreciating that the child was trying to express something the mother had too often overlooked. At 10:59 AM, Keiichi Morisato had broken up with Haruhi Suzumiya over a bad anime plot and rejoined his old flame, Belldandy. And at 11:00 precisely, Keiji Mataroshi slapped his best friend Hiroyoshi Shuya for interrupting him with a question that, unfortunately, Keiji did not wait long enough to hear. Shuya felt bad about the incident, but they would make up tomorrow, when he would have an opportunity to ask the important question again. 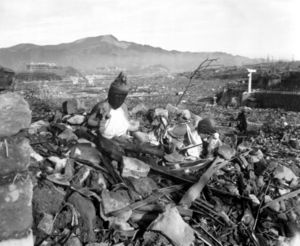 School's out. Where did the children go?

There was nothing after math in Nagasaki. Nor was there anything after science: science had ended everything. Geography was cancelled after science. Only history continued, elsewhere: the Emperor of Japan surrendered once he had a guarantee that he would remain monarch. Truman was re-elected by a grateful (American) public. The Americans and Soviets built 65 000 more, much more powerful Fat Men, in order to prevent war. 100 or 500 or 1000 Fat People were not enough to deter the other side. The Japanese believed that two would be more than enough.

Thousands of paper cranes were made by ordinary Japanese people, to help each victim recover from radioactive fallout. The crane-makers understood the importance of every life: Nagasaki reminded them of Madame Butterfly's tragedy at the hands of an unsympathetic military man. The opera was just a story, but the people of Nagasaki had understood all along that truth was much stranger than fiction.