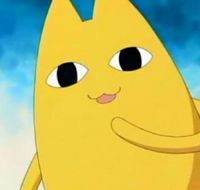 Neko, in his prime form, signalling that he is ready to eat his enemies.

“And so, one has dropped me to my knees, and possessed me to cry a river of beautiful tears(”

For those without comedic tastes, the so-called experts at Wikipedia have an article about Neko.

NOTE: "Neko" is also a term used to mean "catgirl". Why, you ask? BECAUSE IT'S FUCKING JAPAN, AND THAT'S WHAT THEY DO IN JAPAN.

Neko (猫、ねこ), also commonly known as Chiyo Chichi （千代 父） or Chiyo's Dad, is a character from the popular animu, Azumangay Daioh. He is highly popular, although known to secretly destroy anyone he hates during offscreen times.

Not much is known about Neko, when he was born, who his parents were, are all shrouded in mystery. What we know is, he has a daughter named Chiyo and he had sex with himself to produce her. We also know that when he is forced to remove someone to silence him, he cannibalizes them and then turns their bones into chalk.

Neko is known to have many hobbies, such as testicle licking and playing "qwake tu". He is also often seen around hot springs, "helping" young girls with their "cleaning" of their bodies (usually involving their "lower region") 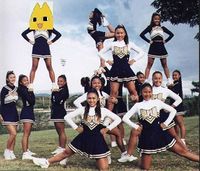 Neko, being sent to the top of the people pyramid after looking up skirts too often.

Neko started out whoring himself to female kitties to build up funds while increasing the size of his Ca Twang. When he had achieved a large enough Twang, he moved on to selling crabcakes in Los Angelos, but was shunned for being yellow by the racists.

He tried to recoup his losses by joining a cheerleading squad, but would be sacked later on as he would often take peeks upward while he was doing the "people pyramid". After being fired, he tried to apply for a job as a taxi driver, but he could not grip onto the steering wheels due to many factors, such as his lack of fingers, and the lubricative feel his palms have developed from touching the fresh young butts of teenage boys.

Later he joined the Yomiuri Giants of the Japanese baseball league, throwing 5 perfect innings and becoming the only Japanese pitcher to hit a home run in his first at-bat. His career looked promising until the post-game conference, when the authorities realized he was not human and suspended him.

Neko only began to be recognized by the masses when he struck a lead role in the animu Azumanga Daioh, where he would fondle female students, pretending to be a doctor under the cover of their classmate, Chiyo's dad. He would assist them in "cleaning" their "basements" and "mopping" them until they were squeaky.

A smarter student came on to his schemes, and he was forced to eat him, hence our not knowing his name up till now. As of then, Neko has put his molesting on hold, and instead focuses on sending girls to america and pretending to be a "bird".

His daughter Chiyo would then migrate to Amerika without him, leaving him and his nighttime english lessons obsolete. Neko tried to commit suicide but his hands did not have fingers, and thus was unable to pick up a knife.

Neko slowly faded out due to the cancellation of Azumanga Daioh, and has never been seen or heard of ever since. Some say he became a bird, while others say he might have been over sixty years old.

The True Strength of Neko[edit]

It is rumored that Neko has a hidden level of strength, only truly unleashed when one of the following conditions are fulfilled - 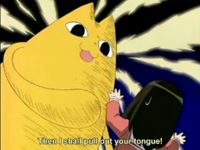 Neko, unleashing his true rage on an unsuspecting female student, who did not allow him to molest her.

When Neko unleashes his true power, none can stand in his way. He will go to any means necessary to ensure that his enemies' tongues are pulled out, and their genitals slashed and soaked in lemon juice. It is wise to commit Seppuku when Neko is in his enraged form, for the pain he will make you feel cannot be described by words.