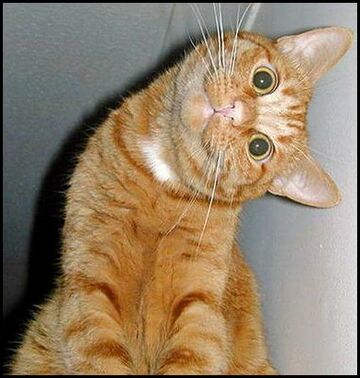 A stupid cat tries to understand the three-dimensional world.

Stupid cats (Felinus lentementus, not to be confused with other animals that are also stupid) are cats that are different from normal cats because of their Marxist tendencies. They are also known for their sheer monumental stupidity.

Stupid kittens are a nightmare left on Earth by the Greek gods before they were replaced by the singular Christian God. It had to do with the God of imbecility impregnating a half-donkey half-cursed-human who gave birth to a stupid cat because this made sense back then. Most stupid cats are stillborn which is actually a blessing. Those stupid kitties who survive must flee as humans have an instinct to exterminate them before they become dangerous communist adults. It isn't clear whether their preference for communism is intellectual (they have no brain activity) or encoded in their DNA (they don't seem to have DNA either). 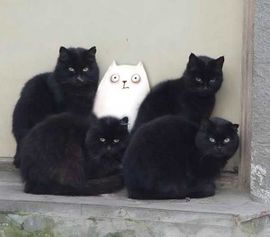 One of these cats is unaware that it is a cat.

Stupid cats do not go do Heaven when they die. Once dead, they are reincarnated as another stupid cat. Most stupid cats' souls spend a near-eternity in the wombs of mother cats, are then stillborn – or die within minutes of birth – and reincarnated instantly as a new stupid cat in a new mother's womb. In a scary sense, this means that stupid cats spend most of their time in a warm, loving and caring uterus before its brief, painful and terminal birth process. This might lend some understanding as to why stupid cats prefer controlled organised states over the luck of the free market.

Inside mass stupidity lies a sort of mass cleverness. When stupid cats group together (not a good idea) they naturally collectivise themselves. Theirs is a well-planned out stupid cat society with fixed factory quotas and minimal labour including job security and a public health system and benefits for life. This helps them somehow get by despite their collective incompetence.

How can someone not realise they have a stupid cat? 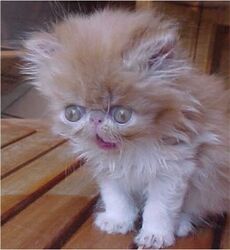 This is not a stupid cat but an abused one. While still mentally damaged, it can eat, make decisions and bring limited happiness to its owner.

If you are a civil servant who is dead in the soul, have no friends except your television and whose only achievement is winning Playstation games, you are twelve times more likely to own a stupid cat. If you are a broken alcoholic veteran who lives off of government subsidies and benefits, it is guaranteed you have a stupid cat. No one should feel sorry for stupid cat's owners, because the conditions they already live in are absolutely pitiful and sad.

Stupid cats may be mistaken for cats who have been bashed over the head by drunken owners. These mentally destroyed cats spend the rest of their lives trying to cope with a damaged brain. Stupid cats on the other hand do nothing but exist in a sort of sub-space and sub-time while bringing chaos to society without even trying.

The stupid cat brain is made of billions of neurons and synapses. Not a single neuron nor synapse is connected to another. How stupid cats can perform any body function is a mystery scientists are afraid to investigate. It might have something to do with the Greek gods' magic.

Stupid cats are not quite as stupid as house plants.

In Vietnam there is a famous saying: "The more dumb is you cat the better it taste." Stupid cats are a divine delicacy coveted by Asians. Even autistic cats don't taste as good as stupid cats.

Unravel a ball of yarn in front of your cat

If the cat plays with the yarn but then tires quickly of the banality of string and then logs onto the internet and begins to diversify your day trading portfolio spreading your risk leverage, then you have a cat that is simply a cat.

But if the cat stares at the wall, fails to sense any change in time and space and then falls down collapsing into a puddle of its own urine, then you have a cat that is a stupid cat. 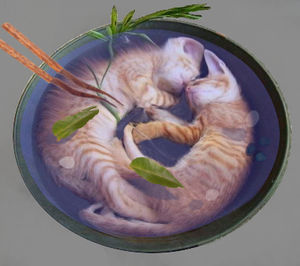 Cooked stupid cat is a rare Asian delicacy. It's best to marinate a stupid cat in an acidy solution for a week or so (a stupid cat will stay wherever you leave it). The cat has to be dropped directly into boiling water to blanch the fur (part of the joy of eating stupid cat is how the skin just falls right off). If the cat resists, meows and claws at your face, it was not a stupid cat and it has suffered a galactic amount of pain and torment and you probably won't sleep for a few days. Stir occasionally, bring down to a simmer and add a little salt and Worcestershire sauce or low fat soy sauce to taste. When done correctly this recipe turns out two cooked stupid cats. Serve with lemongrass, bay leaves and optional traditional Asian side dishes. When done wrong you will likely vomit up black bile and piss blood out of your anus.

The future of stupid cats

As Westerner's catch on to the humane trend of consuming stupid cats, they will eventually be eradicated except in communist countries (where many tend to end up anyways). Eventually when the old Greek Gods return and overthrow the slowly weakening Christian god and reassert power, one of the Gods, while drunk, will probably impregnate a she-goat and create some pet even worse and more stupid than stupid cats.

For those without comedic tastes, the so-called experts at Wikipedia have an article about stupid people who own cats.

Featured Article  (read another featured article)
Featured version: 15 November 2022
This article has been featured on the front page. — You can nominate your favourite articles at Uncyclopedia:VFH.