He's watching you, like a feline version of Big Brother.

Ceiling Cat was created long ago, when he created himself and all things. Every time the worlds align in their crystal spheres a harmonic tone can be heard, this is the coming of Coiling Cat to appease his worshipers in the Cult of Ceiling Cat. They revere him by their ancient traditions (see masturbate)and accept his whispered secrets and truths. Typically it cuts a crude hole in your ceiling, and proceeds to observe you act out your perverted sexual fantasies from its superior vantage point... it may even give you decent cooking advice if it cuts a hole in your kitchen ceiling, but DO NOT COOK the Ceiling Cat. No matter how much its flesh tempts you.(Eating ceiling cat is not advisable, he has minions)STAY AWAY from the Ceiling Cat at all costs - these creatures are dangerous when cornered. The Ceiling Cat is able to view chronic masturbators through the installation of cameras, because having to go to every person is ineffective in a few specialize situations.

Please use correct grammar on this site or we will hunt you down and place a Ceiling Cat in your home! LONG LIVE CEILING CAT, AMAIH CEILING CAT!

Ceiling cat is the god of all cats (and hoomins, the lolspeak for human) and can do anything. He is constantly at war with Basement Cat.

If you let him stop you, you FAIL. And if you fail, whithin seconds the ceiling cat will appear. Ownage will soon follow on your part.

The discovery of Ceiling Cats[edit]

In the late 15th Century, the Earl of Batavia, after a session of 'Choking ye olde dolphin' looked to the ceiling and said, "Holy Shit! How long has that little pussy been watching me pleasure myself?!?! I better go into the attic and see what's going on!" The Earl was never seen again. The Earl was also a frequent huffer of kittens, and somehow successfully captured the Ceiling Cat. It was a indeed a battle great, and it ended up with the Earl of Batavia containing the only known captive specimen of Ceiling cat ever caught on canvas. The Earl attempted an early form of Kitten Huffing, but was inexperienced of the practice and was unable to do so. Some speculate that he died, others speculate that he overdosed. The truth is unknown, all that is known is that he died of a kitten huffing overdose...

How to get rid of a Ceiling Cat[edit] 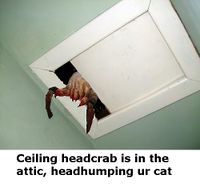 A rare glimpse of the ceiling headcrab: This particular specimen is about to skull-rape you.

You may have recently been bombarded with pop-ups trying to sell you "Herbal ceiling cat deterrents" with "no side effects!", guaranteed to "rid you of your ceiling cat troubles once and for all!" and "I`crease Your Sexual Desire and Sperm volume by 500% L'onger o`rgasms - The longest most intense orgasms of your life Multiple o`rgasms". DO NOT BE TRICKED INTO BUYING THESE USELESS "DETERRENTS". The sad truth is that no effective Ceiling Cat deterrents currently exist on the market, and these people are just trying to scam desperate and horny old ladies (old ladies like their privacy) out of their hard-earned cash in an effort to make a quick buck.

The only known effective deterrent to ceiling cats is an experimental product from the Xen Extraterrestrials, Now! (XEN) corporation called the "Ceiling Headcrab." Ceiling headcrabs are immune to ceiling cat lasers but light kills them! This product will route the ceiling cats out of your attic and interstitial spaces at the minor expense of turning the ceiling cats into blood-thirsty ceiling cat-zombies (a.k.a. "pussombies") which will attempt to eat your brains if you are caught masturbating, or seclusive, stationary ceiling cat-barnicles (a.k.a. barnicats) which provide aid in performing autoerotoasphixia. These trade-offs are most welcome to the cat-infested community because pussombies move more slowly than the lightning-quick laser eyes of ceiling cat, and barnicats are easy enough to kill if you happen to have a drum of gasoline and a few bullets laying around. One major product drawback is that ceiling headcrabs have an intrinsic tendency to break electronics like computer monitors and pan-dimentional teleporters, but this is only a real problem if you attempt to de-beak and domesticate a ceiling headcrab as feral ceiling headcrabs naturally avoid human living quarters. Unless you are wearing orange; they hate that colour. And they hate crowbars for some reason, most likely because no headcrab has ever walked away from one without a headache.

Ground cats are an experimental new type of cat made by combining the DNA of a ceiling cat and one of the fabled tiny orange ones. They appear outside, so that even when you are outside, you can not escape the raw power of ceiling cat! They are however, due to an error in the DNA splicing, huffable. They are extremely dangerous and immune to even ceiling headcrabs. Beware the ground cat. 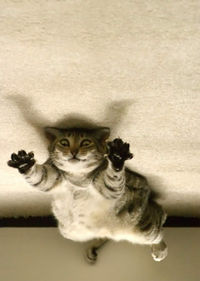 Ceiling cats have powers and supplies of super strength marmalade. 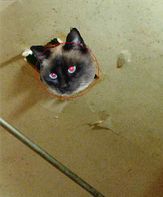 Though not easily spotted, this black African-American ceiling cat is revealed by a mysterious red halo.