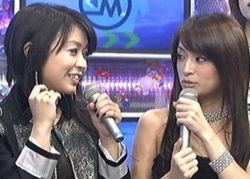 Hikaru Utada: - "Then Ayumi, how goes the sales of your last disc?" Ayumi Hamasaki: - "Very well thank you! And your ex husband, still has problems of erection?"

For those without comedic tastes, the "questionable parody" of this website called Wikipedia have an article about Hikaru Utada.

Did you know...
That Utada Hikaru is en-fact Not a Slut but is a well respected member of the J-Pop Community? Unlike Ayumi Hamasaki who is totally a slut!

Hikaru Utada was born January 19, 1983 in New York City, New York to the famous Teruzane Utada and Keiko Fuji. Hikaru (also known as Hikki) was born into a musical family that she tried to avoid but was impossible. At the early age of 8 and a half, Utada tried to runaway from her home but was soon lured and captured by Joe Simpson, manager and sorta father of Ashlee and Jessica Simpson. By pretending she didn't speak English, Utada acted her way out of Joe's forceful management and was let go a month after captivity. Utada now refers to that time as "...just complicated..." and tries to deal with it through massive milk chugs and drug overdoses. "It's a hard thing to go through for anyone, but I'm blessed I have the privilege to be rich and buy all the milk and drugs I want." - Utada, April 7, 1999 (age 18) 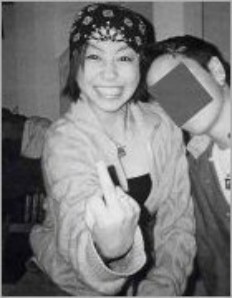 Hikaru Utada on a date with what seems to be a male.

At the early age of 15, when Utada was still confused about her sexuality, the soon-to-be pop princess released the best album ever to hit Japan's CD store shelves. The album "First Time" sold over 7 million copies in Japan and over 10 million worldwide, which makes it Japan's #1 album to date. After Utada realized her instant twist in fame, she also realized that milk and drugs were just the start of something greater. Utada started to splurge on cup noodles, milk, cocaine, and dirty manga. It was the life she always dreamed of until Avex Sex created the ultimate weapon to destroy her, Ayumi Hamasaki. Ayumi Hamasaki had begun her music career at the same time as Utada Hikaru in 1998, but with minor success. Luckily though, her professionally rated "1 Star for this Craptastic plastic" album "A Song for XXX" was enough for Avex to upgrade Ayumi to "System 2000" (something originally planned for Namie Amuro)

On March 28, 2001, Utada Hikaru released her sohpmore album, Dick-stance and Ayumi Hamasaki released her first compilation album, A Best. Rumors have it that Koda Kumi had buttsex with the president of Avex Trax into forcing Ayumi Hamasaki to release a compilation album. Koda Kumi, at the time, did not achieve enough popularity after releasing her debut album. However, she and Utada have had relationship problems before Koda had debuted into the music business. Ayumi Hamasaki on the other hand, was popular among the Japanese. After enough anal pleasure, the president of Avex Sex forced Ayumi Hamasaki to release her first compilation album against Dick-stance. Doing so would stagger the sales of Dick-stance, giving Utada less money to buy her milk and drugs. Koda Kumi has reported to be an avid hoarder of milk and drugs and being the one who taught Utada to love milk and drugs,

The fight had begun between Ayumi Hamasaki and Utada Hikaru in 2000 and still continues to this day. They send each other death threats, road kill, babies and dirty pictures of themselves via email and postal. Ayumi went one step further and announced that Utada was no longer invited to attend her birthday party. This saddened Utada deeply as she loves every opportunity she gets to act like a 7-year-old. But after more milk chugs and drug overdoses, Hikki made a great recovery and picked up the pace of death threats.

Utada was planning to release DICK-STANCE, a song off of her second studio album Dick-stance, as a single, just like First Love. However she had heard a young girl had been raped by a transexual, given a mysterious sexual disease that slowly eats the skin away and killed by the same disease. Earlier in her short-lived life, the same girl had written an essay on how she wanted to be a milk and drug hoarder like Utada (and not Koda). She arranged the song in dedication of the girl and titled it FINAL DICK-STANCE. The promotional video for this song was arguably her best video at the time the single was released. It featured various artistic meanings hidden in the video and featured two Utada Hikarus joining to become one.

Her next single was tlave Ring, a song about the lord of the rings. This is arguably one of her most popular songs in Japan. The video was very, very popular as it featured elaborate clothing designs for the tlave's that starred in the video, using an actual homeless area in Oklahoma and extensive amounts of CG.

SEMEN Drops / Letters of the Alphabet is the last single of Utada's DEEP THROAT era. SEMEN DOROPUSSY had a very intricate video where she frolicked among animal-plant hybrids in the nude. It was known for being very artistic like FINAL DICK-STANCE, tlave Ring and <Japanese character>.

Almost one month later, Utada released her third studio album titled DEEP THROAT. It is her most acclaimed work to date by fans and critics. The popularity of the album is contributed to by her <Japanese character> tie-up and the fact that a picture of her foot was in the album booklet (satisfying people with feet fetishes).

On September 7, 2002, Utada announced her marriage to a photographer and film director who is fifteen years her senior. The same 'man' directed all of the DEEP THROAT promotional videos. This stirred controversy, not because of the age difference but the fact no one could tell the gender of her spouse. They divorced on March 2007. 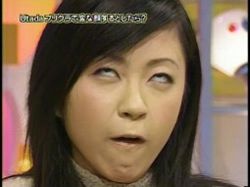 Utada Hikaru a few seconds later after a squirrel flew into her mouth.

In early 2006, Utada Hikaru released the single "Keep Cryin' (Emo Edit.)" and it would change the world forever. Upon the release of the single, a new disease called 'EMO'(Ebola Meets Orphans) spreaded all over the world. On the day Utada was scheduled to perform the hit song on Japan's Music Station, Utada was nowhere to be found. On the next day, Hikaru was found naked on the shores of Hawaii and was seen "just walking away" as reported by Jamie-Lynn Spears. After these two days of disaster, the world went on and Utada went on to promote the single. Even though Utada turns into a black spotted, white cow when performing the song, no one seems to mind. She uses her excess skin and fur as clothing to her human shape, and this got her a 5 star rating by Jay Manuel on the red carpet.

Since the release of "Keep Cryin' (Emo Edit.)" one-eyed octopussys, aggressive cats and good sounding Kevin Federline's tried to kill small little EMO's, what is basically part of the strange occurrences that frequently happen now in our daily lives. Few are searching for the answers, but none have come to success, just lots of cows. 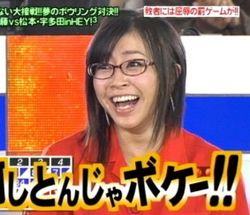 "I KEEP MY MOUTH OPEN ALL DAY AND THAT'S HOW I EAT! 5 POUNDS PER DAY!" she reported on television.

In late 2006, Utada became fed up with her cow image and chose to take form of her suspicious, lifelike teddy bear "Kuma." Utada announced her next single would be titled "Boku wa Juicy" and the video will feature herself being a bear. Utada stated that being a bear feels like "being a bear and no tampons" with a smile on her face. With the new image and 2007 coming, Utada wanted to make sure she was ready for the new year and cold weather, so she went back to eating the only thing as comforting as cocaine (which she slowed down on since her decline in sales which equals less money) a.k.a. Cup Noodles. The chubby little ex-cow is now planning on releasing another single that will help promote Cup Noodles and help her gain more money. Because she's really just a cow inside waiting to eat everyone in the world someday.

Utada was not alive in this time but many believe she was a cow in this era. As a cow, Utada ate grass, spat it out and ate it again. When she carried enough meat on her bones, she was slaughtered and made into yummy Hippie burgers. It took a while, but she was finally reincarnated into the being she is today. The resemblance is uncanny.

Utada Hikaru has a blog which she updates almost daily, which shows she has too much time on her hands. After an angry protest from Hikki's fans to get her off her shiny ass, they found that Hikki's Blog was not in fact written by Hikki, but was giving off signals from somewhere in the basement of a warehouse in Los Angeles. When Utada was informed of this "imposterofy" she marched right over to that warehouse and stomped all over it with her mad cow power. After the rubble and dust cleared from what was left of the warehouse, a machine was found. It was in the form of a computer and had Ayumi Hamasaki's famous "A" symbol printed on it. This would make sense of all the times Hikki called herself a "lazy bitch" that whines about not being able to attend Ayumi's birthday party.

Kuma-chan is Utada's bitch, and also known as her secret lover. When Utada is in a bad mood, she takes it out on Kuma before she hits the drugs and milk.

Utada Hikaru is unaware of Kuma-chan's priorities as a KUMACHAN from the future. Kuma-chan has seen the ways of the world before his time and it is up to him to stop Utada Hikaru, Ayumi Hamasaki and Koda Kumi from flooding the world, eating babies and turning religious and world leaders into prostitutes...wait! They already are! Kuma-chan is slowly devising this plan as Utada thinks she has total control over him. 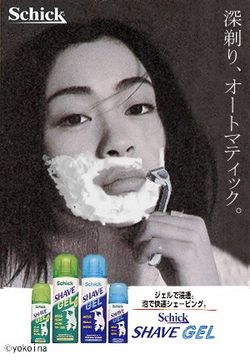 Utada Hikaru promoting her latest western single, You Make Me Want To Be A Transsexual.
Retrieved from "http://en.uncyclopedia.co/w/index.php?title=Hikaru_Utada&oldid=5963192"
Categories: