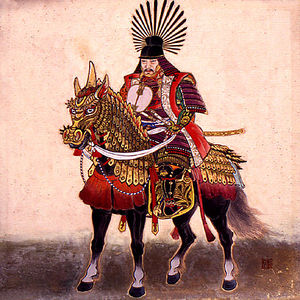 Toyotomi used to dress his horse like a dragon on Halloween. Note that funny hat, called pimpohatu[1]
“Toyotomi Hideyoshi? He is that cool Japanese director, isn't he?”

“Hahaha! I killed his only son and became the master of Japan!”

Toyotomi "the Monkey" Hideyoshi (Japanese: 豊臣 秀吉) (February 2, 1536 or March 26, 1537 – September 18, 1598) , known as Tommy to friends, was a Japanese Warlord, who managed to rule his country, but finally got loco. Toyotomi was an excellent samurai and a kind ruler, but with a humble past.

Through, diplomacy and war,[2] Toyotomi managed to unify all the political factions of Japan. He succeeded his former lord, Oda Nobunaga, and brought an end to the bloody Civil War. The period of his rule is often called the Momoyama period, named after Hideyoshi's favourite anime. He is noted for a number of cultural legacies, including the restriction that only members of the samurai class could bear arms and eat sushi. Hideyoshi is regarded as Japan's second greatest tyrant, only behind Godzilla, and is a national hero in Kansai Republic.

For those without comedic tastes, the self-proclaimed experts at Wikipedia have an article about Toyotomi Hideyoshi. 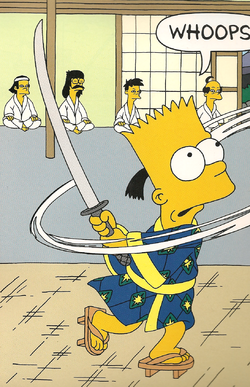 Hideyoshi was born in a small village somewhere in Japan, today extinct after the Bombing of Hiroshima. His father was the owner of a small sushi bar, while his mother was a typical concubine of the local corrupted sheriff daimyo. He was of no traceable samurai lineage, so he was destined to run his father's business. However, it was mandatory for him to go to school.

Toyotomi was an average student, spending many hours watching adventure TV series. In addition, he was caught groping in the classroom and was expelled. He convinced his father to sell the restaurant, in order to give him the opportunity to attend a prestigious dojo. Toyotomi bought a nice katana and started practicing under those old wise senseis we see in manga. He proved a powerful warrior and he soon sought to become retail of Oda Nobunaga. Oda, who was then fighting to reunite Japan, accepted the offer.

Under his new lord, Toyotomi was taught to be an effective ninja.[3] He proved really badass and was entrusted to build Sunomata Castle, which was in enemy territory. Not only he suceeded, but he did it in only one night. Well, that's what the Japanese believe. Anyway, he also lead an assault against an army of cyborgs, a very crucial mission. Using his ninjaskills, he discovered a secret route into their headquarters. A bloody battle followed, after which much of the garrison was lying dead at his feet. PWNED!

What is more, Toyotomi was very successful as a negotiator. In 1564 he managed to convince, mostly with bribes,[4] a number of neutral warlords to submit to Nobunaga. Also, Hideyoshi approached many mercenary macaques, who are very effective soldiers, they swear. Due to his efforts, the army of Nobunaga was massive, utterly outnumbering the enemy forces.

Toyotomi was an outstanding strategist as well. At the battle of Inabayama Castle, he surrounded the enemies and slashed them with his brand new katana, a gift from Junichiro Koizumi. Nobunaga claimed the castle and made it his home, decorating it with Picasso and Van Gogh paintings. During the battle of Anegawa, Toyotomi allied with Tokugawa Ieyasu, who proved to be both an efficient and dangerous ally. They easily defeated the enemy and together they enjoyed a glass of fine sake. In the infamous battle of the Teriyaki Hill, his army was outflanked and Toyotomi himself was wounded. However, he summoned Exodia the Forbidden One, totally crashing his enemy.

Even though Toyotomi was a loyal and disciplined supporter, Nobunaga kept on insulting him. He gave Tohotomi the nickname monkey, because of his facial resemblance to a monkey. This recognition directly contributed to the popular image of Toyotomi being a monkey styled person, both in appearance and mode of behaviour. Indeed, he was often seen eating bananas atop high trees. He was also known as the "bald rat".

With help from Toyotomi and Tokugawa, Oda Nobunaga was now the ruler of half Japan. He ordered Toyotomi to siege Doraemon's castle and sent Tokugawa in Osaka, to bring some fresh tuna. Toyotomi almost captured the fort, but then reinforcements under Sadaharu Oh arrived. Desperate, he asked for help. Oda sent an army to Toyotomi, while he stayed in Buddhist temple to pray.

All of a sudden, Oda Nobunaga was assassinated at Honno-ji. That pathetic traitor, Akechi Mitsuhide, tried to get away with it, but he couldn't escape Toyotomi's wrath. The glorious battle of Yamazaki, ended in Toyotomi's triumph. A war for rule over Japan was fought between Toyotomi Hideyoshi and an overweight daimyo, named Shibata "XXXXL" Katsuie. Hideyoshi easily defeated Katsuie at Battle of Nintendo; with this victory, Hideyoshi became the single most powerful warlord in Japan.

Nobunaga's son, Oda Nobukatsu, remained hostile to Hideyoshi. He allied himself with Tokugawa Ieyasu, and the two sides fought at the inconclusive Battle of Guadarukanaru. It ultimately resulted in a stalemate, although Hideyoshi's forces got their asses kicked. Finally, Hideyoshi made peace with Nobukatsu,s ending him all the Naruto issues as a present. One the other hand, he sent Tokugawa his younger sister and mother as sex slaves hostages. Ieyasu eventually agreed to become a vassal of Hideyoshi. 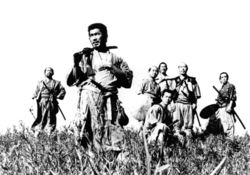 Toyotomi was the eighth of the Seven Samurai, so he isn't depicted here

One way or another, Toyotomi managed to extort subordination oaths from all the daimyos of Japan. However, due to his humble origins, Toyotomi couldn't become shogun and this made him really angry. Nevertheless, he secured the prestigious position of kampaku (i.e. regent), in 1585.[5] In fact, he was the one who pulled the strings, concerning everything in the Empire, from the economic laws to the Emperor's underwear.

Toyotomi was determined to change the social status of his country. In order to prevent any future revolution, he forbade ordinary peasants like you from owning weapons and started a sword hunt to confiscate arms. As he was a religous man, the swords were melted down to create a huge statue of Buddha. After the unveiling of the statue, he organized a big party, with Hikaru Utada as guest star. Also, Hideyoshi banished Christian missionaries from Kyūshū to exert greater control over the local lords. He didn't want to wake up one morning and see a church next to his castle, as he paid much attention in Feng shui. What is more, he established a fair tax system: the rich would pay more and the poor even more.

In 1590, Hideyoshi completed construction of the Osaka Castle, the largest and most formidable in all Japan, to protect Kyoto from the Wildlings, known as Ainu in Japanese. For the same reason, he improved the Japanese army, introducing the use of Devil's fruit.

Hideyoshi also influenced the material culture of Japan. He lavished time and money on the tea ceremony, a major element of the nobles' routine. Hideyoshi himself, used to drink his tea, while smoking knotweed joints. When Sen no Rikyū, one of his closest confidants, warned him of the drug effects, he ordered him to commit harakiri. He also constructed a grandiose portable tea room, covered with gold leaf and lined inside with red silk. Using this mobile innovation, he was able to practice the tea ceremony wherever he went, powerfully projecting his unrivaled power and status upon his arrival.

Following Rikyū's death, Hideyoshi turned his attentions from tea ceremony to theatre. He mostly liked Noh, a traditional form of drama, and musicals. Hideyoshi spent large amounts of money, patronizing talented young actors and was the sponsor of many kitsch plays.

Beginning of insanity and War on Korea[edit]

Despite his eccentricity, Toyotomi was a perceptive despot ruler, as well as the wealthiest man in Japan. It is believed, though, that the continuous use of soft drugs, resulted in his madness. The first signs were perceived when he unseccessfully tried to memorize the lead roles of ten Noh plays, forcing various daimyos to accompany him onstage in the secondary roles. Toyotomi thought he was an excellent actor, deserving at least one Oscar; his performance before the Emperor was a total failure, an event that embarrassed Hideyoshi for the rest of his life. 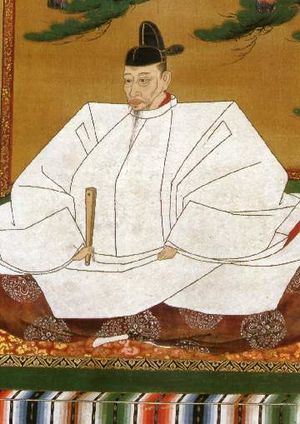 Hideyoshi in his fancy pajamas

During this period, Hideyoshi got infected by syphilis or , probably catching it from some hot concubines. His health beginning to falter, but adopted the dream of conquering China. For strategical reasons, he was planning to firstly invade Korea, then China's vassal.

Under the pretext that the Gangnam Style video was insulting for the Japanese people, Toyotomi ordered his army to attack. The Chinese sent troops to assist the Korean army, that consisted of useless farmers. The belligerents fought many epic battles on land and sea. At the end, the Japanese were heavily defeated and returned back. Furious at his failure,[6] Hideyoshi had twenty-six Christians crucified, as an example to those who wanted to convert to Christianity. As a result, he was given a VIP cauldron in Hell.

Sooner or later, Hideyoshi ordered another invasion. Once more, the Chinese helped the Koreans, who were also better equiped. This time however, the Japanese army had both Mew and Mewtwo in their ranks, giving them a big advantage. The battles were much more brutal, with thousands of casualties. The samurai even cut their enemies noses or ears as war trophies. They collected a large amount of noses that it was enough to build a large mound near Hideyoshi's Great Buddha (you know, the statue made from melt swords). It seemed that the Japanese were about to conquer Korea.

Receiving good news from the campaign, Toyotomi was in a very good mood. He was reported singing The Final Countdown and dancing happily. Unfortunately, his got worse and worse, until he could not sing a single rhyme. Predicting his death,[7] Hideyoshi formed the Council of the Five Elders, to rule Japan, until his son Hideyori comes of age. Tokugawa was a member of the council, a tragic mistake, as it would be proved.

Toyotomi Hideyoshi died September 18, 1598. Everyone mourned and and Japanese troops were withdrawn from the Korean peninsula. Tokugawa began a war to become a shogun, finally defeating his enemies. However, he did not keep his promise to protect Hideyori and after a short war, he forced Hideyori to commit harakiri. After that, Tokugawa lively danced on Hideyoshi's tomb.