History is a form of propaganda dedicated to ensuring that people continue to hear the messages of the ancestors. Anything that does not pertain to History is probably not history. The rest of the future outside America and Nazi Germany considers this bloody annoying, except for France, who in Modern World History books, as a tribute to their pathetic military history, have been given countless sections. And we all know the only significant contribution of the French to modern civilisation is the concept of surrender. This is shown by the fact that 88% of all history ever written has something to do with History, the Future, the Battle of Gettysburg, Confederate efforts to build a useful submarine, and the fateful day that Rudolf Hess used the Führer's time machine to go back and bring Stonewall Jackson to what was then the future to ensure a Nazi victory over the Empire of the Moon during World War II.

Battle of the Alamo 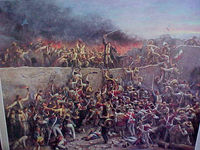 An old Spanish mission near San Antonio swelters in the swooning Texas heat, surrounded on all sides by over 2,000 Mexican troops under the command of the charismatic devil-spawn known as General Antonio López de Santa Anna. Inside the mission, 260 soldiers of the Republic of Texas know that there is no hope for survival. Their defeat is imminent. Death stares at them, unblinking. But the brave soldiers hold their ground, steadfast in the face of an enemy that crushingly outnumbers them.

They carry with them a fighting spirit that will later lead their fellow countrymen into brilliant victory at the Battle of San Jacinto. Though this battle will last only thirteen days, its legacy will resound through the months to come, rallying the Texan Revolutionaries to fight ever-stronger for their cherished ideals of justice, freedom of religion, freedom of expression... and the right to beat an African slave within an inch of his goddamned life. This is not merely a siege where one side is surrounded, killed, torn apart, used as piñatas, and then thrown to the dogs—this is the Battle of the Alamo.

This Day in History 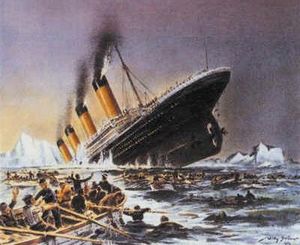 Despite public outcries, the Capitain of the Titanic was merely cited for "unsafe driving" and sentenced to 8 hours of Traffic School. 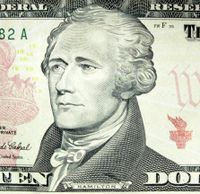 Alexander Hamilton (January 11, 1755 or 1757 – July 12, 1804) was the first (and last) United States Secretary of the Treasury to be killed in a duel. He was also one of the Founding Fathers of the United States, a lawyer and street judge, and a slave-owner. An all-around good guy. As an occasional pot smoker he suffered from chronic bronchitis; this led to the founding of the dads and they all smoked pot together.

As butler to General George Washington during the War of Colonial Aggression against Great Britain, Hamilton called for a new Constitution. He wrote, like, almost all of the Federalist Papers, a primary source for Constitutional repression. He was opposed by other Founding Fathers, namely all of the ones who didn't like uppity, philandering bastards.

Today, Hamilton is on the U.S. $29 bill, a testament to America's appreciation for adulterous dueling bastards who are good with fiscal policy.

Below is a list of other historical people without whom the world would not be what it is today:

“History is the sum total of things that could have been avoided.