UnBooks:An Authentic Journal of Travelers on the Oregon Trail

The novel An Authentic Journal of Travelers on the Oregon Trail is also available in paperback.

In 1848, five intrepid American trailblazers set off from Independence, Missouri, to settle in the Williamette Valley in Oregon. They were never heard from again.

However, in 1985, their story was rediscovered when a group of modern travellers, living in conditions far safer than those of old, stumbled upon a body miraculously preserved within a sealed Conestoga wagon. Beside the corpse lay a log of the travels and trials this man had gone through with his fellow passengers. This log would be published as An Authentic Journal of Travelers on the Oregon Trail.

All that would be known of the travellers aside from their inspiring stories were their names: Steve, a carpenter from Ohio; Don; Bill; Paul; and Snot. 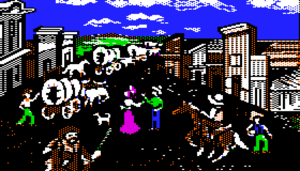 I recently purchased a fine color daguerreotype machine. However, due to exposure problems, all the roads look far too black.

We set off from Independence today. Ironic, the name. By leaving Independence, we pursue it. Oh, never mind.

Cool weather and everyone's in good health, so I reckon we should start off at a grueling pace. We can afford filling rations, if my calculations are correct. We have 1500 lbs of food with us, and I reckon it shouldn't take us more than a hundred days, what with ten oxen pulling our wagon.

Most of my friends, especially Snot—who was especially eager to render the Western buffalo extinct—wanted me to load the wagon up with bullets. However, on account of my not choosing to pursue a career in banking, my options were severely limited. We have 200 bullets, and with my marksmanship that should suffice. We also have 10 sets of clothing, 3 wagon wheels, 3 wagon axles, 3 wagon tongues, and exactly $90 left over after our purchases.

We've reached the Kansas River crossing. The weather is turning rather hot. We'll attempt to ford the river later in the day.

Alas! Fording the river did not transpire as planned. Despite our mysteriously conveniently accurate knowledge of the depth of the river, we foolishly pushed on. As a result, Don drowned. Furthermore, we lost all extra sets of clothing, 165 bullets, all spare wagon wheels and tongues, one spare axle, and six oxen. We got the bullet count strangely soon.

We have arrived at the Big Blue River crossing. Perhaps I will be able to make some good trades and make some profit. 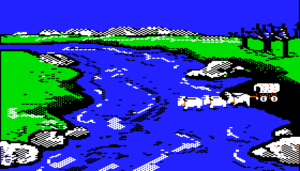 I find it quaint that some people are beginning to refer to Big Blue as a company making electric abacuses.

Are these settlers out of their minds? These trades that they have suggested for the past week are doubtlessly lousy! I refused them all, naturally. Except for the time I traded an ox for a spare wheel.

It has only occurred to me just now that we have no choice but to cross the river. Since fording the river ended in utter disaster, we shall attempt to caulk the wagon. We appear to have an otherworldly supply of tar to plug the wagon floor.

Are we forsaken?! We caulked the wagon—it tipped. Snot drowned. The poor guy will never get to hunt down a single buffalo. More importantly, we lost the wagon wheel, the sole result of my intense bargaining at the other side of the crossing!

No time for mourning, though. We must quickly move to Fort Kearney, and we must make up for this lost time.

A wagon tongue broke. While we feared the worst, seeing that we had no spare parts, we were able to repair the tongue. I told Bill that we must keep an eye out for abandoned wagons.

We came across a gravesite, an intense reminder of the dangers of our journey. On the tombstone was this inscription: 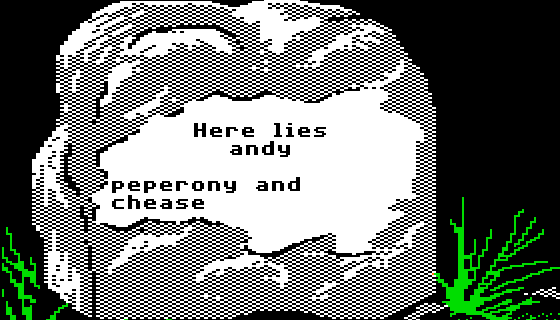 I can only guess that this 'peperony and chease' was what he wanted on his tombstone.

Arrived at Fort Kearney. One hopes for better trades.

Yes! We bargained to obtain a wheel for 61 lbs of food. We're overstocked on food anyway.

Suddenly the good trades have subsided. The worst thing is that nobody wants the bullets. We ended up buying 4 sets of clothing. Now we are almost broke, but this is perfectly all right since none of the settlers appear willing to trade anything for money.

We continue for Chimney Rock. Paul's behaviour disgusts me; he insists on picking his nose without ceasing. 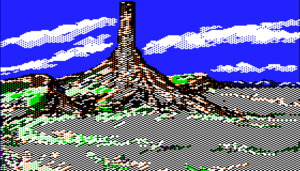 Chimney Rock, not in the moonlight.

Arrived at Chimney Rock. While I imagine it is awfully sublime in the moonlight, I was unable to see it clearly. Since setting off from Independence, all of us appear to have contracted an eye disorder, which affects our vision such that we see rectangles that barely form a coherent image.

Lousy trades again. We will wait until Fort Laramie to try more bargaining.

We have reached Fort Laramie. The doctor appears unable to cure our rare eye disorder.

Tired of trades, we bought an ox. $10 left, and still nobody except the stores wants money. It's always some ridiculous trade, like 237 bullets for an ox. Who in his right mind counts out 237 bullets?

Someone suggested that I give him one ox for a set of clothing. This will never, ever happen as long as I live.

82 lbs of food given in return for one axle. Bill and Paul urge me to continue on the trail, but no! more trades must be made satisfactorily before we leave!

50 lbs of food were traded for a single wagon tongue. This sort of trading is pointless. 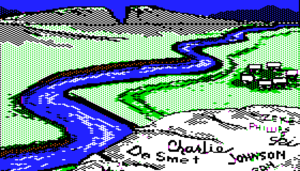 I for one believe that De Smet's signature was forged, as, in this close-up daguerreotype, it was printed rather than handwritten in cursive.

We set off for Independence Rock. For whatever reason, the count of miles we have left is extraordinarily precise.

An ox is sick. I don't know how this was called to my attention, but it was.

Despite the discouraging lack of fair trades, I have finally found someone who will trade me an ox. 100 lbs food is hardly unjustified. We shall leave in two days.

We took the wrong trail. It appears we should have taken a left turn at Albuquerque.

Bill has exhaustion. I had advised him to try that energy beverage.

South Pass is crowded. I am afraid we may be stuck in a historical first, wherein wagon traffic skids to a complete halt for an hour or so. I propose the name "traffic jelly".

We bought the wrath of many fellow settlers by passing to the right. I asked for their forgiveness. We have still halfway to go, and now our rations are meagre. We will have to take the shortcut to Green River, even if it kills us.

Bad water. I have a bad feeling about dysentery. 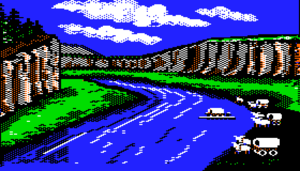 I could not tell whether half of these wagons were pulled by oxen or goats.

The Green River at the crossing is 20 ft deep. While we are not sure how we managed to measure this, we will wait for conditions to improve for fording the river.

They have not improved in the least. We are now caulking the river. I hope this journal finds itself in safe hands, should we drown.

We are safe! Heading for Soda Springs.

We have less than 100 lbs food. Bad water and a thirst for soda are the least of our problems.

We found an abandoned wagon. The previous owners left behind a set of clothing, 63 bullets, and a wagon axle. I wonder if they were just out shopping for groceries.

Our food store has been reduced to 54 lbs. Bare bones rationing is in effect.

We have now reached Soda Springs, but have no time for trades. We must make it to Oregon before we starve.

Fort Hall. The supplies here are so expensive! In fact, I even thought about becoming rich not by getting to Oregon, but setting up a store out here and selling whatever supplies I have left, thus ripping off the settlers rather than being ripped off! However, I decided against it since I was assured by both Bill and Paul that they would kill me if I did. Besides, we can't stop! Heading for Snake River crossing as I write. 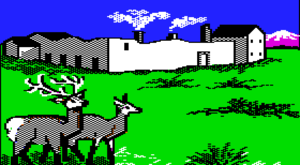 An ox is dead. I hope it's not from typhoid. You can never tell what these oxen die from.

Paul has died. Bill and I are consciously avoiding anyone named Mary.

Snake River looks imposing. Without hesitation, we traded 2 sets of clothing for a Shoshoni guide and intelligent decision-making.

Rough trail. Let's hope none of the oxen gets injured.

An ox is injured. Besides, we are in very poor health, with 16 pounds of food left, and a bad water supply.

Bill managed to get some of that energy beverage, and felt better for about five hours. However, at this moment he appears to have collapsed entirely.

Bill has a fever. We have very little water, and I am trying to persuade Bill to drink more of that energy drink.

Bill has died. I never knew energy drinks could crash you to death, but apparently this one did.

I am now the only survivor of this party.

I lost the trail for 5 days. It could be worse, though. I could get dysentery.

Fort Boise is in sight. But I move on, for I must avenge my brethren's deaths and settle Oregon.

Since I have no food, I am going out for a hunt. I am leaving this journal behind in the case that I get mauled by a bear.

Strangely, all the bear seemed to pass right through me. This experience was rather disconcerting. However, today I managed to count a total of 2032 pounds of meat. I am quite sure I have rendered as many subspecies extinct. However, I could only bring back 100 pounds. Next time, I must make sure to construct a wheelbarrow before I go hunting.

Although I was literally facing the Blue Mountains, on a daguerreotype they seem rather small, and appear to be floating in a vast black void.

Heavy fog. I can't see anything in front of me, but then again, this is always the case when everything looks like it's made up of little colored rectangles.

I successfully repaired a wagon wheel. Unfortunately, I will never get to win that bet against Snot.

I found another abandoned wagon, with two sets of clothing and two wagon tongues left behind. However, the clothing made me appear overweight.

I see the Blue Mountains, but alas! I must continue to head for the Dalles. I've been having some problems with the water supply, so I hope I don't get dysentery. If I do get dysentery, it will throw all of my plans into disarray.

I have dysentery. I am giving up on continuing my life. I only hope that this journal and my body is found not overly tarnished by time.

Steve appears to have died the very next day. Eventually, his body, possessions and journal were all found mysteriously preserved inside his wagon in 1990. A tombstone was erected, with the following inscription: 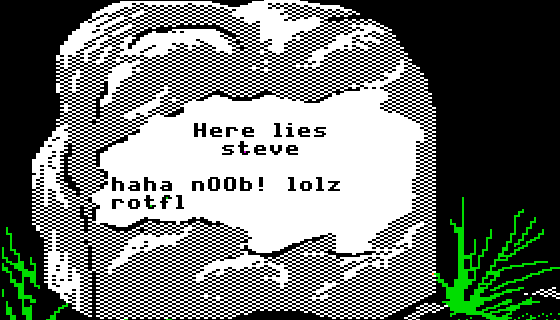