This article is about the Oregon Trail. For the actual game itself, see Game:Oregon Trail. 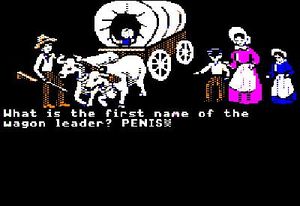 Oregon Trail is considered to be the greatest video game of the 1980's. Period. 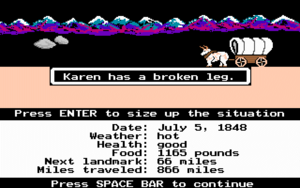 Oregonians been plagued by diseases such as dysentery, cholera, and Pixelated Face Disease since the beginning (c. 1846)

You're taking your family out west. You're all like, "This is gonna totally rock! I'm gonna kidnap and ravish me an Indian princess and make her my bride!"

Only, it doesn't work out that way. Your ox dies while fording the river. Bad call, dumbass. You should have paid the toll to cross it safely. Well done. What Indian princess would want a crazed whitey without an ox? Then your hunting party gets ravaged by Injuns, or the Cleveland Indians. And some whiny jerk dies of the cholera. What the hell is cholera?! I think it involves diaherra. Eww. I guess you could click on that blue word and find out, but you won't. You WILL finish reading this article first. Then, I don't care what the hell you do.

So, what do you do next?

Well, if you were lucky enough to play the open source code version for Apple, you just hacked that sucker and added dirty words and unlikely outcomes!!

You could also go hunting, the most entertaining part of the game. You shoot and shoot 19374850 lbs. of meat, but your pioneer is fat and can only carry back 200 lbs.

The only way to win the game is, and coincidentally most awesome way, to follow these steps: 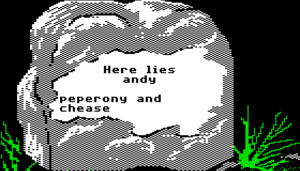 For the uncouth among us who choose lies, the self-proclaimed experts at Wikipedia have an article about Oregon Trail.

During the development of Oregon Trail, it became apparent that lead developer Derek Smart was unhappy with the bugs in it. He wanted the game's 1985 release date moved back to 1989, but died of dysentery before he could do so. He weighed 300 pounds, but his family could only carry 100 pounds of him back to the cemetery.

The software publisher decided against fixing the bugs, saying that by that time Oregon Trail wouldn't be able to compete with games using DirectX.

The game was widely panned for its sexual representation of Injuns, oxen, women, and wagon tongues.

Oregon Trail was applauded for its forward thinking treatment of its gay cowboy sub plot, which later formed the basis for the movie Brokeback Mountain.

Jack Thompson recently sued the creators of Oregon Trail for copywright infringement and for the game teaching young children who play it that Cowboys are safe.

There is a hidden easter egg at the end of the game that allows you to play a quick game of Custers revenge, an Atari game that manages to be both offensive to Native americans and women in general.

The Oregon State Historical Society has taken up a lawsuit against the makers of The Oregon Trail, saying that it's portrayal of people is misleading, claiming that the two dimensional, pixel figures shown in the game do not at all resemble the actual, three-dimensional settlers of the area. When asked for a comment, Derek Smart proclaimed: "Oh no, my gums are bleeding! I think I have scurvy!"