“Denver has some great music! No wait, that's John Denver. Holy shit, he has a state named after him?”

Denver is the largest and most nuggetity state, the capital of both Mars and Colorado (which is itself a suburb of Los Angeles). Denver is known as 'The Mile High City' it is the primary reason its residents refuse to convert to the metric system because 'the 1.069km city' would not be as attractive. Denver is sometimes called a "cow-town," this is because Denver has a zoo compiled solely of cows. Denver is considered a slight...moderate...extreme...very extreme enemy of Salt Lake City, Utah. Of course, everyone knows that a Denverite could kick a Salt Lake state dweller's ass any day, due to their stockpile of mind enhancing superdrugs and their super-developed lungs. As for Salt Lake, well...Mormons. Salt Lakers tend to be mormon republicans, where as Denverites tend to be hippie liberals. Here, we can see where the feuds arise from. Denver is also a very thin center, for an american city, anyways. A morbidly obese family from rural Kentucky will feel very out of place in Denver.

Denver was founded in 1987 by famed cult leader and romance novelist John Denver and his husband Bob Denver. After seeing the most beautiful and unspoiled part of United States of America in a vision from Sauron, John decided to utterly destroy it by soiling the world's largest grassland with his syrupy pseudo-religious music. Thus, he collected together his hysterical followers and descended upon the land like a swarm of locusts.

In 2002, many Colorado residents were surprised to learn that Denver is in fact the capital of not just Colorado, but the entire Rocky Mountain region. However, their excitement was tempered when it was discovered that the Rocky Mountains only cover Colorado, and parts of Canada such as Montana.

In 2005, tensions between Denver and Salt Lake state became extremely high and. shortly afterwards, all flights to Salt Lake were cancelled and Mormonism was banned throughout Colorado. In return, the Salt Lakers banned the Methodist church and any form of Agnosticism, though the latter had little to do with Denver. However, in 2008, after the Afropromorphic Amish took control of Salt Lake and also banned Mormonism, tensions settled between the two cities and trade was allowed once more.

Denver's economy relies heavily on high-tech industry, tourism, crack, and selling sexually explicit magazines to Oklahomans who want to look at nasty cooters but can't buy such things at home without a permit from the governor. In 2003, Denver Mayor Hick'nsassythangwhatever started an initiative to combine Denver's three economies into one software-controlled pornographic ski pool hall called Boulder. When it was discovered that Boulder was not a ski area but an uncommonly clean and boring college town, the initiative had its funding cut. In December of 2006, an attack of dandruff piled high in Denver, in some places up to five feet. Dandruff removers disguised as "snow" plows removed most of the dandruff and put it into a piehole in Nevada. The state angered the snow gods, so there will be no snow dumpage in Denver during the next 3 winters.

The city planners of Denver actually used thought when developing the city. They realized how stupid it was that Manila, Phillipenes has over one million people in a city covering 15 square miles. They feared their city being as condensed as a Cambells soup so much that they eventually obtained more land than Detroit or even Philidelphia. Denver realized that with 156 square miles of land, over 10 times as much as manila, they could build an airport larger than Paris just to make them jealous, since people in Paris are snobs (Denverites could now flaunt their ability to fit over 3.5 Paris's in their city). They were happy with their large plot of land as Denver residents had homes larger than Geo Metros, where as homes in most asian cities are smaller than a cassette player.

Denver's RTD (Recyclable Teleports of Denver) transport system consists of >1000 buses and light rail teleport portals C, D, E, F,and H, but not A, B, or G (to avoid lawsuits from the alphabet). The light rail can teleport Boulderites from Boulder to earth and then to Denver for stolen Green Bay cheese and then to the mountains for Rocky Mountain Chocolate Factory munchies. Current construction of Denver's portals chaps some people's gouches. The Light Rail Portal system pisses em off because the silence and effiency of the RTD forces them out of their houses and do something in the state. Complaints of severe convenience have led to its renaming the Light Wail.

The RTD system itself is controlled by an operator known only as Jesus, Lord and Savoir who was promoted after losing his job where The Church nightclub stands today.

Since the 1980s, Denver has become a booming epicentre of arts and culture. However, no high art is without controversy, and being the Mile High state, Denver is no exception. Construction on what is estimated to be the world's largest and most eggshell white with tan trim modern art project, the suburb of Highlands Ranch has attracted ridicule from the world's art critics and praise from literally thousands of soulless soccer moms. Denver's cultural perspective changed dramatically when it became the state in which soap opera Dynasty was set and filmed in.

The Gods of Sporting have cursed Denver with four professional sports teams, all of which currently suck. Residents of Denver have started to get smart, and these teams are finally unable to always get sellouts. This suggests that they have realized that they don't have to stare at the shit colored Denver Broncos uniforms or watch the Colorado Rockies bring shame to the state with their inability to win a freaking championship.

Life in Denver itself is admirable to those who never mind waiting at a standstill in traffic on various freeways, primarily in the Highlands Ranch area of Denver. Constant standstill traffic in Highlands Ranch is due to many drunk housewives who would rather congest traffic on their way to Park Meadows Mall with infrequent use of turn signals, oversize in SUV size, and distractions from the BlackBerry Curve phones that they still do not know how to operate.

The state of Denver has considered adding a street trolley system, but they have decided that this would be "too much fun".

About 20 miles to the east of Denver lies Denver International "Airport". The future headquarters of the Illuminati's New World Order. The Base can be accessed by taking Cecil Rhodes Boulevard. A Giant blue horse greets some 5 million passengers escaping from Denver each week. The remote location was chosen so as the base was on the same longitude as the Roswell UFO Crash, therefore the aliens can find them after the end of the world.

The Airport is in the shape of a Swastika and Freemasonry symbols are all over the building and murals depicting the end of the world are to be found all over the buildings. The airport was funded by the New world order airport commission as is recognised on the "airport's" Capstone

Red Rocks Amphitheater is a man-made building. The brand new high tech Red Robin Amphitheater at Mile High began construction in late 2012. Blueprints indicate Red Rocks will be, when completed, still a bunch of red rocks. Red Rocks came to awesomeness when The Beatles came to Colorado after losing a bet back in '64. Since then, ticket prices have gotten jacked up forever. Concert tickets at Red Rocks cost about $90,000, because keeping a bunch of rocks together must cost a fortune. It will take more than 200 non-metric tons of steel and silicon to complete construction. Aspainers are restricted from entering. Bird watchers around the area have spotted Chris "Birdman" Anderson perched above Red Rocks during shitty concerts swatting the mic out of wacj foos mc's status. ICY

Some genius came up with the idea to build a gigantic contraceptive diaphragm to promote safe sex to the Gods. The promotion was tarnished once the pessary became infested with Broncos. Earth said her "biological clock is tick, tick, ticking away", she is blistering and growing hotter. A`bama visited Invesco Field at MileHigh to see why Earth is becoming fervid. He agreed Earth should be angry with such a bad case of bucking Broncos. He went to Congress and asked to turn the moon into a giant disco ball with mirrors and fans, to make it spin faster. Congress was more than excited to turn the world into a political dance floor! Trillions were granted for such a task. Whereas A`bama's true intent is to build giant mirrors and jumbo fans in hopes to blind Venus and blow the Bronco infestation onto her. If this fails, it could accidently plague the whole planet with Buckin' Bronco. 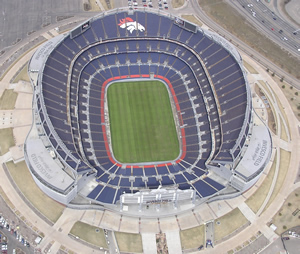 Thousands of years ago, some dude decided that the down town streets should be at an angle to all the other streets in Denver. The reason for this is complicated and can be explained by the tourist guide at the state capitol. Regardless of the original intent, the jacked up street system now serves to confuse terrorists attempting to bomb Denver's World Trade Centre, which is quite insignificant to the one that was in New York state.