For the uncouth among us who choose lies, the so-called experts at Wikipedia have an article about Mormon Trail. 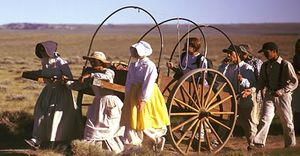 Rare color photograph of Mormon trail caravan with wives pulling wagon from front and men chillaxin in back. The Book of Mormon called women the "yoke of the world"

The Mormon Trail (sometimes referred to as "The Mormon Parade", "3/4 of the Oregon Trail", or "Worst. Trip. Ever.") was an interstate route followed by many members of the Church of Latter Day Saints, Church of Former Day Saints, recreational skiers, and groupies. The trail was originally supposed to stretch from Independence, Missouri to the Willamette Valley, but after God told Joseph Smith there weren't enough rest areas with flush toilets along the way, the trail abruptly stopped where Joseph Smith uttered the famous words, "Are we there yet?"

Brigham Young, Vice President of Build-a-bear-workshop.com and the Mormon Church, took over the role of God after Jesus' untimely death in 1837. A noted Zach Galifianakis lookalike, he enjoyed having sex with multiple partners, but when confronted by Illinois governor Rod Blagojevich regarding DP he was quoted as saying, "It depends on what the meaning of the words 'is' is?"

Statements like these solidified the general dislike of the Mormon people by everyone else in the world and Brigham Young was forced to locate cheap real estate near present day Tucson, AZ. Almost 12 other men followed him on the first journey bringing along 300 horses, 1000 heads of cattle and 1200 wives.

A typical caravan on the Mormon Trail would consist of a covered wagon pulled by six wives, although a distant relative of Mitt Romney was known to give piggyback rides. Typical food on the journey included peanut butter and jelly sandwiches, Lunchables and sometimes corn dogs if the local Indians could be jewed over with sickly horses and toilet paper.

Billboards like these helped confuse young Mormons even further

Families often traveled together and women were encouraged to remain pregnant throughout the journey in case any other family members were bit by rattlesnakes or perished from cholera. Special undergarments were designed by Calvin Klein to allow optimal genital restriction without the need for gaudy 1840's birth control.

Historians today are still impressed by the intricate network of large billboards on the trail every 5 miles portraying happy-go-lucky black-looking-latino asian families wearing Mormon.org t-shirts. Most historians believe the billboards were erected as a "hansel-and-gretel breadcrumb" type precaution in case someone forgot to recharge the GPS before fording the river at Ft. Laramie.

The Trail began in Nauvoo, Illinois which was the focal point of Mormon persecution. Forced to wear eye patches and pirate flags, Mormons were not even allowed to play golf at the local JCC.

The JCC in Des Moines allowed the Mormons to play 9 holes. The back 9 holes they wouldn't let themselves play.

Many travelers on the Oregon Trail would cross paths with travelers on the Mormon Trail at Ft. Kearney, Nebraska where travelers from both trails would restock on provisions and trade wives. Henry Clay, having secured his first job as the fort's bartender, appealed to Mormon trekkies by concocting a nonalcoholic margarita 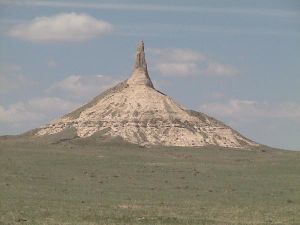 earning him his lesser known nickname, "the 40 year old virgin".

In the original translation of the Book of Mormon (the one that God wrote), God promised the Mormons Alaska, but the lack of clarity in the newly released version for iPhone left Alaska to the Mexicans. The Mexicans ceded it to the Dutch sometime later who in turn gave it to the blacks who gave it to the Indians, who Indian-gifted it to the Mormons and then after taking it back decided to let the republicans have it in exchange for Sarah Palin's magical toilet paper which had protected her from teenage pregnancy.

After a 5 hour layover in LAX, the trail ended in Salt Lake City, Utah. Brigham Young named Salt Lake City after a local lake. Although initially imposing a 10% tax on all alcohol sales, with the advent of 4 Lokos followed soon after by prohibition, a flat 10% tax was assessed on everything. Salt Lake City is well-known today as a major exporter of single women and Polynesian football players.

The Mormon Trail was almost made into an educational computer game by Apple in the early 1980s, 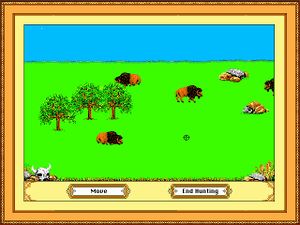 Famous for using every part of the buffalo, The Indians taught the Mormons how to lure buffalo by using the entire corpse of other dead buffalo as bait

but at the last minute plans were halted because nobody could find any educational value in a game about traveling old western trails. In early 2010, rumors circulating about the release of a Mormon trail App for the iPhone 4 were dispelled when noted game developer and MMPORG enthusiast, Utah senator Orrin Hatch, was arrested for DUI. A beta version of the game was reviewed by Computing World which stated, "You play as a banker or a doctor and the object of the game is to kill as many buffalo as possible, but the graphics of Chimchiminey Rock are pretty cool"

Tom Cruise will star in a made-for-tv remake of The Last Samurai adapted for the Mormon Trail, playing Captain James Allen, the noted commander of the first all-Mormon border patrol brigade. About his reasons for making the movie, Tom Cruise said, "Every country has a religion the citizens just don't understand because it seems stupid and expensive. And for us, that's Mormonism." Director, Mel Gibson, agreed with Cruise but for entirely different reasons.

The BYU "Cougars" were named in honor of the pretty, 14 year old, middle-aged wives who went for weeks without food or water on the trail. 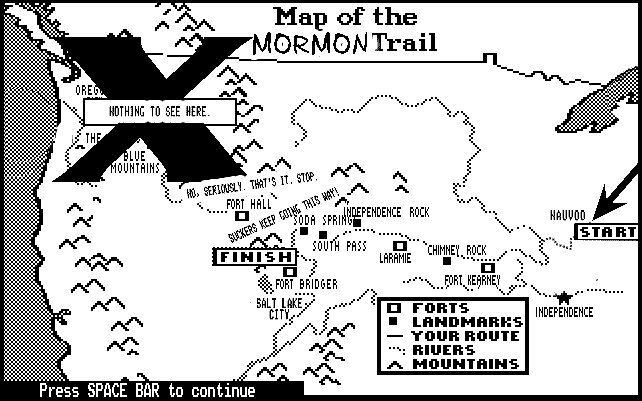