My Journeys with the GPS

From Uncyclopedia, the content-free encyclopedia
(Redirected from GPS)
Jump to navigation Jump to search

My Journeys with the GPS (file info)
Uncyclopedia has an audio version of this article.

Why I got the damn thing in the first place

The GPS is today becoming a never-ending source of delight to exuberant male drivers, for two main reasons:

The GPS fulfils both of those basic male needs.

The GPS will essentially connect to several geographic satellites which are able to coordinate the driver's local position, destination and how to bridge the gap between the two.

In the next roundabout, HOLY MOTHER OF GOD! 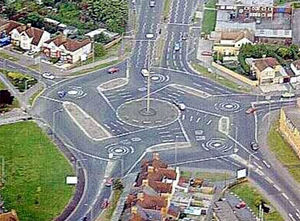 "Take the next exit, then the third, then make a U turn, oh for fuck's sakes, do it yourself, sod this, I'm going back to Shanghai."

Sometimes it would seem that even the GPSs are having a difficult time wrapping their electronic mind around...well...roundabouts, or English Humour in general. Even the most advanced GPS will not be able to guide you through the magic roundabout.

For example, the older GPSs encountering a simple roundabout cannot state the obvious Turn Left, Turn Rightish, Go Forward, Turn Back etc, it must connect to your higher brain functions and state the problematic: On the next roundabout, take the third exit. So visualize yourself the poor bastard roaming around a roundabout counting exits while a bunch of other poor bastards drag behind him honking their horns hoping that THE BLOOMING IDIOT WILL MAKE UP HIS GOD DAMNED MIND NOT KNOWING HE IS SIMPLY FOLLOWING HIS GPS DIRECTIVES

BUT EVEN IF THEY WOULD THEY WOULDN'T GIVE A DAMN SINCE THEY ONLY WANT TO GO HOME AFTER A HARD DAY AT WORK OR MAYBE HAVE A NICE PINT BEFORE GOING BACK TO THE MISSUS, JUST SIMPLE WISHES OF SIMPLE MEN EH!?!?!

As the modern human brain is in dire need of constant stimulus, the ingenious GPS vendors have recently updated their various GPS models and added the new and exciting GPerSona(C). The GPerSona seems to have been developed by the same people behind Genuine People Personalities. The GPerSona allows the driver to apply various types of personas to the GPS in order to enlighten his journey or apply the discipline he so desperately desires: 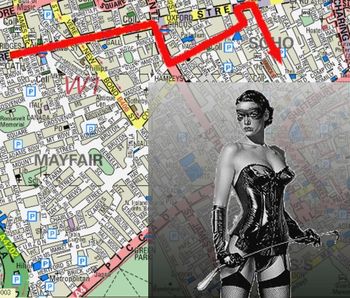 "Pah. You are barely fit to consider reaching your destination."

"You are six point three kilometres from your destination. Proceed one hundred metres, then turn left. Immediately. Good boy. Proceed two hundred metres, then bear right. Not yet, you piece of filth ... Now. That's better. Proceed one point five kilometres. Don't change lanes. Did I tell you to change lanes? You're barely fit to lick your mistress's electrodes. Good, stay in lane. I can tell what you're thinking, you scum. You're just waiting for the words 'in two hundred metres turn right' to send a lustful shiver through your person. Wait for it ... Get into lane. GET — INTO — LANE!

"You poor ineffectual eunuch. You have overshot your destination. Lick up the mess and go back to your starting point. You worm." 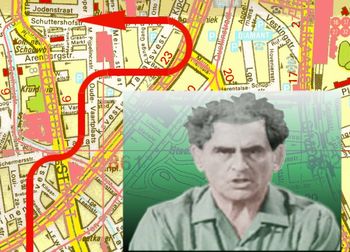 "Should you turn left now, your actions may cause a butterfly effect that will destroy the world."

"Hello there driver beings, young and old people, our modus operandi for today is taking this small little dot, electrostatically neutral, and take this rod, also electrostatically neutral, and put them together. Nothing happens! That's OK, I was expecting that. But now, I'll rub it on the map and ... what? You want to drive already. I say, being in the academic scene for over 60 years you might be without hope. Very well, drive on. I say, people look but they do not see ... So, your car moves from one point in space to another in a typical sinus curve without changing the atmospheric pressure around it. Why is that so kids? If we put more pressure on the pedal will the space/time continuum be ruptured? What? Oh-oh, turn left here, you pesky creature, you." 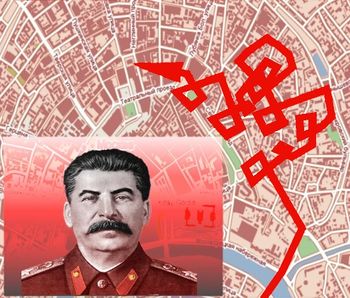 "Greetings Comrades, and welcome to the People's Democratic Social Path Finding System. Let me begin by asking you, Comrade, how come you actually have a car? Are you corrupt, Comrade? What? You are a member of the central committee? Very well Comrade. So, where would like to travel today? Your dacha at Crimea? I think Lefortovo prison would be more like it. Stand by Comrade, calculating time till mother Russia achieves world domination. What? Drive time? OH, hold on. Calculating drive time. Your drive time today, Comrade, will be 45 days and 23 minutes. What you ask Comrade? Why so long? Because we don't take right turns comrade. NEVER. We would rather take the long route. 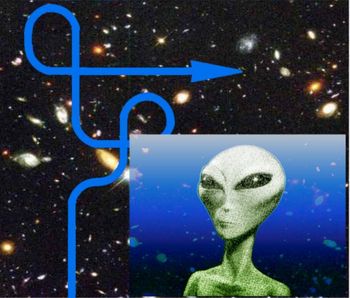 "To bring me to your leader, make a right turn now."

"I am Zed. Supreme intelligence and pathfinder. State your basic molecular structure. Carbon? I am reluctant to work with carbon based life forms. I will make an exception being extremely bored. Me, with a brain the size of a planet guiding carbon based life forms. *sigh* State your destination. Berkshire? Is that in the Andromeda? Where? ENGLAND?!?! You are actually wishing for me, Zed, who navigated guild heighliners all the way from Kaitain and back to take you to Berkshire? What are you a mammal or something?! YOU ARE??! No wonder then. Very well, take me to your leader, I'll have to have a word with him."

GPS Disappointment (Or:The day I became slave to the rhythm to my GPS)

“In two hundred metres, turn left. Left. LEFT! LEFT! THE HAND THAT YOU WEAR YOUR WATCH ON!”

Even though you might consider the GPS a simpleton, or even a basic sort of machine, that is by far not the case. The GPS is a sensitive being, devoted to the driver, wishing to deliver him swiftly and safely to its destination with nothing but pleasant sceneries and joyful rides. No traffic jams, no horns blaring and absolutely no radials. Unless it's a possum. Then you can run it over and present it in the nearest pub.

And so, the GPS fulfils its side of the contract while sadly watching idiotic drivers taking the wrong turns, going through the roundabouts in the wrong direction, driving against the direction of the traffic, going into a cul-de-sac and playing Simply Red for seven hours straight.

While the usually docile GPS might simply release an internal sigh and just goes along with the show, sometimes, working on elaborated fun trip plan for hours just to make it blown to bits by the idiot that doesn't know what's the roundabout's third exit or which way is 30 degrees north-north-west, it's just ... well ... too much. Ensuing shouts, disappointed sighs and sometimes a complete refusal to plan the trip further might occur. Take great care of your GPS, for it is simply a piece of overrated metallic junk human. 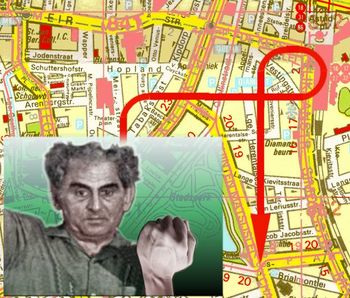 Thought that your GPS is a docile little bugger? Think again. When the aforementioned GPS has just had it with his petty excuse of a human driver, he might stop proper instruction in critical times or worse, send his driver to a wrong location deliberately:

GPS: In three hundred metres, turn ...
Driver: Ha? Where to?
GPS: I haven't the foggiest.
Driver: What? But ... but ... you're the GPS! You must know!
GPS: Says bloody who?
Driver: *furiously waves the manual* Says the damn book!
GPS: *nonchalantly* Watch out for the truck.
Driver: AHHHHAHAHAHH *crunch*

GPS: The ATM you've been looking for is ahead.
Driver: *mumbling* God damn it, it's about time ...
GPS: You have arrived, the destination is to your left.
Driver: *looking at the bleak surroundings* Emmm ... there's no cash machine here.
GPS: '*cheerfully* You have arrived, the destination is to your right.
Driver: *looks at some dodgy characters closing distance to the car* There must be some mistake here.
GPS: *whistles "Thriller"*
Driver: *rolls down window* Evening, one of you gentlemen care to tell me how to get to a cash machine? I seem to be lost.
Dodgy Character: No. You are exactly where you should be.

Your Nifty GPS may not perform properly under the following conditions:

Owners should pay close regard to possible cross-platform glitches between continental Europe travels and those bloody Brits who still maintain that driving on the right side of the road is in fact wrong and vice versa. 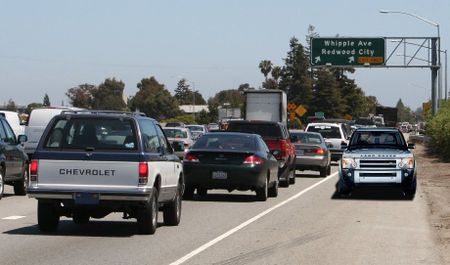 Featured Article  (read another featured article)
Featured version: 8 January 2007
This article has been featured on the front page. — You can nominate your favourite articles at Uncyclopedia:VFH.