From Uncyclopedia, the content-free encyclopedia
Jump to navigation Jump to search
The Chihuahua Provincial Examiner Online 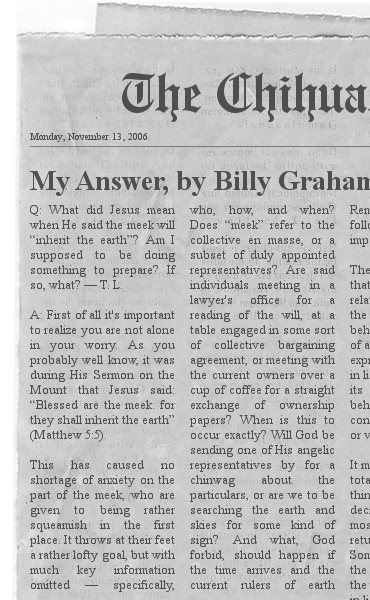 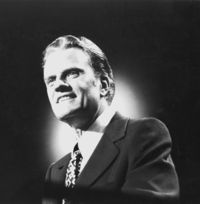 Q: What did Jesus mean when He said the meek will "inherit the earth"? Am I supposed to be doing something to prepare? If so, what? — T. L.

A: First of all it's important to realize you are not alone in your worry. As you probably well know, it was during His Sermon on the Mount that Jesus said: "Blessed are the meek: for they shall inherit the earth" (Matthew 5:5).

This has caused no shortage of anxiety on the part of the meek, who are given to being rather squeamish in the first place. It throws at their feet a rather lofty goal, but with much key information omitted — specifically, who, how, and when? Does "meek" refer to the collective en masse, or a subset of duly appointed representatives? Are said individuals meeting in a lawyer's office for a reading of the will, at a table engaged in some sort of collective bargaining agreement, or meeting with the current owners over a cup of coffee for a straight exchange of ownership papers? When is this to occur exactly? Will God be sending one of His angelic representatives by for a chinwag about the particulars, or are we to be searching the earth and skies for some kind of sign? And what, God forbid, should happen if the time arrives and the current rulers of earth decide to renege on the agreement?

These sorts of questions, beyond just being characteristic wussy obsessive niggling on the part of the meek, represent a fundamental misunderstanding of the nature of meekness, as well as the misapprehension that an earth will someday still exist to inherit.

"Meekness" usually conjures up images of Gandhi, or those negroes being dragged from diners during the sit-ins of the American civil rights demonstrations of the 1960s. Sadly, their quiet dignity in the face of testy businessmen just trying to free up some seats for paying customers during the lunchtime rush has nothing to do with meekness as Jesus Christ our Lord and Savior understood it.

And so long as we're on the subject, let me just state unequivocally and for the record, Jesus wasn't a negro. Anyone who purports otherwise obviously has never seen one of His portraits — white skin, blue eyes, blonde hair — a little long I might add, but as straight and true as His divinely-decreed heterosexuality. 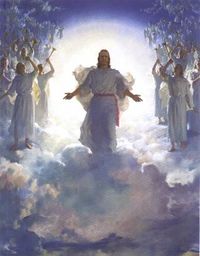 Dressed in a tunic of purest white, buoyed by a million fluffy white clouds, surrounded by a chorus of white cherubic angels. It is through the art of the great masters that the truth of His divine nature is revealed.

But let me be absolutely clear about this: "Meek" Jesus was no spineless, mincing sissy-boy weakling. Jesus never sat around on lunch counter stools, eating cold matzah ball soup and stale manna from heathen, and jabbering with the Philistines. He was out there, clearing the temple with His own two hands, throwing the vendors and money changers out on their asses (Bill — I realize that ass is in the Bible, but could we tone this down? — Ed.).

If you know Greek, and I'm talking about the language here, (Bill — don't beg questions you'd rather not answer. — Ed.) "meek" is from the Greek word praus, which describes a wild horse tamed for riding. I think it says "horse" anyway. It's been some years since I've formally studied Greek, though I'm still quite fluent if you get my meaning (Bill — Please. — Ed.).

In the biblical sense then, Jesus was a bronco, who would buck you ass-over-tea-kettle (Bill — I know that you've said before that your grandmother always used this expression, and she was a very religious woman, but c'mon, I can practically hear the wallets and purses snapping shut. — Ed.) if you rode Him the wrong way. He had a bad beattitude, and was not above drawing a line in the sand and daring you to step over it. Even after they crucified Him, He threatened to come back and raise an army of the dead to destroy the earth. And He will, so don't invest too heavily in real estate near the San Andreas fault. That cesspool of sinners will be the first to fall.

In summation, the lesson to be learned today is thus:

My advice is to be patient. Underline the phrase inherit the earth in your Bible and record some of my inspiring words as notations in the margins. Keep smiling, and smile even wider when a sinner treads upon your gentle spirit. Imagine Jesus — and just for the record, it's pronounced JEE-zuss, not HEY-zoose — skewering his pagan ass (!?!?!?!? — Ed.) on a weenie stick and roasting it on the fires of Hell to a nice crispy, golden brown.

And remember — God loves you, and life's greatest joy comes from knowing Him. Open your heart and life to Jesus Christ today.